This policy was turned into a formal law through the “Regularization Bill” passed by Israel’s parliament, the Knesset, on February 6 2017. The new bill authorizes the Israeli Ministry of Interior to expropriate land extraterritorially into the Palestinian state under occupation territory; representing nothing other than the official codification of colonialism into the domestic legal system of Israel.

By enacting this bill, Israel is explicitly defying the international consensus expressed by UNSC Resolution 2234 that passed on December 23rd 2016, which just like previous resolutions in the same line, reiterated the illegality of settlement building. Israel is further breaching the very basic principles prohibiting colonialism under international law; including the absolute prohibition of land annexation by force and the absolute prohibition of denying people’s right to self-determination.

The response of the broader international community and the main Arab regional actors to what Palestinians consider as “colonization plans” which lead to ” finally [burying] the two-state solution, replacing it for the consolidation of a one state/two-systems reality,” is astoundingly weak. Amidst the UN Security Council’s utter silence in the face of yet another brazen insult to the resolution it passed less than two months ago, the UN Secretary-General has feebly expressed his “regret” that the law has passed.

The United States, the official broker of the Palestinian-Israeli peace process, meekly observed that the law is “not good for peace,” while other members of the peace process quartet, the European Union and Russia, were no more assertive in defending the peace process that they purportedly broker.

The Russian Foreign Ministry simply found “Israel’s decision very worrisome” while the European Union is still reconvening a high level forum to discuss upgrading Israeli partnership in a meeting at the end of February. The League of Arab States has only warned against the move, calling for the international community to take a stand against “stealing Palestinian land.” Not one of the effective actors has taken any concrete action in response to this severe escalation. The Arab group must immediately introduce a Chapter VII Resolution at the Security Council to respond to the imminent threat posed by this legislation to Palestinians’ property and livelihood in the occupied West Bank.

The settlement building process was initiated in the very early years of Israel’s military occupation in June 1967. Today settlements are host to more than half a million Jewish Israelis on land over which Israel has no sovereignty. International law and bilateral agreements signed with Palestinians obligates Israel to immediately withdraw from this land. Instead of adhering to its legal commitments, over the past 50 years Israel has exploited legal detours to impose facts on the ground, sustaining their presence and making the land part of its territory. Settlements are planned with comprehensive infrastructure, including roads, water installations, and economic enterprises; making the occupation a lucrative business. The settlement industry comes at the primary expense of almost three million Palestinians who reside the area, whose fundamental human rights are egregiously violated by the settlement process. In areas where settlements are being planned and built, Palestinian homes are being demolished, entire communities are being displaced. The Israeli military administration builds checkpoints and roadblocks to isolate Palestinian communities from land where the settlements are built. Palestinian demonstrations against creeping annexation of their homes is met with disproportionate violence, leading to extrajudicial killings of hundreds of civilians each year.

By passing this new law, the current right-wing majority in the Israeli parliament has just went beyond the red lines that were never crossed by previous Israeli governments. They have voted on the appropriation of land currently being used by Palestinian communities. Settler groups often transgressed state authorization and trespassed on land privately owned by Palestinian individuals, arbitrarily settling on land in the West Bank. These privately made settlements, also called “outposts,” were until recently illegal according to Israeli domestic law. The new bill passed this week, “legalizes” these settlements built on what even Israel considers as private property, and allows the state to “expropriate them.” Generally, this signifies that Israel officially considers it has authority to legislate land ownership in the West Bank, and through such authority, it “legally” annexes the area. In practice, it means that any Palestinian land can now be freely seized at the whim of Jewish Israeli settlers; there is no longer any protection for the Palestinian presence in the area. The current Israeli government has codified the law of the jungle.

In 1949, when the General Assembly admitted Israel as a member state of the UN, Resolution 273 III, recalled already that Israel is breaching Resolution 181 demanding withdrawal from land it annexed beyond the partition plan, and refusing the return of refugees. Israel has not only disregarded these obligations but has instead relentlessly expanded to the remaining property of Palestinians within lands it grabbed during the 1948 Arab-Israeli War, under pretexts such as regulating absentee property and state land. While moving forward in annexing land in occupied territory, Israel continues to displace and demolish property owned by Palestinian communities under its jurisdiction. Palestinians from both sides of the green line are witnessing the same modus operandi of dispossession and displacement – leaving them to seriously question the pertinence of the historic compromise they made in the Declaration of Principles in 1993 to accept the two-state solution and recognize the presence of an Israeli state on 88% of their original homeland.

Israeli impunity constitutes a serious threat to peace and security. It undermines the Palestinian people’s faith in the law’s ability to redress the injustice they are facing, thus pushing them further to resist colonialism using all means available. These means sometimes include violence, seen as the only recourse left to protect their very existence within an ever-shrinking homeland. The stalling of the international community in taking appropriate action to put an end to Israel’s rogue behavior is undermining not only the credibility, but the very raison d’être of the international order. Article 1 of the Charter of the United Nations based this order on the commitment of states “to take effective collective measures for the prevention and removal of threats to the peace, and for the suppression of acts of aggression,” “in conformity with the principles of justice and international law,” and based on the “respect for the principle of equal rights and self-determination of peoples.”

In the interests of upholding the fundamental legal principles upon which the international order is based, CIHRS calls for immediate effective action by the international community to put an end to Israeli colonialist policies of expansion. First and foremost, Arab League member states must effectively and concretely act to protect Palestinian rights, and put an end to the hypocritical policy of rhetoric, replacing it with actions to uphold the law. The Security Council is obliged to immediately take measures under a Chapter VII resolution that imposes binding obligations on Israel to halt its gross and systematic breaches, and to fulfill its international duties.

Regional organizations and individual states are required to take all action necessary in order to ensure Israel abides by international rules, including cutting commercial and diplomatic ties if necessary. Israel should be given the choice either to immediately and completely withdraw from territory it occupied in 1967, allowing Palestinians to finally exercise their right to self-determination in their independent state, or ensure protection and full equality for all citizens in the land it controls. Furthermore, Palestinian refugees must be immediately allowed to return to their homes. In the absence of such measures respecting the minimal requirements of the law, there can be no justice and no peace. 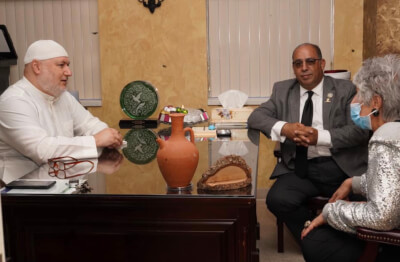 More than $200,000 in overpaid taxes refunded to Arab Americans under Treasurer’s program Activism