There is a lot of controversy over the importance of the Pineal Gland. What medical science knows is – it is the source of Melatonin. –John S. Fleming, MD

Modern science now confirms what yogis discovered thousands of years ago: that focusing on the Third Eye reactivates hormones located in the pineal gland in center of the brain. 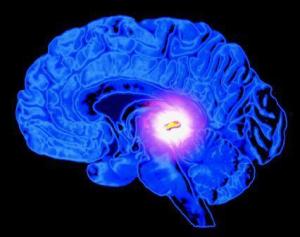 The pineal gland is also called the master gland and is about the size of a pea located behind the pituitary gland.

Unlike much of the rest of the brain, the pineal gland is not isolated from the body by the blood-brain barrier system.

The pineal gland works in harmony with the hypothalamus gland, which directs thirst, hunger, sexual desire and the biological clock that determines our aging process.
The pineal gland produces the hormone called melatonin which regulates human daily body rhythms that deal directly with the day and night cycles.

In humans, melatonin secretion increases after a person is placed in the dark and decreases after exposure to light. 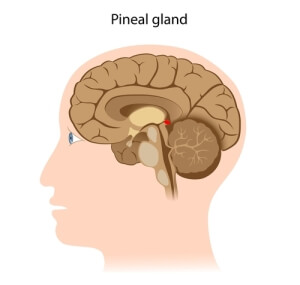 Melatonin production is high in infancy and childhood and declines with age.

The gland is relatively large in children and begins to shrink with the onset of puberty.

Modern imaging techniques reveal that the pineal gland becomes more or less calcified in most people.

Last month I attended a weekend introduction to Yoga Nidra at Amrit Yoga Institute, and ever since have been practicing at home with an Amrit CD  before climbing into bed just around midnight and I have gone from decades of 4-6 hours of fitful sleep to a solid 8 hours a night!

On the most basic level, Yoga Nidra relaxes, rejuvenates and renews the physical body…Yoga Nidra works by immersing your brain in the healing rhythms of the alpha state.

That reason alone transformed me into a Yoga Nidra practitioner.
René Descartes , a 17th-century French philosopher-mathematician concluded that the pineal gland was the seat of the soul.

Yoga Nidra is the master key for self-transformation. It can be used to initiate the power of the soul and to turn your hidden, inner potentiality into reality.

Being a spiritually driven political activist I will soon be attending a ten-day immersion in Yoga Nidra.

What is Yoga Nidra? By Kamini Desai, PhD at YouTube