For more than a week, the Israeli military has been severely restricting access into and out of the Palestinian village of Hizma in the West Bank, apparently in response to stone-throwing along a nearby road. Soldiers have been deployed at all entrances to the village, and physical roadblocks have been put in place barring vehicular access. At various points during this time, only registered residents of the village were allowed in, and men under 40 were not allowed out.

Restricting the freedom of movement of some 7,000 people constitutes collective punishment, which is prohibited under international law. While the first to suffer are the most vulnerable, those who have difficulty moving around to begin with, the restrictions affect all residents of the village and disrupt their daily lives. Yet again, this type of occurrence illustrates routine life under occupation and the Israeli military’s arbitrary use of its power in dealing with the Palestinian population. 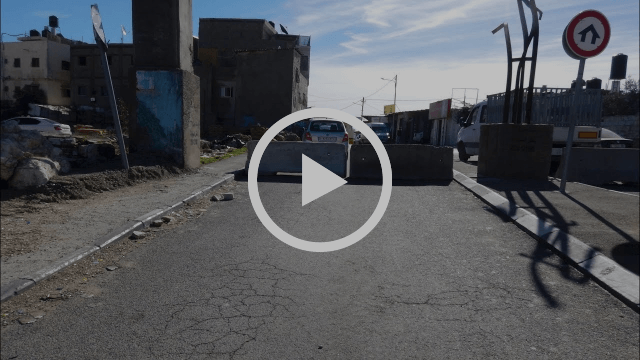 On Thursday morning, 18 January, the military replaced the boulders at the northern entrance with concrete blocks. Soldiers were stationed near them and allowed no one to enter or exit the village at that spot until 7:00 P.M.

The next day (Friday, 19 January), the military forbade any Palestinian not registered as a village resident to enter the village, from the morning until 9:00 P.M. Men between the ages of 18 and 40 were not allowed to leave at all. These harsh constraints disrupted a funeral and a wedding held in the village that day.

The next morning (Saturday, 20 January), the military reopened the two southern entrances to the village but left the concrete blocks in place at the northern entrance, so only pedestrians could get through there.
Yesterday morning (Tuesday, 24 January), soldiers were again deployed at all three entrances to the village and a gate was installed at the southern entrance that lies close to the community of Tublas. Only registered residents were allowed into the village. The roadblocks forced residents to drive on treacherous dirt tracks. This state of affairs continued today (Wednesday, 24 January).

The military has already been known to close off the entrances to Hizma. Most recently, in March and April 2017, the military closed off the northern entrance to the village for 40 days and the two southern entrances for 20 days.

The village of Hizma is home to over 7,000 people. It lies northeast of Jerusalem, most of it on land defined as Area C, which is under full Israeli control. Over the years, Israel has expropriated large swathes of land from the village. These have been used to establish the large settlements of Pisgat Ze’ev and Neve Ya’akov to the west, as well as the Separation Barrier, which cuts off the village from East Jerusalem. To the north of Hizma, Israel established the settlement of Geva Binyamin, and the settlement of Almon east of the village. Some 30 hectares of land were expropriated from village residents and used to pave Route 437, which runs close to the village.