Three weeks after this American writer’s first of eight trips to both sides of Israel Wall in Palestine, with a little help from a few friends in Florida, I birthed WAWA with this Mission Statement:

WAWA/WeAreWideAwake is my Public Service to America as a muckraker who has journeyed [8] times to Israel Palestine since June 2005. WAWA is dedicated to confronting media and governments that shield the whole truth.

It was about six months ago that I heard Charlie Rose on his PBS show say something like; “We have yet to begin to imagine the potential of the Internet.”
When I began writing for WAWA about three months ago, I IMAGINED it to be an instrument to provoke thought, engage a dialogue and stimulate American’s to do something about the state of our Union and for all our sisters and brothers in Israel Palestine.
I had hoped to be challenged by some conservative and many fundamentalist Christians, but so far, they remain mute.  Perhaps, they just haven’t read me, so if you know of any right wing neo-con Christian types I would appreciate any connections you can make with WAWA. Debate is great and all opinions are welcome but no mean-spiritedness will be posted. 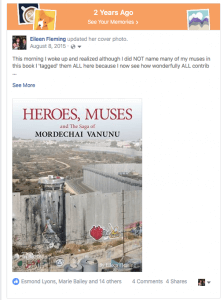 In my third book, I wrote in reference to my first interview with Mordechai Vanunu, Israel’s nuclear Whistle Blower:

“THIS is why you should never meet your heroes; they can be jerks like anyone else!”

As Bob Dylan sang, “I’ve already confessed – no need to confess again” so to learn why I wrote that ten years ago you will have to read, “BEYOND NUCLEAR: Mordechai Vanunu’s FREEDOM of SPEECH Trial and My Life as a Muckraker 2005-2010” available at KINDLE.

I began documenting the saga of Mordechai Vanunu during that meeting and the stories he told me about his childhood through 18 years in prison, crisis of faith and from my being electronically present to his crisis of identity at the culmination of his under reported freedom of speech trial are also included in that book.

This book furthers the Vanunu saga…

In mythology, the Muses were nine goddesses who symbolized the arts and sciences. The story goes that the Muses were the daughter of Zeus the God of the Sky and Mnemosyne the personification of memory.

If you muse about something, you’re giving it serious thought and you may muse on certain ideas for years….

Once upon a time not so very long ago the winners wrote history; but the digital age changed that, which is why you are reading The Vanunu Saga!

I began documenting the saga of Mordechai Vanunu in 2005 after meeting Israel’s Nuclear Whistle-blower ‘by chance’ on the first evening of summer.

It was while researching for my first book KEEP HOPE ALIVE that I stumbled upon Mordechai Vanunu’s incredible story and wrote him into my first and so far only historical fiction.

I have yet to read or hear a word from the American press about Vanunu who had worked in a very compartmentalized position in the secret underground Dimona nuclear research center in the Negev. The nuclear plant had a sign outside claiming it was a Textile factory and it seems that when Vanunu finally realized he was involved in the horrific work of manufacturing weapons of mass destruction, he shot two rolls of film inside of the restricted areas. Seems security was very lax and this low level tech was able to obtain the keys in the shower room that opened the doors to what Israel has not admitted to.

Vanunu quit the job and leaves Israel and carried around the undeveloped film for nearly a year as he traveled throughout Europe. He ended up in Sydney, Australia and converted to Christianity. A few weeks later he shared his story with a British reporter and Vanunu and the reporter returned to London. While the London Sunday Times was verifying his story, Vanunu mysteriously disappeared. The photos proved the fact that Israel had become a major nuclear power, but not a word has been heard from my government or press!

The Sunday Times reports this incredible news that Israel’s underground plutonium plant has material for two hundred nuclear warheads of advanced design, but not a word have I read about it or heard from the US media! It makes me wonder about all the iron curtains the media and government have raised as a shield from the truth.

A few months after writing that chapter and during my first of eight trips to both sides of The Wall in Israel Palestine, I met Vanunu and became a reporter because he told me:

‘By chance’ I was in Jerusalem on 18 November 2013, and walked with Vanunu on his “short walk” through east Jerusalem, which included a hike up the Mount of Olives, to The Wall at Abu Dis, through the Valley of Olives and Peace Park to Jaffa Gate.

Heroes, Muses and The Saga of Mordechai Vanunu concludes:

On 4 August 2015, Vanunu wrote at Facebook: So time to end this case, and to let me start new life with my Wife in Norway, we will be in the court again next month…to end this case, to send me free.

“Life is what happens to you while you‘re busy making other plans” as John Lennon sang and Lennon is another muse of mine –but that’s another saga!

Vanunu is currently reporting his own Saga at Twitter: 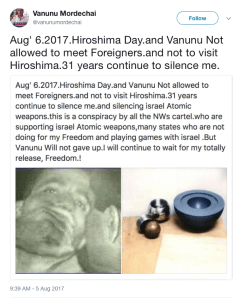 We pray Godspeed on Vanunu for being his own media as we applaud the Comment @VanunuMordechai from @SidneyWinston: You have freedom to tweet, to swim in the sea, to eat healthy food. Relax and enjoy your comfortable life. In Israel, which underscores the John Lennon quote above which concluded Heroes, Muses and The Saga of Mordechai Vanunu! 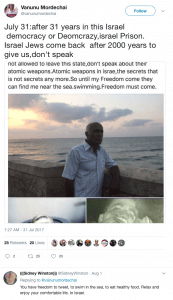 7 Steps To Be The Hero In Your Own Life courtesy of FinerMinds.com

1. Find the bold and courageous you

2. Free yourself of the ‘negative’ emotions that imprison your spirit

Acknowledge all emotions as valid and supportive to your current situation. Ask yourself: how does this emotion serve me, and my purpose? What is its benefit? By exploring emotions as they occur they will no longer control you.

3. Believe that you can and will make a difference

Amidst the hundreds of criticizing voices, there is a faint, serene voice telling you that YOU are premium and can do anything you set your mind to.

4. Be gentle and forgiving of your mistakes – it’s all part of the process

Don’t beat yourself up for what’s already done. That’s valuable energy that could be spent on realizing your potential.

5. Find your truth and then express yourself in your own unique way

Discover your authentic voice and then become clear on how to express it. What is really important to you? What gifts do you have to share with the world?

6. Let your intuition guide you

Practice tuning in to your ‘hunches.’ Balanced with some perspective, their wisdom will lead you down your soul’s path.

7. Pay attention to synchronicity and patterns that link events together

Learn to recognize the relationships amongst things…By giving yourself permission to be your own hero you can begin to play an active role shaping your destiny. 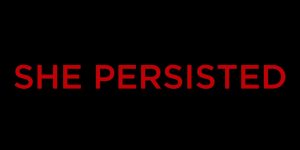 This American concludes with sage advice from Mother Teresa:

Two months in Palestine: A Snapshot of oppression Arab World