Top iTunes podcasts on Arabs, Middle East. Podcasts offer an easy way to avoid the biases and bigotry of the mainstream American news media. All you have to do is create an account at iTunes (most people already have one), and “subscribe” (usually for free) to the podcast on your Apple or Android device. It’s that easy. And by doing that, you are striking a substantive blow against the vicious and ugly bigotry against Arabs and Muslims that drives and dominates the mainstream American news media

If you are like me, you are sick and tired of the daily barrage of bigotry against Arabs and Muslims from the mainstream American and Western news media.

It used to be that the most vicious bigotry came from online websites or publications produced by Arab and Muslim haters in Israel and in the pro-Israeli community in America. But that has expanded over the past 20 years into outright hate and ignorance from people who claim to be objective journalists and from columnists and op-ed writers who thrive on Arab and Muslim bashing.

Publications, be they in print, broadcast or online format, like the Huffington Post, Politico, the Washington Post, the Daily Beast, The New York Times, the New York Post, the New York Daily News, the Daily Kos, the Chicago Tribune, FOX News, the Wall Street Journal, Real Clear Politics, CNN and so many others, are inundated with bigotry and bias that usually is undisguised and brutal but sometimes subtle and offered like it is fact.

You need to avoid commentators who base their analysis on subtle anti-Arab and anti-Muslim racism that is driven by politics and Western media acceptance, like those provided by Christiane Amanpour and Fareed Zakaria. They are both so biased and the bias is offered like fact, very subtle but in the end, it is designed to undermine Arab rights, especially the rights of Palestinians. Oftentimes, their narratives are intended specifically to defend Israel by minimizing Israel’s atrocities and war crimes, things the mainstream media refuses to cover.

(I don’t know how many times I have to tell people Fareed Zakaria is NOT an Arab journalist when we discuss the bias against Arab journalists that exists in the mainstream news media.)

Definitely, avoid the New York Times columnist Thomas L. Friedman. What he does is minimize the viciousness of the hate against Arabs and Palestinians, distinguishes them from mainstream Muslims (most of whom are non-Arab), and offers a rock solid defense of Israel while pretending to be an Israeli critic. (Friedman only criticizes Israel mildly, and softballs questions to Israelis. Israelis still get angry with him not because he is fair or balanced, but because they oppose ANY KIND OF criticism of Israel in the mainstream news media.)

It’s nauseating, especially when the comment sections of these publications (letters to the editor, and comment postings) are so stringently regulated that your feedback is either rejected or watered down when edited.

You think you don’t have a choice to get access to other views on the Middle East, Arabs and Muslims that challenge this bigotry, but you do. One way is to support podcasts and the podcasting of bloggers and Middle East, Arab and Muslim writers and columnists.

You can’t fight bigotry in the mainstream news media simply by complaining about it. You have to do something. You need to take action. And you can do it without allowing your anger to push you to violence. You don’t need to blow yourself up, as the biased mainstream media suggests you are likely to do if you are Arab or Muslim.

You can continue to protest the bias that you face in scanning the print, broadcast and online media, even if it is not totally effective. But you need to step it up by recognizing that your time is valuable. The time you spend reading and understanding has value. Your visits to online sites has real measurable value. If you only visit the haters, you are only helping them. But, if you expand your experience to include positive and accurate sources on Middle East topics, on Arabs or on Muslims, you can be far more effective in fighting back.

Give the alternative media that provides more balance and accuracy your support. Learn how to engage this media. And remember, it’s not about whether you agree or disagree with the source of the media, but rather how the media source presents your interests.

There’s a significant difference. The issue isn’t disagreement or debate. The issue is the use of hate, racism, stereotypes to fill the void. In other words, haters often use racism as a weapon to assault things they dislike simply because the facts they have fail to undermine the points of views they disagree with.

When the haters can’t use facts to confront Arabs or Muslims, they use hate, racism, stereotypes, and vicious libel (print) and slander (oral).

Another strategy used by the haters is to corral and control the dissidents. In other words, the haters actually recruit Arabs and Muslims to write, but severely edit or place severe restrictions on what can or can’t be written or discussed. The haters want to chose who will represent you in the one-sided debates they foster and engage.

It’s hard to blame those who participate in this system. They have no choice. It’s much like the Arabs and Muslims who play “terrorists” in Hollywood movies and television series. If they didn’t play the “terrorists” as actors, they would get no work. It’s not like the Arab or Muslim World are producing movies and films that employ them. They, and you, have been abandoned by the Arab and Muslim Worlds, by governments that have one agenda to control you and protect their own corruption and tyranny. And the mainstream media actually partners with these tyrants and corrupt regimes to achieve their own mutual agendas.

Great sources for information include BBC and The Guardian, although their podcasts (available on iTunes) often focus on other topics besides Arabs, Muslims and the Middle East. But when they do focus on Arabs, Muslims and the Middle East, BBC and The Guardian offer the best balance and indepth truth not often found int he biased American and Western news media.

Now, you can recognize all this, and you can just sit back and continue being a part of the system of anti-Arab and anti-Muslim hate in America. You can accept the racism and “just get used to it” because it is so inundating in daily American life.

Or, you can do something about it.

Break the habit of turning towards the racist hatred. Replace the time you spend reading the hate, such as at the Huffington Post by reading other other sources, like this news blog and so many others that are available.

Here are some of the best podcasts that you can download from iTunes and other online sites that offer insight that offers a more respectable discussion and debate of the issues.

Remember, the power to change the hatred in this world is in your hands. “The pen (and microphone) is mightier than the sword.” Join the revolution that recognizes this power and how to best use it.

Here’s a list of some of the podcasts I would recommend, in no order or priority:

Between Arabs is produced by Nora Goda and offers discussion on an array of topics related to all Arabs (Christian and Muslim) and on the Middle East. According to mvslim.com Nour M. Goda, M.Ed. is a Syrian-born, Muslim Arab American and native New Yorker. She is founder of Between Arabs, a blog and podcast on iTunes and Stitcher™ Smart Radio, where she discusses sensitive and controversial issues with and about Arabs and Muslims of the West. She offers interesting insight on many of the topics we face as Arabs and Muslims everyday in America. Here is her website. www.betweenarabs.com. This one is on iTunes. 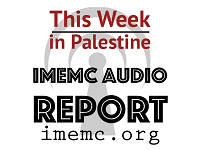 The International Middle East Media Center offers a must-subscribe podcast called Palestine Today that offers insight into the Middle East conflict and factors driving events and suffering and successes there. It’s one of the few places to get good coverage of life in Gaza and in Occupied Palestine. The website link to the podcast page is imemc.org. This podcast is not on iTunes but you can go directly to the podcast page to subscribe.

The Electronic Intifada has a podcast that focuses on Palestine and the Israeli occupation, offering insight into most topics and aspects of daily life and strife. This podcast is available on iTunes.

Palestinians Podcast offers insight into the daily life of Palestinians that you won’t find in the mainstream news media. The stories seek to “re-humanize” the Palestinians who receive the brunt of the politically driven pro-Israel anti-Arab and anti-Muslim racism and hate. This podcast is also available on iTunes. Their website is at www.palestinianspodcast.com.

The Arab Daily News Podcast. Of course, this website and author also offers weekly podcasts on Middle East topics (and mainstream topics) with a heavy focus on Arabs and Muslims. The podcast is available on iTunes and also online at RayHanania.Podbean.com.