We need to place a $20,000+ order for Palestinian pottery to restock and get ready for holiday sales, as well as other handicrafts and solidarity items, including sweatshirts and olive oil.

And then there are the books… Independent bookstores are closing all around the United States. Don’t let the one-of-a-kind Middle East Books and More follow that path. Help it expand instead.

If you could see the customers who walk through our doors—visiting from around the country or from a nearby university—who say, “I can’t believe this store exists and I’ve never heard of it!” Then they take a copy of the Washington Report and….the rest, as the saying goes, “is history.” But it’s actually the “future”—and the way we’ll help bring peace to the Middle East.

If you’re in town come to our sidewalk Al Mokha Yemeni coffee tasting, starting at 9 am on Saturday, Aug. 6. Visit MiddleEastBooks.com and place an order yourself. Our new bookstore director, Nathaniel Bailey, started work today. Go ahead—make his day.

Help us print and mail the Washington Report on Middle East Affairs magazine and get vital books about the Middle East into the hands of as many readers as possible.  Help us maintain our website, which faces organized denial of service attacks from people who don’t want readers to have free access to decades of unbiased information.

For more than three decades, the Washington Report has provided Americans desperately needed balance, context and nuance to the U.S. foreign policy conversation. Along the way, we’ve also helped create, support and unite a growing community fighting for peace, justice, human rights and the rule of law at home and abroad.

We’ve heard variations of this personal story by a typical reader (we’ll call him Joe) for nearly 35 years: “I felt like I was alone in [fill in the blank with any city and state]. I knew something was wrong but I couldn’t even discuss U.S. foreign policy or the Middle East with my [family, friends, classmates, and coworkers]. I’m fed up with biased, bought-and-paid-for politicians and media.  When I came across the Washington Report at my [house of worship, library, bookstore, conference, or protest] I realized I am part of a vibrant—and growing—community.” 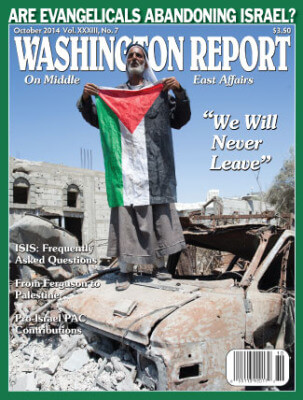 Like Joe, activists used to feel isolated and under-represented. Today there is growing coordination, solidarity and strength—despite a chronic lack of funding. Indeed, more and more excellent journalists, bloggers and websites are providing news and opinion pieces rarely found in corporate media. The Washington Report helps this information find its way to people like Joe—people who are searching for truth, and who are now telling us, “I read each issue cover to cover.”

We need to raise $40,000 by Sept. 15 so that Middle East Books and More can order new books, pottery and olive oil in time for our holiday rush, and the Washington Report can pay the printer, landlord, and other bills. We ask you, the community we’ve served for nearly 35 years, to come through for us.  Let’s all work together for peace and justice before and after the elections. Please donate the funds we need to continue to tell the truth for decades to come. No contribution is too small (or too large!).

Thank you so much for your support. We wouldn’t be here without you.

The American Educational Trust depends on contributions from people like you who care about peace, justice and truth. Help us print and mail the Washington Report on Middle East Affairs magazine and get vital books about the Middle East into the hands of as many readers as possible.  Help us maintain our website, which faces organized denial of service attacks from people who don’t want readers to have free access to decades of unbiased information.

Israel’s Security, Palestine’s Liberation and All that Jazz Arab World