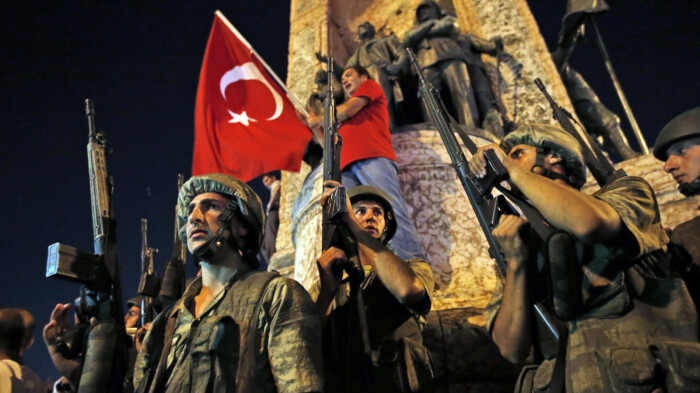 Turkey: Algerian and Egyptian Scenarios Failed. A Turkish model that today excelled to end demo-ctatorship mentality, and establish a working democracy in Turkey — ironically led by an Islamist president…

Turks cast their last democratic ballots in November, 2015 under an overcast political sky and the smell of bombs in the southern cities, Ankara and Istanbul. It had been rough months for the Turks since the landslide win of the AKParti in the early parliamentary election. President Erdoğan emerged then, once again a stronger ruse politician and tactician, presiding over the country since summer of 2014. He decided to reform the constitutional attributes, arguing for a presidential system in the new Turkish Second Republic.

All the analysts know that the army is still the Republic itself, despite the timid political change that President Erdoğan has been trying to purge. His domestic and external detractors and ideological opponents reproach Erdoğan for acting like a tyrant and an Ottoman Sultan since he entered Beştepe Palace in Ankara.

However, the head of the beast Turkey’s military regime fell after the emergence in 2002 of the AKParti, a neo-Islamist party and a solid and determinant political player in country post-military regimes — hence the birth of a Turkish democratic model. Yet, the regime and the creation of a parallel state remained intact; despite the counterattack from Erdoğan to marginalize or expel them from sensitive circles of the State’s institutions, like the Police, Education and Justice.

Last night’s failed putsch, a scenario was a reminder of the lines from the Algerian and Egyptian generals’ 1992 and 2013 coups when they sent President-General Ben Djeddid into forced retirement and put  a democratically-elected President Dr. Morsi in jail. At that time the generals had the support of the West to stop the democratic process and rule the country after the coup, but Washington at that time applied either “radio silence” or the “musical chairs dance” approach.

There are some similarities between last night’s failed coup and those military coups in Egypt and Algeria. These three countries have armies that have been in power since they gained it, and their armies have appointed presidents of their own. Turkey had four coups, Egypt one but never left the power, and so Algeria. High-ranking Turkish military, like their Egyptian and Algerian counterparts, reverted to ghost C.E.O.s controlling the economy of the nation à la rus(s)e.

The three armies are the core of the societal and political structure of their respective countries and serve as referee in the political process.

Thus in Algeria for instance, people are not really fed up with army rule, despite the fact that they do not trust them, but they regard them as less evil or, simply, bear the “why should I care” attitude. As for military accountability, the Algerian army excelled in saving the country and making it sound for the people at the end of Algerian institutions.

Yet, the Egyptian army looked to their counterparts in Algiers’ 1992 scenario that led to the July, 2013 coup against Egyptians’ will. This was not going to be the end of Egypt’s political institutions, but it made it look like the “Pakistan” of the region. Some Egyptians looked at Turkey of the 60’s, 70’s and 80’s, to the point, until 1997 against an Islamist democratically-elected government led by Dr. Premier Neçmettin Erbakhan.

Premier Erbakhan later was seen as the founding father of neo-Islamism in Turkey and the Muslim world in general, and President Erdoğan and his predecessor Abdallah Gül cultivated his legacy.

In 1992 the Algerians’ argument carried some weight, unlike Egypt in 2013 and Turkey, 2016, but that does not hold today. They might play the national “unity and stability” elements, but they cannot scare the people or even the West anymore over the “Green Peril,” because what the West is facing in its cities now, Paris, Brussels, Nice and Orlando, is the nightmare of “Red Peril” from ISO.

The so-called “Green Peril” has become a major player in the post-2011 Arab revolts in light of the Arab Spring. By contrast, few Turkish, Algerian and Egyptian generals are caving in to Washington and Paris agendas, which has become clear since MENA’s domestic affairs have drastically changed since the tragedy of 9/11 and the resurrection of the Arab uprisings against social injustice and political tyranny.

The West once looked at the Islamists as a serious strategic ally in the region, notably the “Brothers in Tunisia, Egypt and virtually with the AKParti in Turkey, though President Erdoğan has become a “bad boy” leader in the eyes of the West, who want him to be a puppet with Ray-ban glasses and Francesco Samalto suits like the ones across the region.

Understandably the generals in Cairo and Algiers are not ready to share power, as in fact they have been enjoying absolute power since 1952 and in Algiers since 1962, unlike the Turkish generals, who showed some political maturity and civility like their counterparts in Spain post-Franco and Chile post-Pinochet.

Analysts in think-tanks in Turkey hoped that generals in Cairo and Algiers would be inspired by the Turkish model, a model that both parties (military-Islamists) in the new political equation seem to like. But as of last night’s failed coup, Islamists, Nationalists and Liberals didn’t look at Erdoğan’s governing stye, but to bury the putschists’ political appetite.

Even though the Egyptian and Algerian political leaders, media and elite alike do not have a healthy democratic culture like the Turkish, it is a long process in which the Turkish Islamists and liberals are showing progress that saved their President’s future — a credit to the Turkish voters, political parties (liberal and nationalist) alike, adding the media’s liberal role that all stand against the failed coup from the early hours.

Unlike in Egypt and Algeria, the so-called democratic politicians and media supported the military coups, and as a result, they lost their credibility and political identity.

Today a few generals in Turkey lost the respect that their fellow citizens held for them before last night’s face-off. In Algeria during the May, 1991 sit-in and in Egypt, the July 2013 coup, people chanted: “The army is a corrupt and a dirty hand.” Thus, last night Turks chanted: “Military in the barricades!” Hence the divorce was pronounced, because this odd couple in politics does not have the same perspective, particularly after the harsh policies of General Es-Sissi toward the Brother leaders and President-elect Dr. Morsi in the last three years.

In Egypt and Algeria, the army sees stability before change, and the people believe real reforms rhyme with real reformists. Meanwhile, the Islamists’ strategy of side-stepping à la Turque doesn’t seem to be working so far.

For better or worse, but mostly for the better of the region, a new regional order is rising: Egyptian and Algerian generals are concerned about that, i.e., the divided Iraq, Syria, Yemen, Sudan, Somalia, an uncertain Libya, and a new regional foreign policy determinant with Tel-Aviv and Tehran.

So Egyptian and Algerian generals, if they contain their egos a little bit, can look at the Turkish model that today excelled to end the “demo-ctatorship” mentality and establish a working democracy in their country — ironically led by an Islamist president.