In June The New Yorker reported on a 13 February 2017, White House meeting regarding a ‘secret’ letter concerning Israel’s nuclear arsenal under the title:

Staff writer for The New Yorker Adam Entous described a tense scene in the West Wing as the Israeli delegation pressured POTUS Donald Trump to sign the letter stating:

The Americans had other pressing concerns—later that day, Michael Flynn, the national-security adviser, would hand in his resignation letter—and they didn’t appreciate feeling as though the Israelis were telling them what to do. “This is our fuckin’ house,” one of the Americans snapped. 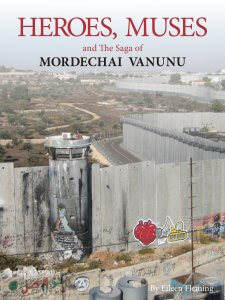 In “HEROES, MUSES and The Saga of Mordechai Vanunu” I reported:

However, the Mainstream Media still has not reported on these documents which detail the discovery of Israel’s nuclear deceptions, debates over Israel’s lack of candor and efforts to pressure the Israelis to answer key questions about the Dimona during the Eisenhower years….

At the end of August 2014 and after 45 years of top-secret status documenting America’s colluding role in Israel’s nuclear ambiguity, the worldwide ‘secret’ ended with declassified papers made public by the Interagency Security Classification Appeals Panel (ISCAP).

In March, President Obama decided to release the documents revealing American delegates agreeing to Israel’s refusal to sign the Non-Proliferation Treaty, refusing an American inspection of the Dimona nuclear facility and a deal which would have seen the delivery of strategic ground-to-ground Jericho missiles to Israel in exchange for their signing of the treaty. [1]

These declassified documents exposed cabinet secretaries and senior advisers to then President Richard Nixon acceding to Israel becoming a “threshold nuclear state” and withdrawing from a plan to block Israeli nuclearization ahead of a meeting with then Israeli Prime Minister Golda Meir at the White House in September 1969.

One of the documents was written by senior officials in the Nixon administration in a working group led by National Security Advisor Henry Kissinger, exploring the nature of the Israeli nuclear weapons program known as “NSSM 40.”

The existence of the document and its heading were known but the content had so far been kept ‘secret’ almost as ‘secret’ as Obama’s previous playing along with the 4-decade-old Israeli nuclear ambiguity/deception policies.

On 2 October 2009, The Washington Timesreported that Obama agreed to keep Israel’s nukes ‘secret’ and reaffirmed his pledge to maintain the agreement he made when he first hosted Israeli Prime Minister Benjamin Netanyahu at the White House in May 2009.[2]

Because of the understanding America has not pressured Israel to disclose its nuclear weapons or to sign the nuclear Non-Proliferation Treaty, which would require Israel to give up its estimated several hundred nuclear bombs.

At a White House meeting on 25 September 1969, between President Richard Nixon and Israeli Prime Minister Golda Meir, the United States passively accepted Israel’s nuclear weapons status as long as Israel did not unveil publicly its capability or test a weapon…[End Book Excerpt]

Israel crossed the nuclear threshold on the eve of the Six-Day War, in 1967… But, by the fall of 1969, when Golda Meir, Israel’s Prime Minister, met with Richard Nixon at the White House, Israel’s possession of nuclear weapons was a fait accompli and the two sides reached an unwritten understanding: the Israelis would not declare, test, or threaten to use their nuclear weapons, and the Americans would not pressure the Israelis to sign a landmark international nuclear-nonproliferation treaty known as the N.P.T….

The Israelis first started to feel as though the unwritten Meir-Nixon arrangement was no longer sufficient during the Presidency of George H. W. Bush, when, after the first Gulf War, in 1991, world powers talked about the possibility of creating a zone in the Middle East free of weapons of mass destruction, including nuclear arms….

Ahead of a nonproliferation conference in 2010, Netanyahu became concerned, once again, that Israel could come under international pressure to disarm. In response, Obama made a public statement that echoed the contents of the secret letters, without revealing their existence…. [End Entous]

In “Beyond Nuclear: Mordechai Vanunu’s FREEDOM of SPEECH Trial and My Life as a Muckraker 2005-2010” I published Vanunu’s UNCENSORED statements.

Regarding the Dimona nuclear facility Vanunu said: “There were more than 200 atomic weapons in 1986, and they started to produce the most horrible of all weapons; thermonuclear, in lying and in cheating the world and all of its citizens. So I said to myself it is impossible to keep these secrets. I must report about them and to try and stop it.”

“In Israel, a life sentence is 25 years. Even murderers go free after 17. They imposed the same restrictions on me that Palestinians receive; no human rights at all. No phone, no visitors except family and only through an iron grill. No vacation, no holidays, no gifts. Even murderers get out for vacations! I was locked up for 18 years and still cannot go on vacation, I cannot leave and that is all I am asking, just to leave here.

“The only way to peace is peace; the only way is non-violence. The only answer to Israeli nuclear weapons, their aggression, occupation and oppression, the wall and refugee camps is to answer them with truth and a peace-full voice. When I became the spy for the world I did it all for the people of the world.

“The USA needs to wake up and see the truth that Israel is not a democracy unless you are a Jew. Israel is the only country in the Middle East where America can right now find WMD’s. America can also find where basic human rights have been denied Christians, right here in Israel….

“Kennedy insisted on an open internal inspection. He wrote letters demanding that Ben Guirion open up the Dimona for inspection. The French were responsible for the actual building of the Dimona. The Germans gave the money; they were feeling guilty for the Holocaust, and tried to pay their way out. Everything inside was written in French, when I was there, almost twenty years ago. Back then, the Dimona descended seven floors underground.

“Kennedy demanded inspections. When Johnson became president, he made an agreement with Israel that two senators would come every year to inspect. Before the senators would visit, the Israelis would build a wall to block the underground elevators and stairways. From 1963 to ’69, the senators came, but they never knew about the wall that hid the rest of the Dimona from them. Nixon stopped the inspections and agreed to ignore the situation. As a result, Israel increased production. In 1986, there were over two hundred bombs. Today, they may have enough plutonium for ten bombs a year.”[End Book Excerpt]

Only Israel knows how many WMD Israel has today.

POTUS Trump colludes in Israel’s nuclear deceptions as have all American presidents beginning with Eisenhower.

Everything Mordechai Vanunu knew about Israel’s WMD has already been reported— just not recognized by the mainstream media.

And Israel’s nuclear whistle blower Mordechai Vanunu continues to grow a cult following at Facebook, Instagram and Twitter where he reported on his July move from Jerusalem to Jaffa still “waiting for freedom.” 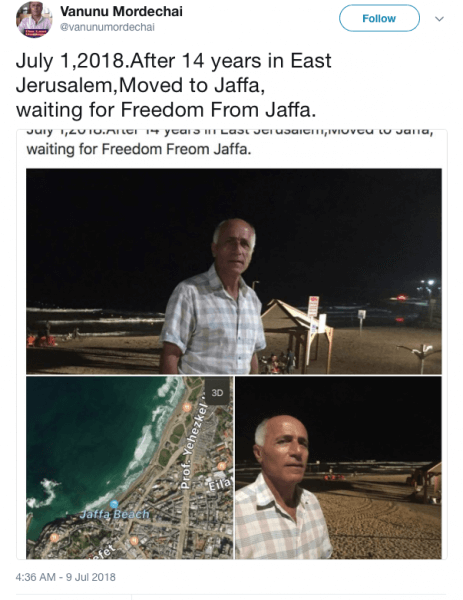