UPDATE: On 18 January 2017 Israel convicted Vanunu on one count of meeting with foreigners and will sentence him in March*

On July 4 in Jerusalem, Mordechai Vanunu was indicted again for violating the terms of his 2004 release from prison.

Vanunu was also indicted because he moved into a different apartment [in the same building] without informing the police, and because he was caught meeting with two foreign nationals three years ago!

From the big trial of exposing Israel Atomic weapons secrets to new charges about moving apartment without reporting, for meeting foreigners, and for speaking to Israel media about Dimona Nuclear secrets.

So the trial started and will continue in next months… 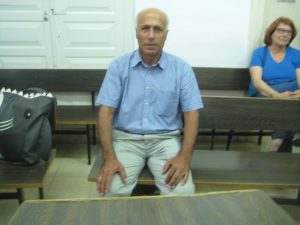 In the 9 May 2016, article Mordechai Vanunu: Indictments and Vendettas it was reported that Vanunu’s Attorney Avigdor Feldman told Haaretz:

Filing an indictment for a single meeting with two foreigners that occurred three years ago,  for moving [apartment] at the same address, and in the end for an interview he gave to Danny Kushmaro at Channel 2, which passed the censor, is a record low for the state in its persecution and abuse of Mordechai Vanunu. I’m ashamed, and whoever filed this indictment should be even more ashamed.

More ashamed should be The Media who have ignored Vanunu’s Human Rights struggle in light of the fact that on 21 April 2016, Israel’s Supreme Court was to rule on Vanunu’s 8th petition to end the Human Rights restrictions against him so that he could leave ‘the only democracy in the Middle East.’

Most ashamed should be ALL who could and have NOT done anything since 23 September 2008, when the Jerusalem District Court reduced Vanunu’s freedom of speech trial jail sentence from six to three months:

In light of his ailing health and the absence of claims that his actions put the country’s security in jeopardy.

I did phone Vanunu after I read that report.

Vanunu told me they were referring to his mental health.

Regarding Vanunu’s September 2015 interview with Israel Channel 2 [which was approved by the Israeli censors] Vanunu appealed directly to the Israeli public stating:

I GOT MARRIED THREE MONTHS AGO. I CAN’T GET A JOB HERE, SO SHE IS THE BREADWINNER.

I WANT TO LIVE MY LIFE, START MY LIFE ANEW. I’M FINISHED WITH THIS ENTIRE [NUCLEAR] STORY, AND I’VE SAID THIS HUNDREDS OF TIMES.

I HAVE NO MORE SECRETS TO TELL, AND I WANT THEM TO LET ME LEAVE AND GO LIVE ABROAD WITH MY WIFE, AND THAT’S THE END OF THE STORY.

The Stories Vanunu told this American about his childhood, crisis of faith, crisis of identity and my research regarding USA collusion in Israel’s Nuclear Deceptions are enshrined HERE

Israel’s Court [and Vanunu’s Defense team] need to know that when I last saw Vanunu in November 2013, he told me a reporter from CNN had recently asked him for an interview but Vanunu told him:

“No, everything is already on the Internet.”

My first two questions to Vanunu: