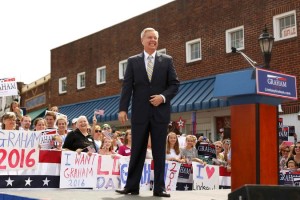 Announcing that he is running for president of the United States, the 3 term republican Senator from South Carolina, Lindsey Graham, addressed the gathered supporters in his home town of Central, South Carolina that he wants to be “the next American Commander in Chief”. Graham stressed in his speech before the cheering crowd that as a commander-in-Chie
f he will fight “ Radical Islam” because terrorists seeks to “ destroy America and our way of life” he also added that as president he would support building regional Arab force to fight Islamic radicals in the Middle East.

Building on his strong military credentials through his 33 years of service in the Air Force as key to understand how to protect Americans at home and protecting America’s interests abroad.
Although Graham did not say how as a president of the United States would confront terror groups that threaten the United States interests in the Middle East, he alluded, however that he wants to empower the regional powers such as Jordan and other US allies in the Gulf to fight the terrorist menace as most notably embodied by “the Islamic State in Iraq and Levant” or ISIL
On his web site “Security through strength” Graham said that “You want to know how this war with Radical Islamic Extremists ends? We win, and they lose. I lay down every night and wake up every morning determined to protect this country. We must fight them over there to keep them from coming here.”
Arab and Muslim Americans in the upstate South Carolina voiced their support for Graham especially his vow to confront terrorism in the Middle East, even though they disagree associating the name of their religion with extremist terrorists. Graham also expressed his strong support for Israel as America’s ally and his support for Israel as a ” Jewish State.”

Nidal Mefleh president of the Muslim American Community in Clemson agrees with Graham that terrorism is a threat to the US national security and that there should be more strenuous strategic policy to confront it. Like Graham, Mefleh is a 22 year Air Force veteran, stressed the need for strong national security and better military strategy to protect American interests abroad. “We support Senator Graham’s efforts to make America more secure and terrorists, no matter what religion they have, must be defeated.”

Mefleh argued, however, that terrorism is not intrinsic to Islam or any other religion for that matter, but erupts and thrives in failed and undemocratic states of Middle East. He also added that Arab states are oppressive against their own citizens and their failure to reform their political and economic systems to make it more democratic and accountable contributed to the spread of terrorism.

The terrorist group ISIL has drove off the ragtag Iraqi army from almost a third of the Iraq since they took over of Iraq’s second largest city of Mosul last June. ISIL has also controlled large swaths of Syria amid an all out proxy civil war that also ushered a terrorist invasion of the country in an effort to oust the Syrian dictator Bashaar al Asad.
Graham is entering a crowded field of republican presidential hopefuls to replace president Obama whom many republicans accuse of being weak and hesitant, when it comes to confront regional threats in the Middle East or the Russian military intervention in Ukraine.

Marlene Saad an Arab American long time upstate republican also supported Graham’s security approach and his foreign policy credentials. For Saad, Graham’s service in the military and his foreign policy experience especially in the Middle East mean that he is more qualified than the rest of the republican candidates who have announced their candidacy. “I know Lindsey and I have worked for his campaigns for over 30 years, and he would be the best candidate to protect our country.” she said. Saad also said that Graham frequented the Middle East and has a good network which can be translated into a better understanding of foreign policy complications” She added.

Saad who is a Maronite Catholic said, however, that she is a Romney supporter should he decides to run, but without him in the race, she is a decidedly on the side of Graham.
Upstate South Carolina has several thousand strong Christian and Muslim Arab community and non-Arab Muslims the majority of which are working professionals such as engineers, doctors, professors and business owners. Some of the Arab Americans in the upstate have roots that stretches back over a hundred years in the state and many have a strong southern identity besides their Arabic one.

Ali Younes is the Editor of the Arab Daily News. He can be reached at: aliyounes@thearabdailynews.com and on twitter @clearaliyounes