On Monday at Arlington National Cemetery Congressional Representatives will again be MIA at the annual honoring of the USS LIBERTY;

However growing numbers of supporters will be there in body or spirit for the 48th year the survivors remember that day in infamy when Israel attacked their lightly armed spy ship as she navigated in international waters. 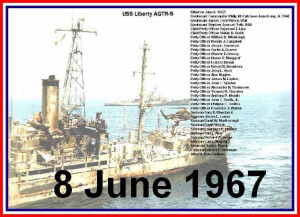 
Lyndon B. Johnson ordered the recall of a flight of fighters dispatched to aid the Liberty and after that a massive cover-up began.

The ship’s commander Captain William McGonagle, who received the Medal of Honor for his bravery, was given the award in a closed to the public ceremony at the Washington Navy Yard rather than the usual venue at the White House with media present.

Crewmen were sworn to silence and a fake narrative of how the attack was due to the ‘fog of war’ was promoted by Israel’s friends.

But we will not forget the Liberty.

On May 18 this reporter hand delivered this letter to Congress from Ernest Gallo, President of the USS LIBERTY Veterans Association to the Orlando offices of Senators Rubio and Nelson. I also dropped one off at a local District 10 office for Representative Daniel Webster.

I followed up with phone calls to their D.C. offices and sent the following email to their Media representatives— twice:

I am seeking a response regarding this Letter to Congress from President USS LIBERTY Veterans Association, with a YES or NO reply:

Does the Senator support the establishment of every June 8 to be known as USS LIBERTY Remembrance Day?

On Saturday, May 30th this email from Senator Rubio’s office arrived [BOLD mine]:

SUBJECT: Responding to your message

Thank you for writing to me to express your concerns regarding care for our nation’s veterans. I understand this is an important issue and I appreciate hearing your thoughts.

In recent memory the Veterans Affairs agency has been fraught with scandal over waitlist times and lack of appropriate care for our veterans. I helped author S.2450, the Veterans’ Access to Care through Choice, Accountability, and Transparency Act of 2014 and introduced the legislation along with Senators Bernie Sanders (D-VT) and John McCain (R-AZ). I am proud to say that this legislation became law and our veterans will receive the care that they were promised and deserve. Additionally, I am pleased that real accountability measures are included in the legislation.

Our nation should always strive to support our veterans who have sacrificed so much. I appreciate their sacrifices and will work to ensure our former servicemen and women are treated with dignity and respect. As we move forward, I will continue to be a strong advocate for veterans and work with my colleagues in the Senate to develop and pass meaningful legislation to improve our veterans’ care and quality of life.

It is an honor and a privilege to serve as your United States Senator. I appreciate you offering your opinion on this important issue.  If I can ever be of assistance to you, please do not hesitate to contact me.
Sincerely,

…We remember through ceremony and by celebrating the freedom they fought to defend. We must never forget what they did in our name…it’s our duty to remember they have volunteered to be in harm’s way to protect us and the ideas and values we hold dear. They deserve our unending gratitude and support.

Every day, I dedicate myself to ensuring that we continue to live in a country that’s worthy of their great sacrifices. Our fighting men and women deserve strong support from their leaders…May God bless them, may we never forget, and may God bless America.

May God Bless America indeed with more than a few thoughtful committed patriots who stand up for LIBERTY and against Government cover-ups and hypocrisy in high places.

Congress HAS NOT INVESTIGATED the USS Liberty incident.

In 2003, an independent commission of experts convened including Admiral Thomas H. Moorer, USN, Ret. Former Chairman Joint Chiefs of Staff, General of Marines Raymond G. Davis, Rear Admiral Merlin Starling and Ambassador James Adkins. They concluded there was compelling evidence that Israel’s attack was deliberate and “Israel committed acts of murder against American servicemen and an act of war against the United States.”

The second for every appropriate committee of the Congress of the United States to investigate the actions of the White House and Defense Department that prevented the rescue of the USS LIBERTY including the NSA, CIA and military intelligence.

The third called for the establishment of every June 8 to be of known as USS LIBERTY REMEMBRANCE DAY.

Do you support the establishment of every June 8 to be known as USS LIBERTY REMEMBRANCE DAY? 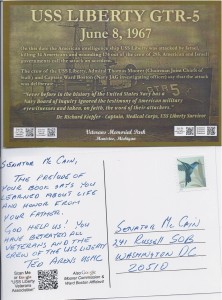 My interview with Dr. Kiepfer

Honoring the crew of the USS Liberty

U.S. defense aid to Israel is likely to increase when the current package worth $3 billion a year expires in 2017. A U.S. official said negotiators were close to a new deal that would bring annual payouts to $3.6 billion to $3.7 billion on average. An Israeli official, who also declined to be named, put the expected aid at between $3.5 billion and $4 billion. 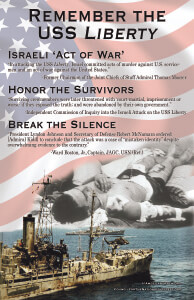