Ned Rosch, a certified yoga teacher and graduate of The Center for Mind-Body Medicine’s “Healing the Wounds of War,” program said he “was raised in a traditional Zionist Jewish home and torn apart by an internal conflict between my increasingly progressive politics and my Zionist upbringing.  Ultimately, I realized I needed to stand for justice everywhere – especially to stand, as a Jew, in solidarity with the Palestine struggle for justice. For a brief but remarkable nine days in November, I had the privilege of being part of a Washington State Physicians for Social Responsibility health delegation in Gaza.”

For over fifty years Physicians for Social Responsibility has endeavored to create a healthy, just and peaceful world for present and future generations all over the world.

In 1991, Dr. James Samuel Gordon a Harvard educated psychiatrist and world-renowned expert in mind-body medicine to heal depression, anxiety, and psychological trauma became the Founder and Director of The Center for Mind-Body Medicine. In 2002, their “Healing the Wounds of War” Professional Training Program began working in Gaza.

The Center for Mind-Body Medicine’s model unites modern science with the ancient wisdom teaching of the world’s healing traditions and is dedicated to reviving the spirit and transforming the practice of medicine.

At the forefront is Ned Rosch, who also exemplifies Karma Yoga- the yoga of altruistic service.

Rosch said:
To be there so soon after last summer’s brutally devastating war on the people of Gaza was to catch a glimpse –through the stories we heard and the destruction we saw – of the grotesque horror of those 51 days.

The demolition was everywhere; the grief universal; the trauma intense.

On the way into Gaza City, we saw haunting skeletons of homes, people living in bombed out buildings, and mosques, hospitals and factories reduced to rubble.

Etched in my mind probably forever will be what we saw in Beit Hanoun, Shejaiya and Kuza’a, cities that were some of Gaza’s most heavily bombed targets.

People are living in structures of cardboard and blankets surrounded by rubble next to what used to be their homes.  Even though I’d seen these images online, somehow the impact of witnessing families squatting next to what was everything they had owned took my breath away, as did a busted up large slab of concrete with names spray painted on it of family members buried under the mounds of debris, a woman sitting on the rubble staring vacantly off in the distance, and a wedding party celebrating amidst broken buildings.

An incredibly vivacious woman named Reem told me she just can’t think any more about the future.  “All I have”, she said, “is today and that’s OK as it’s filled with opportunities to help people.”

Reem is opening centers in some of Gaza’s most destroyed areas – centers where children play, read, sing, learn French, plant seeds in paper cups – to maybe get a taste of what a “normal” childhood might be like.

Very little is normal here as after 8 years of siege and 3 wars in the past 6 years have devastated the economy, wrecked the environment, and ripped apart people’s hopes that things will someday get better, that there is a future.

And yet, through all the trauma, there is also resistance and resilience.  People intuitively understood that literally over-the-top stress levels in Gaza were strangling them and their traumatized loved ones.

An end to the siege, freedom and justice would go an incredibly long way towards alleviating the stress, but at least until then, people are hungry for ways to reduce CTSD (continuous traumatic stress disorder).

The UN Office for the Coordination of Humanitarian Affairs has determined that every child in Gaza requires psychosocial support and at least 373,000 of these children need specialized care.

Our program is truly unique in that we work with both sides — Palestinians and Israelis — and with people on each side who have widely and passionately different ideas about religion and politics. We offer them a scientifically validated and culturally acceptable way to help them recover from their stress and trauma and to sustain them psychologically as they work toward peace with one another.

As Israelis and Palestinians search for ways to work collaboratively — to end the destruction and to heal the psychological trauma that has devastated their communities — the Healing the Wounds of War program is designed to play an important role in reconciliation and healing, helping to bring the cycle of victimization and revenge to an end.

I was struck by the eagerness of so many people to learn about meditation, relaxation techniques, visualization and yoga to reduce stress.  So, in close collaboration with the Gaza Community Mental Health Program (GCMHP – our delegation’s host agency) and the Center for Mind-Body Medicine’s Gaza Project (MBM), I was privileged to facilitate a series of experiential stress reduction workshops.

In the first workshop I did with an inspiring and hugely overworked group of school counselors, I suggested at one point that they visualize a beautiful place that they could share with their families and others they love.

When I asked what that place looked and felt like, the most common response was that it was hard to push out of the way the horrors of the summer.  The second most common was that the place was safe.

From then on I always described the visualized place as not only beautiful but extremely safe and calm, two qualities virtually impossible to come by in Gaza.
The yoga portion of my workshops generally included a divider down the middle of the room separating women from men.  I was generally at the head of the divider so that everyone could see me but the men couldn’t see the women, as traditionally men shouldn’t watch women doing things like, well, yoga!  I kept my eyes on the men so even though the women could see me, I “couldn’t” see them.

The following comments after the final relaxation pose reflect the kinds of feedback I heard after every workshop:

“In the 2008-2009 war, I lost my son. A teacher from France taught me some yoga which helped me heal and which I did every day until this summer’s war when I just couldn’t do anything. This experience reminded me I need to continue my healing.”

“Ever since this summer’s war, I’ve had a weight on my chest.  I released a part of it today.”

In November 2006, Father Manuel, the parish priest at the Latin Church and school in Gaza warned the world:

“Gaza cannot sleep! The people are suffering unbelievably. They are hungry, thirsty, have no electricity or clean water. They are suffering constant bombardments and sonic booms from low flying aircraft. They need food: bread and water. Children and babies are hungry…people have no money to buy food. The price of food has doubled and tripled due to the situation. We cannot drink water from the ground here as it is salty and not hygienic. People must buy water to drink. They have no income, no opportunities to get food and water from outside and no opportunities to secure money inside of Gaza. They have no hope.

“Without electricity children are afraid. No light at night. No oil or candles…Thirsty children are crying, afraid and desperate…Many children have been violently thrown from their beds at night from the sonic booms. Many arms and legs have been broken. These planes fly low over Gaza and then reach the speed of sound. This shakes the ground and creates shock waves like an earthquake that causes people to be thrown from their bed. I, myself weigh 120 kilos and was almost thrown from my bed due to the shock wave produced by a low flying jet that made a sonic boom.

“Gaza cannot sleep…the cries of hungry children, the sullen faces of broken men and women who are just sitting in their hungry emptiness with no light, no hope, no love. These actions are War Crimes!”

The practice of yoga can be exceptionally cathartic as its effects are experienced not just in the physical realm, but in the emotional sphere as well.
In a growing body of research, yoga has demonstrated remarkable effectiveness in assisting people to reduce overwhelmingly high stress levels, especially those dealing with posttraumatic stress disorder.

In the most recent edition of the Journal of Clinical Psychiatry, researchers under the leadership of Bessel van der Kolk, MD published “Yoga as an Adjunctive Treatment for Posttraumatic Stress Disorder”, a study exploring the efficacy of yoga to decrease PTSD symptomatology.

The primary outcome measure was that yoga significantly reduced PTSD with effect sizes comparable to well-researched psychotherapeutic and psychopharmacologic approaches.

The study went on to say that yoga may improve the functioning of traumatized individuals by helping them to tolerate physical and sensory experiences associated with fear and helplessness and to increase emotional awareness and affect tolerance.

While going through yoga teacher training, I always knew that I wanted to somehow connect my commitment to activism – especially the struggle for justice in Palestine – with my passion for yoga.

Little did I know at the time that utilizing yoga to explore stress reduction would swing open a door to Gaza and inform a meaningful way to connect with its amazing people who shared compelling parts of their lives with me.

A marvelous facilitator, who does support groups for children, invited me to a group she runs for 5 year olds who lost their home – and more – in the bombing.  I sat in the circle with the children as they chose happy or sad faces to represent how they felt.

One girl said she took a sad face because a bomb killed her grandfather.  Others took sad faces because they had bad dreams.  The facilitator told me that her own 10-year old daughter pleaded with her during the war, “Don’t leave me alone. I want to die together.”

I’m struggling with many things now, not the least of which is finding words to express the intensity of the experience of getting to know, in some small but intensely meaningful way, a number of unforgettable and beautiful people in Gaza and catching a glimpse into the harsh reality of their lives…

Ned Rosch plans to return to Gaza in March. Pictured with his wife Maxine who made her third service trip with Physicians for Social Responsibility during Ned’s first in November 2014. Rosch teaches Yoga at Gaealana Healing Arts and Multnomah County in Portland, Oregon. 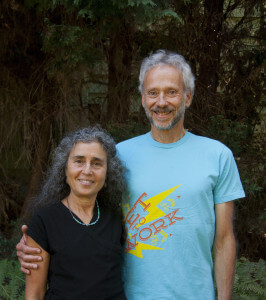 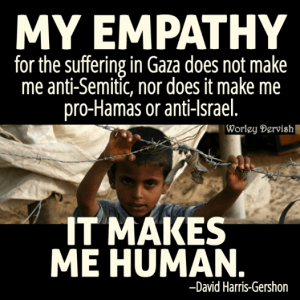