Israeli dissident and prolific writer, Roi Tov was born in South America and grew up as Reuven Schossen, in a tight-knit communist kibbutz along the Jordan Valley.

After four years of service in the Israeli Defense Force, Captain Schossen became a reservist and graduated with four degrees; three in chemical physics. 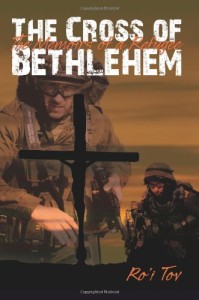 In Tov’s second book, The Cross of Bethlehem II: Back in Bethlehem he writes:

The year was 1983, but at school we were already studying Orwell’s 1984 a book which frightened us by its similarity to life in Israel.

The Lebanon War, which had begun a year earlier, was still called ‘the War for the Peace of Galilee’ by the government.

The Hebrew possessive contraction brought together the two words which sounded exactly like ‘War-Peace,’ creating a perfect Orwellian oxymoron.

We all skipped the obvious contemporaneous context of the book in our commentaries; such semantics could belong only to the enemy and we lived in an enlightened society.

Our government could not have made such an Orwellian choice consciously. And yet a little voice in my head told a different story, one that must be kept to myself. The glitch allowing such a subversive book to be on our reading list could only be interpreted as some inconsistency of the system.

However, a frightening alternative explanation was that “1984” had been placed on the Education Ministry’s official list of books intentionally, so that we would forever fear authority and behave. It was our first lesson in government manipulation of its people. 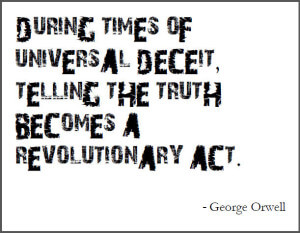 When I reread it a few years ago, I was struck at how much Mordechai Vanunu’s life mirrored Winston Smith’s;  an individual with an open and free mind, independent thought, memory of history, a voice of dissent, willing to take bold action and because of it suffering unimaginable torture inflicted by the State/Big Brother.

On January 4, 2014 and after a year of silence Israel’s Nuclear Whistleblower posted this quote at his YouTube Channel Discussion Wall:

11 year after Mordechai Vanunu was released from prison but placed in an administrative cell made of limitation orders barring him from communications with non-Israelis, the State has notified the High Court he will be allowed to “conduct an oral incidental conversation with foreigners, as long as such conversation is a one-time matter, conducted face-to-face in a public space open to the broad public, not planned in advance, and not lasting more than 30 minutes”. Here is the appropriate tag for this post: George Orwell

In 1987, from Ashkelon Prison, Vanunu wrote:

I had no choice. I’m a little man, a citizen, one of the people, but I’ll do what I have to. I’ve heard the voice of my conscience and there’s nowhere to hide…yes, it’s there all right. I’m all right. I do see the monster. I’m part of the system. I signed this form. Only now I am reading the rest of it. This bolt is part of a bomb. This bolt is me…

I am the clerk, the technician, the mechanic, the driver.
They said, Do this, do that, don’t look left or right,
don’t read the text. Don’t look at the whole machine. You
are only responsible for this one bolt. For this one rubber-stamp.
This is your only concern…

I have no choice. I’m a little man, a citizen, one of the people,
but I’ll do what I have to. I’ve heard the voice of my conscience
and there’s nowhere to hide.
The world is small, small for Big Brother.
I’m on your mission. I’m doing my duty. Take it from me.

Come and see for yourselves. Lighten my burden. Stop the train.
Get off the train. The next stop — nuclear disaster. The next book,
the next machine. No. There is no such thing.

The atomic bombs dropped on Hiroshima and Nagasaki cannot compare to the 21st century slaughter that could be achieved by thermonuclear weapons with capacities to wipe out 100% of a country within minutes. The Industrial Military Complex cranks out new weapons about every five years and soon the minds driven mad with doublethink-“war is peace”- will create 100 or 1,000 megaton bombs!

Orwell demonstrates the illusion of the assumption that democracy can continue to exist in a world preparing for nuclear war…leaders…have only one aim, and that is power…and power means to inflict unlimited pain and suffering to another human being…

Can a minority of one be right?

We spend a considerable part of our income and energy in building thermonuclear weapons, and close our minds to the fact that they might go off and destroy one third or one half of our population and that of the enemy…another example of doublethink-from a Christian standpoint” is the evil of killing any other. – Erich Fromm, Afterword, Centennial Edition 1984

“Orwell in 1948 understood that despite the Axis defeat, the will to fascism had not gone away…the irresistible human addiction to power were already long in place…the means of surveillance in Winston Smith’s era are primitive next to the wonders of computer technology…most notably the Internet.” – Thomas Pynchon, Foreword, Centennial Edition 1984

In an April 2012 email conversation with Tov he wrote:

“In The Cross of Bethlehem II there is one chapter dedicated to  Mordechai Vanunu, a true hero of our era. I expand there on the  reasons for his and our persecution.

“On three other central chapters in  the book I expand on what he has described as ‘psychological torture,’  but I prefer to call ‘psychological warfare.'”

My last email exchange with Tov was in June 2014, prompted by Tov’s article: Peres and Pollard Embarrass Obama

I emailed Tov to ask how he was and alert him to my most recent comments regarding Peres written for The Arab Daily News:

The Maddening of Mordechai Vanunu Israel’s Whistleblower: A Man who knew too Much

My situation is approaching its end. In August, my foreign ATM card expires. I will not be able to withdraw funds or to perform Internet transactions.

Denied my documents by the Bolivian government, which stole them, it is impossible to receive a new one by mail.

A few days after that, I will be forced to leave the cheap guesthouse which had become my prison and be on the streets.

This is a police state. They check documents at the access point to the cities. I cannot leave La Paz.

There are a lot of things you can do now. Keep caring of yours; keep the world aware of Vanunu. Keep doing good.

If you asked particularly regarding me, then there is nothing to do. Israel wants me dead and hired the violent, freakish, Mickey Mouse society that offered me refuge in bad faith.

It is time for the long nap. Meanwhile, I will publish as much as I can for as long as I can…

As of this writing, Tov has not replied to my recent emails, and although he had published on a daily basis for over two years he has NOT published anything since his concluding comment posted on August 27, 2014:

If nothing changes, I will die assassinated on the Bolivian streets within a fortnight.

The word “assassin” is derived from “hashish;” a historic group of murderers consumed the drug. Probably there is no better choice of words to describe the druglord running the corrupt country killing me softly by orders of the State of Israel.

Years ago I promised never to give up, to write as much as I can for as long as I can. Contrary to Netanyahu and his killers, I am a man of word and honor. Not surrendering against a force larger than me by many orders of magnitude, I lose my life but gain my soul.

May God show His mercy upon all victims, who relentlessly shout: “Pharaoh, Let my People go.”

Vanunu should know that on Jan. 3 and 4, I posted the following comments to Michael Sfard [Vanunu’s attorney] at his Facebook Wall in response to Israel now “allowing” Vanunu to “conduct an oral incidental conversation with foreigners, as long as such conversation is a one-time matter, conducted face-to-face in a public space open to the broad public, not planned in advance, and not lasting more than 30 minutes”

This American writer became a reporter in 2005 after and because Vanunu told me:

I contend that today’s Big Brother is an Industrial Media Congressional Military Security/Surveillance Complex, which as of this writing have not yet found the way to stop the free flow of info and independent thought streaming through the World Wide Web.

Can a minority of one be right…