Being a Palestinian in America and Chicago 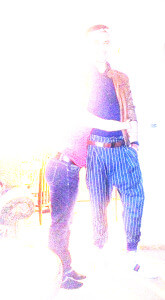 Being a Palestinian in America and Chicago

Being a Palestinian in America and Chicago is like being an alien from Mars visiting Venus. She/he know Venusian, and commands very good language skills. Nevertheless, it is being an alienated alien for some reason, even amongst its fellow Marsian immigrants. With a tattoo of Palestine in America and Chicago, he is being confused as a Said fan, but he never played basketball, even though he is 6’5’’ of height, and probably few inches less of courage.

To alternate his past, he went to a local supermarket to buy toilet paper. He was looking for his favorite brand while wearing his warm and comfy clothes. All toilet papers were out of color. He liked colorful papers. Yellow: was weirdly his favorite for papers. Thus: an alien again; in the Supermarket. And then, confusion was never decoded.

A cat once told her: “Smile!” Mr. Rabbit with his fancy hole was in rage. She smiled then stopped to sneeze. “Smoke some Hookah!” Mr. Caterpillar said. “What is that watery pipe?” thought Alice. “It is Shisha!” Mr. Caterpillar shouted. They all started giggling when Mrs. Chihuahua jumped in a bag from Paris.

City dynamics and structures have a different meaning in Palestine. After all, it is where Jesus Christ was born? Streets don’t follow a grid system; he never drove a car from Paris. Parisian cars tend to flat out after a while just Roman shoes. Palestinian cities do not get offended because they have flatten out for few years now.