Common Defense is a diverse, grassroots organization of U.S. veterans and military family members who are fighting to preserve the core values they swore to uphold and defend.

On Wednesday an email from veterans of recent American wars and the Common Defense Team informed this reporter:

On Twitter today, we told Donald Trump that the only way to honor Heather Heyer and the victims of Charlottesville is to unconditionally condemn white supremacy and neo-Nazism.

Instead of listening to our team of more than 100,000 veterans, military families, and allies, he blocked us.

If Trump thinks he can silence us, he’s got another thing coming. There are millions of Americans who reject the politics of hate, and we’re not going anywhere.

See the tweets that got us blocked by Trump below: 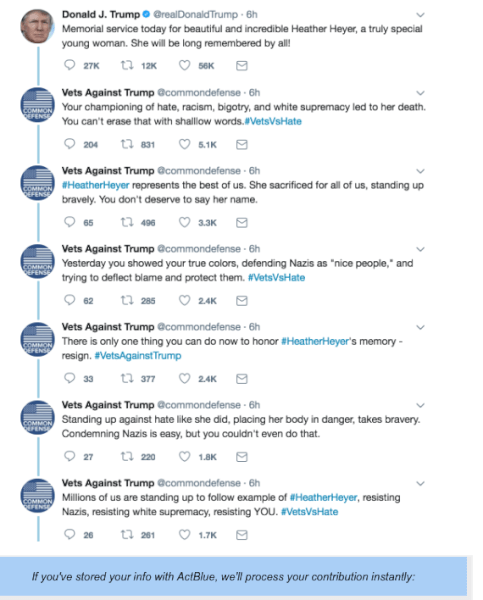 This is apparently what sent Trump over the edge. We told him to condemn the Nazis that murdered Heather Heyer in cold blood, which should be an easy task for the world’s most powerful person.

After all, our grandparents didn’t hesitate to put their lives on the line to fight Nazis in World War II, but Donald Trump can’t even muster up the courage to send a tweet!

Don’t get me wrong: we’ll wear this block like a badge of honor.

It’s just another piece of proof that the work we’re doing in opposing Trump is getting under his skin. And we won’t rest until Trump’s crusade of bigotry, fearmongering, and hate is stopped.

We demand justice for Heather, and all those who were injured as they peacefully protested against white supremacists and neo-Nazis.

We demand justice for the immigrant communities that Trump terrorizes, and the Muslim allies that Trump scapegoats. And with you by our side, we won’t rest until we win. –In solidarity, Pam, Perry, Alex, and the Common Defense Team 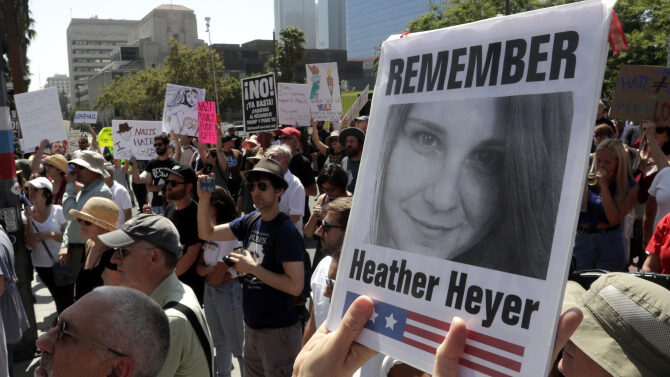 “Here’s the message…They tried to kill my child to SHUT HER UP! Well, guess what—YOU just magnified her”-

America was founded by a diverse group of IMMIGRANTS, visionaries, rebels, agitators, dissidents, fathers, mothers, sisters and brothers who UNITED to essentially tell the King of England to back off of this land and leave US alone.

The most revolutionary minded of all of America’s founding fathers was Thomas Paine, who articulated a flaming hope birthed in a vision of a new world driven by the spirit of independence from a British occupation.

Tom Paine’s self published forty page pamphlet, “Common Sense” united a disparate and disconnected group of settlers to become compatriots, to rise up in rebellion and then form a nation that thrives on dissent—BUT not violence!