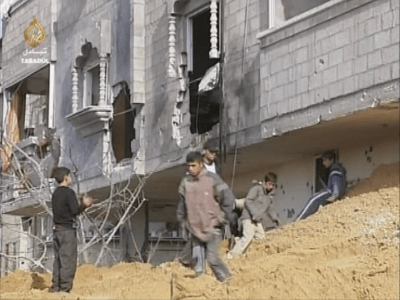 HOLOCAUST SURVIVOR’S DESCENDANTS massacred by Israel in Gaza: In a not so uncommon twist, a Holocaust survivor returned his Holocaust Award to the “State of Israel” this week after announcing that the family of one of his descendants, a nephew, were among the 2,000 civilians massacred by Israel’s war crimes assault against the Gaza Strip. Hank Zanoli, a non-Jewish survivor of the Holocaust whose relatives were murdered by the Nazis during World War II at a Nazi concentration camp, returned a medal he received for his suffering and for saving a Jewish boy who was the only remaining survivor of his family in Germany. Zanoli’s grand nephew married a woman who is Palestinian, and her family was massacred 71 years later on June 20. Mr. Zanoli’s grandniece, a Dutch diplomat, is married to a Palestinian economist, Ismail Ziadah, according to the pro-Israel newspaper the New York Times which softened the story to minimize the irony of the horrific massacre of six civilians.

NEW YORK’S RACIST Governor Mario Cuomo joined a delegation of Jewish elected officials from New York to show solidarity to Israel and to support the massacre of babies, children, teenagers, women and old people in the Gaza Strip, as long as they are not Israeli or Jewish victims. But Cuomo, whose history of racist comments against Muslims and Arabs and his abandonment of Christians living under Israeli oppression is notorious, declined to visit the West Bank or meet with Palestinian leaders because such a trip wouldn’t get him campaign contributions or votes. The Arab community already does not vote for Cuomo because of how he has changed the governor’s office into a center for Racist practices. Click to read the story.

WEST WING EPISODE rings true today 10 years later on hypocrisy of defenders of Israel. This is hilarious, the opening of the 6th Season of West Wing 2004 had a great episode where the president, Played by Martin Sheen, finds a map of the Middle East published in 1709 and he things it’s cool and he wants to display it. But all his aides say, not, don’t display it because it doesn’t show Israel. https://www.youtube.com/watch?v=1k9IlR3-_-A … here’s the background on the episode …http://en.wikipedia.org/wiki/The_West_Wing_(season_6) … we’ll be talking with the Mayor of Lincolnwood at 4:15 pm today on Talk of the Town Radio WCEV 1450 AM and on www.YahalaVoice.com about the battle to prevent the display of the Palestinian Flag there …

MORE ON THE STEVEN SALAITA persecution by the University of Illinois Urbana-Champaign and the mainstream news media. The Chicago Tribune has, once again, allowed an idiot to publish commentary that is so factually incorrect and biased that you have to wonder about the ethics of the newspaper itself. At issue is whether or not Steven Salaita has a right to publicly criticize Israel. The Chicago Tribune, which normally stands in defense of free speech, has reversed itself because of pro-Israel bias and anti-Arab discrimination, a policy at the Chicago Tribune where Arab journalists have been routinely harassed and warned not to write about their “pro-Arab” viewpoints. The Chicago Sun-Times is worse, of course, but the Chicago Sun-Times doesn’t pretend to be ethical at all and are open in their hatred of Arabs and Muslims, whereas the Tribune does.

Of course, the Chicago Tribune is a voice box for the University of Illinois Urbana-Champaign so maybe they are just fabricating arguments in defense of the indefensible. The Chicago Tribune has been tapping pro-Israel apologists on their staff to defend UIUC against charges that they violated Steven Salaita’s rights when they fired him for expressing his views about a foreign country (yes a FOREIGN COUNTRY) in his Twitter posts (Tweets.) The first is from pro-Israel writer Jodi S. Cohen (click here). Then, the Tribune published an Op-Ed piece by pro-Israel writer Steven Lubet whose biases jump out immediately in his one-sided attack against Salaita and defense of the UIUC’s pro-Israel decision, of course. (Click here to read the lying column.) Lubet writes ludicrously that Salaita’s tweets have been “venomously” anti-Israel, a term that not everyone agrees with or could easily be applied to his own writing. He argues the criticism has been “benign,” suggesting that Salaita has been even worse. That plays into the lie that somehow in criticizing Israeli war crimes against civilians in the Gaza Strip, he has advocated violence against Israel, a bald-faced lie. Lubet admits he “loathes” Salaita’s views. His arguments exaggerate the issues, twists the fault and makes claims that Salaita has attacked “Jews,” making him anti-Semitic, a fallback position defenders of Israel have used against critics to deflect away from the war crimes.

Typical of the Chicago tribune’s racist anti-Arab and anti-Muslim practices, the newspaper HAS NOT allowed anyone to defend Salaita. Instead, they immediately published the slanted anti-Salaita story by Cohen (a biased writer) and then followed up with a twisted anti-Arab Op-Ed by Lubet, also a biased writer with an anti-Arab agenda.

The News-Gazette which has done a comprehensive job of covering the scandal posted the two letters and support documents released by UIUC on Salaita’s firings. Click here to view the documents.

BOYCOTTING THE CHICAGO TRIBUNE is an option American Arabs and Muslims should consider. If they don’t stand together and make a statement against the bias of the Chicago Tribune, then they might as well stop complaining about Israel’s war crimes in the Gaza Strip. Don’t buy the Chicago Tribune. Arab and Muslims can make a huge difference and a boycott can impact the Tribune’s finances notice ably. There have been a few reporters or Arab or Muslim background working at the Tribune but they have all been bullied (they won’t admit it) but the proof is in the pudding. Jewish reporters at the Tribune are frequently encouraged to write about their heritage and life experiences as Jews and Israelis. In contrast, none of the Arabs or (Arab) Muslims are permitted to write about their heritages ESPECIALLY if it involves Israel and the natural criticism that will be included because of Israel’s racist and discriminatory policies against non-Jews, Christians and Muslims.

DEARBORN AND DETROIT Arab residents have been slammed with a double whammy recently. First, the news that the Federal Government believes Metro-Detroit has the largest concentration of terrorists, and then the massive floods that destroyed so many homes and properties. The damage was extensive. To keep up with what’s happening in Dearborn and Detroit visit and Like the Facebook Page called Dearborn Area Community Members.

THIS WEEKEND IS the Chicago Watani Arab Festival at Toyota Park Feb. 22-24. The festival features entertainment, food, arts and crafts, a carnival and more than 30 vendors and displays. 71st and Harlem Avenue. The Arabesque Festival was held in Chicago for a few years until newly elected Mayor Rahm Emanuel refused to continue to support it and the organizing committee felt it could not raise the money it needed to continue it. Emanuel also closed the Arab Advisory Commission, which had been poorly organized and which did so little anyway under the former Human Relations Chairman Clarence Wood (who finally retired — good riddance). It never lived up to its promise anyway, but that’s not the point. … Mayor Emanuel continues his anti-Arab policies by refusing to invite leaders of the American Arab community to meet to discuss the city’s failed policies and lack of services to American Arabs and (Arab) Muslims. Emanuel does invite Muslims who are not Arab to participate in his activities. And there are “some” American Arabs who still work for the City of Chicago but their fate is uncertain. … Tariq Abu Khdeir, the cousin of Mohammed Abu Khdeir who was viciously murdered by Israeli extremists, speaks at an event in Houston about being the victim of racial discrimination in Israel, attacked and beaten by racist Israeli police while his cousin was murdered.

The Tabboun: News on American Arabs and the Middle East Tabboun