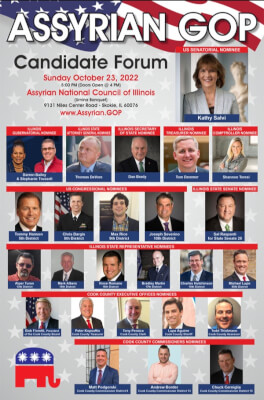 In Illinois, where dead people vote, you have no excuse not to vote. – Lt. Col Sargis Sangari (Ret)

We also discussed the status of IL SB2900, which was introduced on 18 MAY 21 by Senator Bailey, in designating 7 August of each year as The Assyrian Martyrs Day.

I also ask Senator Bailey to explain how a Republican governor can have the power to clean up corruption in Illinois when the Democratic machine controls nearly every facet of life in Chicago with policies buried in the corrupt Democracy bureaucracy for half a century.

Senator Bailey also addressed my question about why Illinois is having problems managing the crime issue, especially in Chicago. His short answer was that the two sides of the aisle are not talking.
Senator Bailey also expanded on what his administration would do on his first day in office. He addressed the pension issues, and I highlighted that most of those issues are tied to Wall St. Pension Investment companies who choose investments based on benefits for companies in China that the CCP leads.

Join me for this first part of a two-part interview with Senator Bailey. 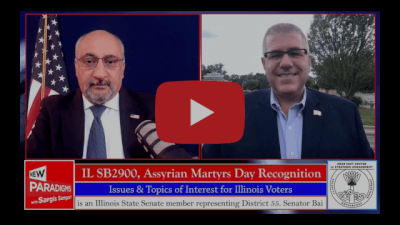 Assyrian GOP
We, the Assyrian community of the United States, fully realizing our responsibility to our community, to our State, to our Country, and associate ourselves for the following purposes:To uphold, honor and defend the constitution of the United States of America; to preserve the goals of freedom and justice for all and abide by the rules governing our country; to create an atmosphere among Assyrians to preserve our national interest through Republican Party.  In addition, we will dedicate ourselves to the purpose of assisting Republican candidates in the election towards which we must all work together with no expectation of reward.

The Assyrian American National Republican Coalition known as has been officially approved and recognized by the Illinois Republican State Central Committee on August 16, 2007.

Assyrian American National Republican Coalition has adopted “Assyrian GOP” as its assumed name and registered it with the Secretary of State of Illinois.

​Founder of the United Assyrian Appeal​

Diplomatic status in Kuwait as Director of Host Nation Affairs

Sangari Planned, Researched and Executed the reception & integration of U.S Military personnel for U.S. Army laying the ground work for operations in Afghanistan.

Analysis and Designs for training affecting all civil affairs.