Radio Show Guests/Topics. Wednesday June 30, 2021 at 8 AM EST. We have a great lineup of guests and topics this morning … This morning’s topic is Lebanon.

We’ve seen turmoil consume Lebanon over the past few years … this week the government lifted fuel subsidies and gasoline prices jumped more than 35 percent … which is a huge and prohibitive increase …. Almost a year ago, Beirut witnessed a massive explosion at its port … one that many believed was somehow tied to Hezbollah 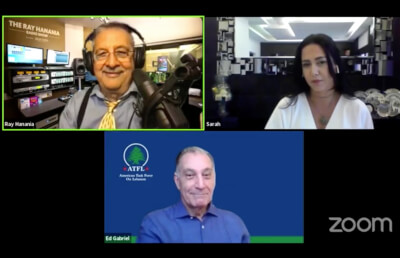 The gross domestic product has dropped more than 20 percent and the Lebanese pound has lost 90 percent of its value against the U.S. Dollar … there’s a banking crisis, too, in a city that was once the world’s jewel …

Ed Gabriel president of the American Task Force on Lebanon and former Ambassador to the Kingdom of Morocco from 1997-2001 and Lebanon analyst and Arab News Gulf regional manager Sarah Sfeir based in Lebanon.

“The Ray Hanania Show is brought to you by Arab News at ArabNews.com on the US Arab Radio Network.

We’re broadcasting live on WNZK AM 690 in Greater Detroit and WDMV AM 700 in Greater Washington DC … and streamed live on Facebook.com/ArabNews and also on ArabRadio.US

Click this link to watch the Video Radio Show Stream from Facebook or use the widget below to listen and watch the show.

Get the podcast at ArabNews.com/RayRadioShow

On this week’s show, Ray Hanania held a discussion with Ed Gabriel, president of the American Task Force on Lebanon and former Ambassador to the Kingdom of Morocco from 1997-2001, and Sarah Sfeir, Lebanon analyst and Arab News Gulf regional manager based in Lebanon, on the turmoil consuming Lebanon over the past few years. They discussed the tough conditions Lebanese citizens must endure and how the people elected to help them have become the problem. Through the American Task Force on Lebanon and Secretary Blinken there has been a push to focus on the corruption occurring in the Lebanese government. The ATFL believes, according to Ed Gabriel, that three immediate actions should be taken.
1.     The U.S. should take leadership with other foreign countries on a common plan to help Lebanon.
2.     Increase humanitarian aid through nonprofit organizations so the money is not lost to the corrupt government.
3.     Support the Lebanese armed forces.
The U.S. has already joined together with France to put pressure on the Lebanese government although nothing is being done on the ground. Hanania, Gabriel and Sfeir agreed that there needs to be an international mobilization to help Lebanon and one of the first steps needs to be a reform in the Lebanese government.
You can hear the show in Detroit on WNZK AM 690 radio (8 AM and 5 PM EST), in Washington DC on WDMV AM 700 Radio (8 AM EST) AND watch it live stream on Facebook.com/ArabNews as well as on the US Arab Radio Network at ArabRadio.us.

Government should crack down on extremism and racist supremacy Activism