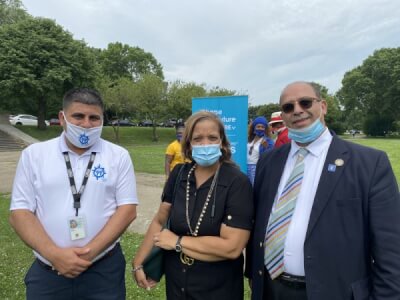 U.S. Census stresses importance of including Arab Americans and Muslims in the 2020 Census count during event at DuSable Museum of African American History on Wednesday. The Census has hired several Arab Americans to assist from Chicago and is receiving support from the influential American Arab Chamber of Commerce

Illinois representatives of the U.S. Census said Wednesday that engaging Arab Americans in the 2020 Census is a priority that will benefit their community as well as reinforce their needs in everyday society.

Ellisa Johnson, the deputy regional census manager for the Chicago Region of the U.S. Census Bureau, spoke directly about the need for Arab Americans and people of the Middle East and North Africa region (MENA) to complete the 2020 Census forms.

Johnson was one of the many officials who participated in a program to rally support for the Census held at the DuSable Museum of African American History in Chicago on East 57th Street.

“We have one of the most diverse cities in the country and it is important for us to make sure the Arab community is included in all that we do in terms of our hiring, in terms of our outreach. We want to make sure we have a diverse workforce, that is why we have the staff we do that speaks up to 21 different languages,” Johnson said noting the Census impacts how much federal funding is allocated to support communities over the next 10 years, which is estimated at more than $675 billion a year across the country.

“That is vitally important to us to make sure we have fair representation that represents every single population here in the State of Illinois and particularly in the City of Chicago. In some areas, we have over 124 different languages and we wanted to make sure we have a work force that looks that way and that can reach those populations when it comes time to knock on doors and encourage people to responds to the census.”

The DuSable Museum event was held in the “Sunken Gardens outdoors, maintaining strict social distancing and the wearing of face masks to protect attendees from COVID-19 infection.

“The census impacts all of us no matter what your race is. We want everyone to feel included in the Census because it is all about everyone. It’s not just about one group,” Johnson added.

“It is vitally important for the MENA Community and all of our diverse communities in the State of Illinois to make sure everyone is counted. It impacts all of us.” 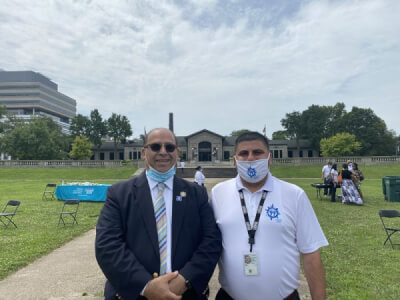 The State has allocated more than $20 million that has been distributed to many ethnic American and racial organizations in Illinois, although many Arab Americans have called for more funds to be allocated directly to the Arab American community.

Wednesday’s program at the DuSable Museum included among the audience several prominent Arab American leaders including Hasan Nijem who is the president of the American Arab Chamber of Commerce, as well as Reema Kamran, executive director of the Islamic Muslim Civic Coalition.

“We are very proud that the U.S. Census has reached out to the Arab American and Muslim community to hire individuals from our community to work on their staff to ensure that we are included and fully represented,” Nijem said.

The American Arab Chamber of Commerce has been very active in recent months defending the rights of Hookah Lounge owners and also a dozen Arab American businesses that were looted and burned down during the post-George Floyd protests in Chicago alone.

“If we are not engaged and involved actively, sometimes we don’t get noticed and we are not given the extensive role that we deserve. Arab Americans are very active in the Chicagoland area as business people, politicians, government officials, activists with many organizations and also veterans and family members,” Nijem added.

“The Census must reach out to us and include us in order to fulfill their mission fully and properly. But we also have to reach out to them and participate and show support so they can see who we are. Sometimes our community focuses too much on politics and the Middle East and not enough about our needs and lives right here in America. There is a balance we need to strike.”

Nijem noted that several Arab Americans have been hired by the Census to fill this void. Among those at the DuSable event was Dr. Amjad T. Assi, a partnership specialist at the U.S. Census Bureau hired to engage Arab and Muslim Americans as well as in higher education in the Chicago Region.

Also attending and speaking was Shamiram William Youkhanna, an Assyrian American member of the U.S. Census bureau. The Assyrian community is an important Arabic-speaking Christian community that originates from the Arab World and which has a large population presence in Chicago.