USS Liberty survivor of the Six Day War Donald Pageler began to write his memoirs for a book; but they have morphed into the documentary screenplay “USS LIBERTY LOVE STORY” based on actual events and real people.

To commemorate the 52nd year after Israel’s attack on the USS Liberty and the American governments cover-up the teleplay documentary USS LIBERTY LOVE STORY went live on this Good Friday at InkTip  “where everyone goes for scripts and writers.” 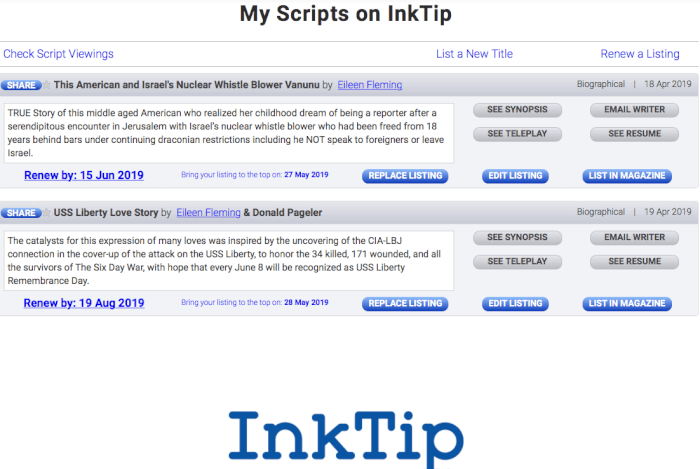 A logline is a 60 word or less statement explaining the script. The longline for USS Liberty Love Story reads:

The catalysts for this expression of many loves was inspired by the uncovering of the CIA-LBJ connection in the cover-up of the attack on the USS Liberty, to honor the 34 killed, 171 wounded, and all the survivors of The Six Day War, with hope that every June 8 will be recognized as USS Liberty Remembrance Day.

I am but one member of a band of American brothers who survived Israel’s June 8 1967 attack on the USS Liberty, American’s then premier surveillance ship. I found a productive way through my anger at the LBJ Administration for instituting the cover-up. My activism has helped me cope with the silence of every presidential Administration and Congress since who have all failed to support the troops who survived Israel’s Six Day War by ignoring our pleas for a transparent and thorough investigation of that day in infamy when America’s Middle East policies aligned more closely with Israel. In 1967 Captain Ward Boston was given one week to conduct an investigation of Israel’s attack on the Liberty. Before he died Captain Boston signed an affidavit stating that the attack on the USS Liberty was deliberate…

On 5 June 1967, Israel attacked the Arab countries in what became known as The Six-Day War. Arab forces were slaughtered by the Israelis, using mostly Soviet supplied equipment. By June 7, the Israelis had slashed their way across the Sinai, opened the Gulf of Aqaba, and captured the Old City of Jerusalem that had been under Jordan’s control. The United States and the United Nations pressured Israel to back off after Jordon agreed to a ceasefire; however the Israelis had plans to invade Syria on June 8 but Liberty got in the way. On the morning of June 8 1967, the USS Liberty was navigating in international waters in the Mediterranean Sea approximately 15 miles north of the Sinai Peninsula and about 170 miles west of the Syrian invasion site on the Sea of Galilee. For six hours throughout the morning of June 8, Israeli jet aircraft and flying boxcars buzzed over the Liberty thirteen times, sometimes flying as low as 200 feet directly overhead. When the attack occurred Liberty was flying the normal 5X8 foot flag. In the midst of the attack a signalman ran up a larger American flag -the holiday flag- that wafted unfurled in a twelve-knot breeze. Liberty’sname and call numbers were clearly visible to any of the reconnaissance aircraft. Around 2 PM Liberty time, Israeli high performance jet aircraft, followed by slower and more maneuverable jets carrying napalm, began the attack on the spy-ship. Perhaps some of these veterans post traumatic stress wounds would better heal when we the people acknowledge every June 8 as USS Liberty Remembrance Day because it already is in the hearts and minds of the American survivors of the Six Day War, their families, friends, and supporters.

Living with survivor’s guilt is never- ending processes through which I learned that anger keeps one spinning in a never-ending circle but with an exit that I call grace. I understand grace as having acceptance of what cannot be changed by acting in ways that help heal myself as I reach out to others by way of visiting the dying, or educating and inspiring listeners at speaking engagements to do something with the information I share. In short, the Serenity Prayer has been a big help to me.

I have worked on NOT blaming others but appreciating others especially Eva, Capt. McGonagle, my shipmates, friends, and all who seek peace by working for justice… Less than two months before the 52nd anniversary of the attack on Liberty, I received a phone call from Larry Slavens a shipmate who had been severely wounded during the attack. Larry has not been involved in the USS Liberty Veterans Association and we had not spoken in over five decades but we talked on the phone for nearly two hours. Larry lives not far from my hometown and in April 2019, Kansas’s Lawrence Journal World published an interview with Larry Slavens about his memories of that day in infamy. I feel better about me and whenever I learn about others who are telling the truth out loud as a way to peace within….

END SCROLL: A BUGLER PLAYING “TAPS” ACCOMPANIES THIS SCROLL TO INCLUDE PHOTOS:

Twenty-five men were killed ‘on the job’ in the USS Liberty’s Naval security Group [intelligence] Department. This movie is dedicated to the USS Liberty Veterans and in Honor of the following 34 men who perished onboard the USS Liberty on 8 June 1967.

LT Stephen Spencer Toth, USN – Died of rocket fire while on port side, 01 or 02 level.

Fathers work,
To earn their pay,
To raise their families,
Day by Day.
Fathers console their children, When they are sad,
They punish their children when they are bad.
Some families don’t have Fathers, They are killed or die,
Some are in prison,
Others run away and cry.
But without Fathers,
Where would we be,
Probably swimming out farther, Then drowning, helplessly at sea.

Included in the script are excerpts of the speech Ernest Gallo, USS Liberty Veterans President delivered at Arlington Cemetery commemorative service on 8 June 2017: