Christ was NOT the last name of Jesus

Christ as a word can be offensive, used as an oath or strong expression of disbelief, dismay, awe, disappointment, pain, etc.,

The Cosmic Christ is The Union of Human and Divine

The Cosmic Christ: The Union of Human and Divine

Please do not think me a heretic, but it is formally and theologically incorrect to say ‘Jesus is God, as most Christians glibly do and then need to ‘prove’…

We have much less need to ‘prove’ that Jesus is God (which of itself asks nothing transformative of us). ..

The good news is that we also are part of the eternal divine embrace, now as the ongoing Body of Christ extended in space and time. We are the second coming of Christ…

Jesus is the union of human and divine in space and time; whereas the Christ is the eternal union of matter and Spirit from the beginning of time.

In later centuries, the church lost this mystical understanding in favor of fast-food, dualistic Christianity that was easier for the average parish believer to comprehend. We pushed Jesus, and we lost Christ…

Early Franciscans saw the Christ Mystery mirrored in every aspect of creation, from elements, to weather, planets, animals, attitudes, non-Christians, art, and even to enemies…+

As I reflected on Rohr’s reflection and this week in the WORLD in the era of Trump;

I recalled the 1987 classic, The Different Drum: Community Making and Peace, by Dr. Scott Peck, in which he defines the spiritual life as fluid and proposes that we all may pass back and forth repeatedly through any of the four stages of the soul. The soul is defined as the spiritual or immaterial part of a human being or animal and is regarded as immortal.

Donald John Trump is the 45th and current President of the United States. Prior to entering politics Trump was a businessman and television personality.

In a 2015 interview with CNN before Trump became POTUS, Donald Trump talked about his Christian faith but said he’s never sought forgiveness for his sins stating: “I think if I do something wrong, I think, I just try and make it right. I don’t bring God into that picture. I don’t.”

Trump said that while he hasn’t asked God for forgiveness, he does participate in Holy Communion: “When I drink my little wine — which is about the only wine I drink — and have my little cracker, I guess that is a form of asking for forgiveness, and I do that as often as possible because I feel cleansed.”

According to Scott Peck’s Stages of the Soul: Stage One is essentially our infancy in the spiritual life.

Like a wild child, a person in this soul stage reflects the inner chaotic and anti-social, unregenerate soul that is interested only in its own self-satisfaction and ego, much like the stereotypical spoiled child.

Stage One people may claim to love others, but their behavior reflects they love their own pleasure, money, power and prestige above any others.

For Stage One souls, it really is ALL about them!

Stage Two souls seek to “let their light shine” and will live virtuous lives and do many good works.

They also can be judgmental of others, self-righteous, rigid of thought, cold of heart, legalistic concrete literal thinkers and may even be guilty of a lukewarm faith.

They want to do right and they even may desire to love and please God, but have not yet fully opened up to the Inner Light and thus have not yet been set free:

Jesus said, “You shall know the truth and the truth will set you free.” -John 8:32
Stage Two Souls prove they have not yet been set fully free by seeking “security” by way of submitting to human authority other than their own CONSCIENCE for guidance.

The difference between a Stage One and Stage Two Soul, is that a One would NOT even notice a neighbor in need, while a Two intuits that we are to be our ‘brother’s keeper’ and thus they might even respond like the good Samaritan who cared for a total stranger in dire need.

Most theologians agree that the opposite of faith is not disbelief: the opposite of faith is fear.
Stage Three Souls have not just awoken, they have evolved!
This evolution has led them to the realization of what Jesus was really talking about in the Sermon on the Mount/The Beatitudes, which sound like crazy promises, but are all about waking people up to The Divine within themselves and all others!

A stage Three Soul may reject Jesus as God, but they often agree with the philosophy of Jesus, which Thomas Jefferson gifted US with when he weeded out the miracle stories from the gospels and clarified the teachings and ethics of Jesus in:

THE LIFE AND MORALS of JESUS of NAZARETH

A Stage Three Soul will see that a neighbor is everyone on the planet and not just those who think and look the same and are born in the same geographical location.

Stage Four Souls have been enfleshed by Francis of Assisi who was so in love with God that he saw God within EVERY human being and ALL of Creation:

And Paramahansa Yogananda, who brought the concept of universal Christ Consciousness/ the Cosmic Christ to the World in the early 20th century. 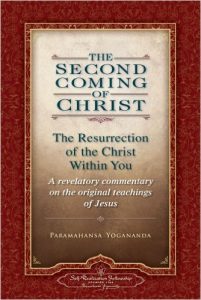 In titling his book, The Second Coming of Christ, Paramahansa Yogananda explained:

What is necessary is for the cosmic wisdom and divine perception of Jesus to speak again through each one’s own experience and understanding of the infinite Christ Consciousness that was incarnate in Jesus.

That will be his true Second Coming.

A thousand Christs sent to earth would not redeem its people unless they themselves become Christlike by purifying and expanding their individual consciousness to receive therein the second coming of the Christ Consciousness, as was manifested in Jesus…

The era of Donald J. Trump overflows with opportunities to be instruments of the change we want to see, but:

“Christ you know it ain’t easy, You know how hard it can be, The way things are going, They’re going to crucify me”-John Lennon

Waiting for A Dream in Africa Abdennour Toumi