2,000 years ago The Cross was NOT a religious symbol or piece of jewelry

The Cross was ancient Rome’s method of capitol punishment

Two thousand years ago the Cross had NO symbolic religious meaning and was not a piece of jewelry.

When Jesus said: “Pick up your cross and follow me,” everyone then understood he was issuing a POLITICAL statement, for the road into Jerusalem was lined with crucified agitators, rebels, dissidents and any others who disturbed the status quo of the Roman Occupying Forces.

The gospel-which literally means “good news” that Jesus preached, was very political and a direct challenge to the politically powerful and self-righteous.

Jesus was never a Christian. The term ‘Christian’ was not even coined until the days of Paul, about 3 decades after Jesus walked the earth as a man.

Jesus was born lived and died a nonviolent Palestinian devout Jewish road warrior who rose up and challenged the job security of the Temple priests by teaching the people they did NOT need to pay for ritual baths or sacrificing livestock to be OK with God:

What really got Jesus crucified was disturbing the status quo of ancient Rome by teaching the subversive concept that God preferred the humble, the poor, diseased, outcasts, widows, orphans, refugees and prisoners enduring under a brutal military occupation above the elite makers and teachers of “the law.”

When Jesus said you must be born again, he was talking about a TRANSFORMATION of heart and mind to see the Divine in oneself, all others, all of creation and within every situation.

The early followers and lovers of Jesus were called members of THE WAY-being THE WAY Jesus taught to be:

NONVIOLENT and do the will of the Father: “What does God require? He has told you o’man! Be just, be merciful, and walk humbly with your Lord.” -Micah 6:8

Christians are suppose to believe that God is LOVE:

Our manifesto is the Sermon on the Mount, which means that we will try to be peacemakers. -Dorothy Day

Sermon on the Mount Spun for the 21st Century

When Jesus was about 33, he hiked up a hill and sat down under an olive tree and began to teach the people;

God’s name in ancient Aramaic is Abba which means Daddy as much as Mommy and He/She: The Lord has said, “My ways are not your ways. My thoughts are not yours.” -Isaiah 55:8
Jesus taught, “Blessed are the meek, for they shall inherit the earth.”

Jesus said, “Blessed are those who hunger and thirst for righteousness, they will be filled.”

Jesus added, “Blessed are the merciful, they will be shown mercy.”

“For with the measure you measure against another, it will be measured back to you,” Jesus warned his disciples as he explained the law of karma in Luke 6:27-38.

Jesus noted, “Blessed are the pure in heart, for they see God.”

The following Good News is thanks to a Bedouin named Mohammed Ali –which is also a Chapter in THIS BOOK:

In 1945, in the land just above the bend of the Nile, north of the Valley of the Kings, across the river from the city of Nag´ Hammâdi, under a cliff called Jabal al-Tarif, an Egyptian Bedouin named Mohammed Ali was gathering sabakh, a nitrate-rich fertilizer for the crops that he grew in the small nearby hamlet of al-Qasr.

He was aghast to stumble upon a skeleton as he dug, and bewildered when he uncovered a two-foot high earthenware jar. A bowl had been placed over the top, and it was sealed with bitumen.

At first, the Bedouin thought an evil genie was within, but when he shook the heavy jar, he heard things moving and thought it might be gold.

He smashed the jar open and out fluttered pieces of gold particles that he tried to catch, but they disappeared. When he peered into the jar, he was dismayed to find twelve leather-bound books.

Mohammed Ali was illiterate, so he placed no great value on books, but was confident he could sell them and make something for his troubles. So he carried the jar filled with books back to the homestead.

Now, Mohammed Ali also happened to be a fugitive from the law, for he had wielded the weapon that spilled the blood of a patriarch during a violent incident in a generations-long family feud, not so very long before.

After a few days of mulling over possibilities, he decided to give his find to the local Coptic priest for safekeeping. You see, he feared the authorities soon would be lurking about and would confiscate his possession before he could sell it and before his mother ripped out more pages she burned to keep the home fire going.

The priest passed the books on to his brother-in-law, a traveling tutor, who handed then over to the Coptic museum in Cairo on October 4, 1946.

The volumes were leather-bound pages of papyrus, and no doubt the gold dust that Mohammed Ali witnessed was from papyrus fragments that had broken off.

The ancient compositions, written in Coptic had been translated from ancient Greek; and under the leadership of UNESCO, Egypt, and the American scholar James Robinson, the collections of texts with titles like the Gospel of Thomas and the Gospel of Mary Magdalene were translated into many languages.

These ancient texts offer NO new answers; but they do provide us with a glimpse of Christianity at its very roots, and it was most diverse indeed.

The most likely source for these books that have become known as the Nag Hamadi Library was the Pachomius Monastery, which was about three miles from the burial site.

Scholars agree that most likely a monk from there buried these books in the wilderness under the cliff of Jabl al-Tarif for safekeeping.

These texts had been deemed heretical by those who were gaining power through the political arena: the Proto-orthodox.

In the 4th century, Emperor Constantine, a pagan warrior became the first Christian ruler, but waited until he was on his deathbed before being baptized.

I contend that the most decisive event in the history of Christendom occurred when Emperor Constantine accepted the Christian faith, for those who had once been persecuted were now protected by an earthly king.

Both a patriarchal monarchical state and church were formed at the same time.

Power struggles and debates were common among the early Christians.

Individual churches determined which texts were read, and they all had their favorites.

Constantine sought to unite his empire, and uniting the church was a savvy political move.

He announced he would pay for fifty illuminated copies of scripture to be bound, and thus the biblical canon was established and sealed.

There was fierce debate among the bishops about what should be included and what left out.

The proto-orthodox, who had now become the dominant voice, determined what was heretical for everyone.

The proto-orthodox demanded much-loved scripture to be burned, usually because it did not fit their understanding of God.

Many of these texts were considered Gnostic.

Gnostic texts offer deep mystery that is discerned via intuition, not rational thought.

This is not the way for fundamentalists.

A Gnostic is open to receiving intuitive knowledge of deep spiritual truth.

For students of the New Testament, this is a much greater find than the Dead Sea Scrolls. Forty of the texts had previously been unknown to modern scholars.

Thirty-five scholars worked diligently on these translations, and all agreed that the bound books themselves date back to the fourth century and were written in Coptic translated from Greek and Aramaic-which is what Jesus spoke!

The Gospel of Thomas is a collection of the sayings of Jesus, words of wisdom, proverbs, parables, and some very confounding mysteries.

About 35 of the 114 sayings have no counterpart in the New Testament, while at least 20 are almost identical, and 54 have similarities.

Many scholars concur that the sayings were originally written in Syriac, a dialect of Aramaic, the language of Jesus and his followers.

It is very possible the sayings are closer to the words Jesus actually spoke than what is found in the canonical gospels.

Two thousand years ago, there was lively debate about who Jesus was, and why he came.

The proto-orthodox, who were the majority, considered these gnostic texts anathema and thus deemed them heretical for many reasons.

The main reason is that they did not fit neatly into the evolving dogma.

Jesus said he came that we would have life to the full; abundant life [John 10:10] and that takes deep thought.

Falling in love with the Mystery of God is a great place to start and when we do:

We will begin our inner world again!

Godspeed on that coupled with COMMON SENSE as expressed in Thomas Paine’s flaming hope: 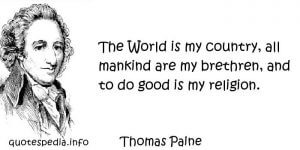 The Balfour Declaration and Brother Harold

The Majoritarian Evil Creeps into Senate, Congress and the Administration American Arabs