This video was captured by Emad abu-Shamsiyah, a Palestinian resident from Hebron as he watched and documented the zionist crime today Thursday March. 24th ’16. 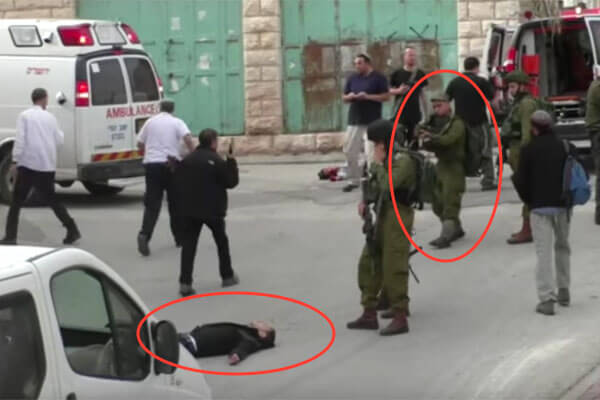 A zionist soldier shooting an injured Palestinian in the head.
It seems to be that it is a zionist habit to “finish” the injured Palestinians as no one seemed to be bothered not from the soldiers, the police officers nor even the paramedics. It is normal and expected as it is an official zionist policy dictated by their Rabbis.

Right before the shooting, it is clear that the zionist soldier gets orders from his commander to “finish” the injured Palestinian.

Shortly before the execution the two young Palestinian men, Abed-al-Fatah a-Sharif and Ramzi al-Qasrawi were shot injured under the pretext of “stabbing”.

Over 200 Palestinians were executed this way since October last year and no one seems to be bothered or pay attention.

It seems the zionists are faithful to their rabbis who dictate:

“We must not allow a Palestinian to survive after he was arrested. If you leave him alive, he will be released and kill other people,” Chief Israeli Rabbi Shmuel Eliyahu said, “we must eradicate this evil from within our midst.”