I don’t know if humor can change anyone’s minds about standing up to extremism and bringing peace to the Middle East, or if it can really bring different rival religious, ethnic or national groups together. But I do know that after performing my first standup comedy show this week, the Jewish, Christian and Muslim audience of more than 250 people were encouraged that good can come of it 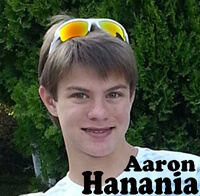 (Special Guest commentary) — I now know what I am actually good at doing! Stand up comedy and in general being in front of an audience is literally many people’s nightmares. Its my pleasure to be up in front of people.

(Click here to view my comedy segment during the 90 minute comedy show, which was followed by a Q & A session with the audience.)

But before I get into the show, people wonder why am I doing comedy. Saying that my Dad is Palestinian and my mom Jewish, my view on life is very unique to people.

Since my parents relationship is relatively unique and unusual, people wonder what my life is like because there are not many kids in my situation. Not only that, but a rare percentage of them, probably only one in a million, would want to do what I do, which is getting up in front of large crowds to entertain with a positive message, especially with humor.

I came up with the idea to do stand up comedy when my dad told me about his upcoming show which featured professional comedians Aaron Freeman and Arif Choudhury. Aaron Freeman is African American and Jewish. Choudhury is Muslim and from Bangladesh. Both of them are hilarious. Choudhury does more story telling and Freeman does much standup comedy.

I still don’t know what exactly clicked in my brain that made me want to do such a crazy thing. I asked him,”Hey dad is there a way I can perform with you guys?” He responded, “Umm, sure. I don’t see a problem, as long as you work hard at trying to be funny and come up with humorous jokes. Not mean. Not hurtful. But jokes that will make the audience laugh and feel good when the show is over.”

I started to write my own jokes about a week before the Saturday Night show. I needed to get them memorized and written to be pure funny. If people did not laugh, then I did not do my job.

I also wanted to do my first public standup comedy show without having to rely on notes during the show because I didn’t want to stumble by reading from notes held in my hand. That would be scripted up comedy NOT stand up comedy.

Unfortunately, reality hit me in the face when I realized that I needed my notes, just in case I forgot any jokes. Luckily I did not need to use them.

When you are waiting to do a huge performance, people tend to get nervous, especially when they are minutes away from their turn. Not me. The hardest thing for me was talking slowly and clearly because I tend to talk really fast. I delivered my jokes at a slow and steady pace and surprisingly, I did very, very well and got a lot of laughs from the packed audience.

There were more than 250 people in the audience. Every chair was taken. I noticed that laughing has a domino effect and is contagious. Because, if one person laughs, everybody else will join in and laugh even more.

I got through all my jokes and made people happy. I also got many people from all walks of life to be in one room enjoying the same show. I think it proves my point, when you see two strangers from different countries and religions, even thought they have never met before, talking with each other about the same thing.

People were immersed in the comedy and they put all their problems behind for two hours. I always love to do the first or be the first to do something. In this case I am one of the first high school kids who did stand up comedy with an interfaith comedy group.

I thought that other people should know about my experience. In my comedy, I showcased what problems many people experience. In the end, the morale is that wars and conflict should be ended in peace and come to a decision that you both benefit from.

My life at home is like a normal kid, it is just my parents relationship that is different. My mom and I are Jewish and we go to Temple often. I also go to Religious School. On the major holidays my father also attends the services with us.

I would and will do more standup comedy because I want to raise awareness and make people realize that everybody is normal, even people like my mom and dad.

Click here to view the highlights of the evening’s performance by all the comedians.

(Aaron Hanania is 14 years old and a freshman in high school in suburban Chicagoland. His website is www.Aaron411.com.)

Taking it to the Streets: March and Rally for The Nuclear Ban American Arabs

Pamela Geller is not for free speech – donors beware Bloggers