For twenty-eight years Israel’s Nuclear Whistle Blower, Mordechai Vanunu has been saying, “I have sacrificed my freedom and risked my life in order to expose the danger of nuclear weapons which threatens this whole region. I acted on behalf of all citizens and all of humanity.”

In October, Israel’s President Rivlin spoke at the opening session of a conference entitled “From Hatred of the Stranger to Acceptance of the Other,” on the escalation of tensions between Jews and Arabs.

In an attempt to converse with Israel and The Media, I launched the International Petition: We are not free, until Vanunu is free! which will remain open for signatures until they do! 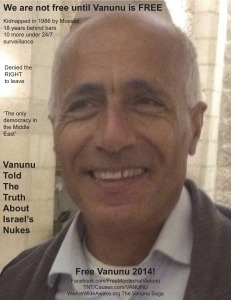 Within three weeks time over 750 Internationals signed the MoveOn Petition to Obama: End Israel’s Nuclear Deceptions! Free Vanunu 2014, which closes for signatures and comments to coincide with America’s election day.

The internationals thanked the President for the release of 45 years of top-secret documents exposing American delegates agreeing to Israel’s refusal to sign the Non-Proliferation Treaty and corroborating what Vanunu has been saying:
“When Johnson became president, he made an agreement with Israel that two senators would come every year to inspect. Before the senators would visit, the Israelis would build a wall to block the underground elevators and stairways. From 1963 to ’69, the senators came, but they never knew about the wall that hid the rest of the Dimona from them.

A few of the Petition comments follow, beginning with the first:

TNT/Telling Nuclear Truths from Clermont, FL
The longer Israel denies Vanunu his right to leave ‘the only democracy in the Middle East’ the greater his legend will grow because of people of Conscience

This man should be freed, he has paid much more than his due for revealing the truth, risking his skin because led by his conscience. It is preposterous to suggest he can still be any threat to Israel’s security. Though evidently even Palestinian kids playing on a beach and UN refugee centres are alleged “threats” to Israeli security, as we saw in the recent Gaza confrontation. That’s another matter..

I highly recommend all read “The Vanunu Legend” by journalist Eileen Fleming. High time President Obama earn his Nobel and Mr Vanunu’s freedom is long over due!

It is again time to remind the world of the plight of one of the most valued whistle-blowers of modern times. We owe much to Mordechai Vanunu, who exposed the existence of Israel’s illegal nuclear weapons. He gained only a harsh and exceptionally long prison sentence. We need to see him released.

JoAnne VanDatta from Pleasant Hill, OR

Exemplary leadership inspired by ethical, ecosocial principles,must inform and guide us out of these brutal times

Why is the USA so blatantly hypocritical? Why is the USA so dishonest? Why does the USA continue to support the rogue terrorist state of Israel, and not punish the state for it’s atrocities, its Apartheid system, its ethnic cleansing of Palestinian people?

If Syria, Libya, Serbia, Iran, Iraq behaved like Israel, with its continued flouting of U.N. resolutions, the USA would be threatening bombing attacks, invasion and war.

When will the USA realise that the world is increasingly cynical of America’s motivations in it’s foreign policies? Or is it that America doesn’t care what the global community thinks of America’s immoral behaviour because it is the biggest superpower bully on the block, and believes it can get away with anything it chooses?

America allowing Israel to possess nuclear weapons is the main reason why the Middle East has continued to be unstable and war-torn.

Since Mordechai Vanunu so courageously informed the world’s public of the fact that Israel was endangering the Middle East with it’s underhand development of nuclear weapons of mass destruction, which the USA and British governments have known about all along, he ought not to be considered the bad guy, but a hero…

Standing up is easy, standing up for truth & justice is not, BUT YOU CAN.

Vanunu is a hero to those who seek a better world. Israel’s hypocrisy in demanding others do not have nuclear arms while they won’t even admit to having their own is ridiculous and that the US and other have permitted it is shameful.

Vanunu should not have been imprisoned in the first place, as his actions did not deserve that level of response. The conditions imposed on him following his release in 2004 are not justifiable and should be removed immediately. Vanunu should not be subject to 24/7 surveillance and travel bans, which unjustifiably restrict his basic liberty and dignity as a human being.

Mordechai Vanunu is a hero to justice loving people all around the world. He should be completely free of all Israeli government restrictions now.

Free Vanunu immediately – he has “served his time” for telling the truth. It is an outrage that he is still being held against his will after 10 years out of prison; 28 years since he was kidnapped. President Obama: this is a chance to influence the Israeli government and be remembered for your integrity. Please act and do what you can to ensure Vanunu’s freedom, and to restart inspections of Dimona. Thank you.

A whistle blower by definition is a social hero. They warn the world of hidden and unrecognised dangers. We should be thankful and laud such persons – not persecute.

So dissapointed in USA being party to this outrage

I remember the day he was arrested. An abhorrent abuse of state power and a ‘criminal’ act of injustice, to incarcerate an inherently peaceful and decent man. Even Einstein regretted the splitting of the atom. 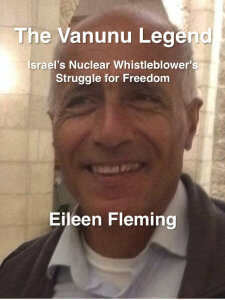