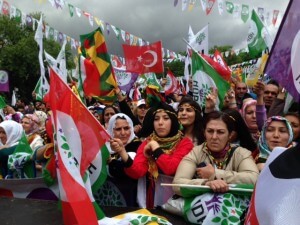 Ankara, Turkey — The countdown is underway as the Parliamentarian election campaign in Turkey heats up, and the question of a prospect for a presidential system has been foremost in every opposition leader’s rally speech. A constitutional amendment or a new constitution could be put in place for the presidential system dear to President Erdoğan.

Turkey’s current political system is parliamentary, one could argue to some extent semi-presidential; the constitution was drafted after a military takeover in 1980, and several amendments have been made since then.

Nearly 56 million Turkish citizens are eligible to vote on June 7th to choose 550 lawmakers for the Turkish Grand Assembly representing 85 constituencies in 81 provinces.

Twenty parties are competing, including the ruling Justice and Development Party (AKParti), the main opposition parties, the Republican People’s Party (CHP), the Nationalist Movement Party (MHP) and the People’s Democratic Party (HDP), along with 165 independent candidates all of whom will seek to draw voters across the country’s 81 provinces.

The AKParti needs at least 330 seats in order to gain a comfortable majority either to amend the constitution and introduce the projected presidential system law to be voted on by the Assembly, or to put a new constitution before the electorate through a referendum. At present the AKP has 312 seats in the current Assembly, having won over 49% of the votes in the 2011 general election. 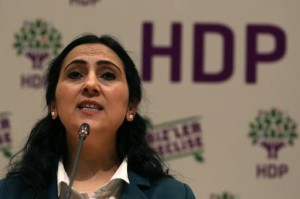 The question highlighting the excitement of the media and political analysts alike is whether the HDP will be able to pass the 10% barre. The party needs to win at least 50 to 60 seats which would then require the ruling party to discuss the eventuality of forming a coalition government.

More so, taking a traditional pro-Kurdish stance is an historical step for the HDP running on a platform predicated on human rights values, women’s rights and social promotion, and greater freedom for minorities — overall presenting an economic program focussed on planned retirement, conditions in the workplace, and a promise to raise the minimum wage from 943TL to 1800TL. In view of such an expansive program, the HDP in this election is portrayed as a national political party rather than a regional ethnic organization with independent candidates.

Geographically, the party’s strength lies in the southeastern region registering the highest concentration of the Kurdish population. But it also seeks to attract more urban “lefty” white Turkish voters from the large northern cities, particularly Turkey’s mega-city, Istanbul. Though, as a young Kurdish activist put it, “getting the CHP vote, for us, is considered as a Stockholm syndrome!”

The Kurdish People’s Democratic Party co-chair and leader, Selahattin Demirtaş, has stated the party does not plan to form a coalition with the ruling AKParti, nor will it lend indirect support to a possible AKParti government if his party passes the fateful barre.

So the fate of the HDP, which hopes to cross the 10% national vote threshold to form a caucus in the newly-elected Assembly on June 7th, will be decisive not just for the Kurdish minority, but also for the political future of President Erdoğan and the Justice and Development Party (AKParti). 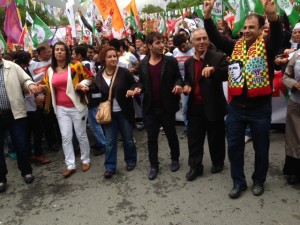 In the past three elections the AKParti established a comfortable majority of votes and formed a government on its own, but polls suggest there is increasing support for the HDP, which may cause the AKParti to lose its majority in the approaching election.

During the HDP campaign rally on Saturday in Ankara, the party’s leaders, base and militants once again expressed confidence that the HDP would pass the 10% threshold.  In her speech the party co-chair-woman Ms. Figen Yüksekdağ, criticized President Erdoğan and his Premier for slamming the Kurdish party. The militants would question the lack of legitimacy if their party does not reach the barre.

Though the failure would deprive them of representation, the party would remain a partner in peace talks with the Kurdistan Workers’ Party (PKK). “A lack of representation in the legislative branch would create a crisis of legitimacy, it would weaken the belief that Turkey’s Parliament represents all of Turkey,” Mr. Demirtaş said.

Thus far, the HDP has been a key interlocutor in President Erdoğan’s peace efforts with the PKK, aimed at resolving the Kurdish question in the southeast region, which has taken more than 40,000 souls sacrificed over three decades. 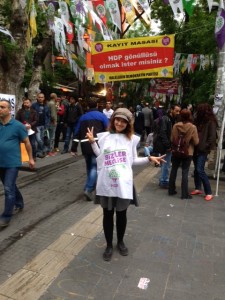 As Turkey’s fourth largest party the HDP continues to engage in politics and carry on in the struggle addressing all the societal issues that Turkey faces so the peace talks can resume after the June election. As a result, Turkish nationalists are accusing the HDP of links with the PKK, and President Erdoğan and the AKParti are wary of losing those votes because of their advances in the peace process.

Subsequently, the HDP is moving at high speed in the final lap of the campaign that ends Thursday. There have been dozens of attacks on the party’s offices in the run-up to polling day, and the harsh campaign rhetoric has reduced trust in politics in general.  But for the HDP, the government’s commitment to the peace process through democratic dialogue represents a valid attempt to respond, reconcile, and integrate the basic rights for Kurds in the blooming new Turkey. 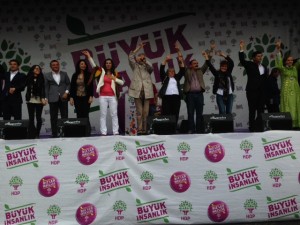 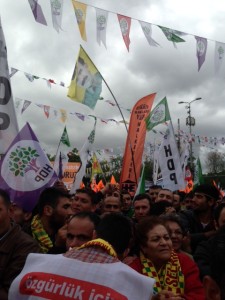