Increasingly, Dubai is demonstrating how profit and greed can overcome principle and justice, opening its doors without a whimper or a protest to allow Caterpillar, a company with a 60 year history of supporting Israel’s destruction of Palestinian homes, lands and lives to establish a base there. Caterpillar announced this week that it is building a “regional training center” in the money-driven Arab kingdom, to help train others to use their equipment that critics charge undermines freedom among Palestinians, Arabs and Muslims. 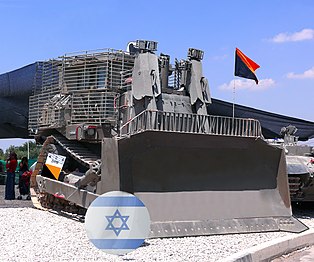 Caterpillar is at the top of the list of companies that peace protestors and BDS activists have targeted over the years because the Peoria, Illinois based company is home to the source of the equipment Israel uses to destroy civilian homes, lands and even kill people.

But this week, as if the Palestinian question is no longer important, the ruler of Dubai, Mohammed bin Rashid Al Maktoum, also the prime minister of the United Arab Emirates, has given Caterpillar approval to build the center which will provide support for its expansion into the Arab World which is driven by 7,000 representatives selling Caterpillar’s equipment to Arab governments and private contractors. Maktoum is a good leader and the disclosure raises questions.

It was a Caterpillar D9 heavy truck that was used by an Israeli soldier on March 16, 2003 to kill unarmed civilian protestor Rachel Corrie who was with a group of protestors openly seeking to prevent Israel from destroying the homes of Palestinian civilians in Rafah in the Gaza Strip. An American citizen, Corrie’s parents have waged a noble legal battle to get justice for their daughter, who was abandoned by most American public officials who have been bought off by Israel and by Caterpillar’s huge international lobbying conglomerate.

The Caterpillar D9 heavy tractor has been used by Israel to destroy hundreds of thousands of Palestinian homes in the Gaza Strip and in the West Bank and may be even more destructive than the hundreds of thousands of American missiles that Israel fires at civilian targets during its frequent air and ground assaults to clear land for the expansion of Israel’s terrorist settler network.

By allowing Caterpillar to operate out of Dubai, Emir Maktoum is cleansing decades of Israeli war crimes in the Arab and Muslim World. Emir Maktoum could take a principled stand and order the center closed and ban the use of Caterpillar equipment, starting a new trend “building for justice” rather than Israel’s exploitation of Caterpillar to destroy.

It is one of the most ironic and tragic symbolic events to take place in an Arab and Muslim country. The pretense that Arabs care about justice or desire peace in Palestine and the Holy City of Jerusalem is shattered by Emir Maktoum. But it has more to do with the surrender of the Arab World to Israel’s hegemony and hundred million dollar annual spending on propaganda and media to sanitize its war criminal practices not just int he Western news media, which Israel practically controls, but now in the Arab media as it expands and uses Israel’s media and Israel government and politics as a model.

How many Palestinian and Arab civilian homes were torn to pieces by Israeli soldiers and settler terrorists to make room for Israeli expansionism and destruction? It’s mind-boggling that an Arab country would be so uninformed to allow this to happen by accident or unknowingly.

Caterpillar is based in Peoria, Illinois which is the notorious home base of several American Arab and Lebanese politicians and government officials who have turned their back on Arab rights. They include Ray LaHood, the former congressman and former U.S. Transportation Secretary who while in the Congress supported and sponsored a bill to declare occupied Jerusalem as the exclusive capitol of Israel, denying Palestinian Christian and Muslim rights to the city. His son, State Rep. Darin LaHood, who is running for Congress in the 18th District, is the co-sponsor of legislation introduced in the Illinois legislature by activist allies of the State of Israel to deny Americans the fundamental and Constitutional right to criticize Israel’s policies.

The bill was introduced by State Senator Ira SIlverstein and State Rep. Sara Feigenholtz to deny state pension fund investments to any educational institution or organization that votes to criticize Israel’s brutal policies of killing Palestinian civilians and stealing Palestinian lands. LaHood, again an American Arab legislator, is the symbol of how Arabs have surrendered justice and peace to Israel’s brutality with little more than a whimper and millions of dollars in clout and profit.

There hasn’t been one word of protest against Israel’s oppression, its lobbying efforts to tighten its grip on the free-thinking of Americans, or the headlock it has placed by American politics and the biased mainstream American news media.

Caterpillar has acted as if Rachel Corrie never existed, or that Palestinians and Arabs do not have rights, or even worse that Israel has not used its equipment to strip civilians of their civil and legal rights in occupied Palestine at the point of a weapon. All Israel has to do is divest itself from Israel and refuse to sell the destructive equipment to Israel and take a principled stand against Israel human rights abuses. But as long as LaHood and other American elected officials are around to protect Israel or act against critics of Israel, Caterpillar can continue to undermine its principles and serve as the cornerstone to injustice.

Here is the press release that Caterpillar put out on Sunday May 11, 2015 celebrating its expansion into the Arab World and boasting about how much it does in business in the Arab World, a boast that should put every Arab to shame, including those like Darin LaHood who have sold out principle and justice to the Israeli lobby.

Caterpillar (NYSE: CAT) today announced that it will build a Regional Training Center for the African and Middle East Region (AME) in Dubai, United Arab Emirates. The Center will offer hands-on machines and power systems technical and sales training to Caterpillar’s dealers and customers in the AME region.

At an investment of more than $7 million, the approximately 1,700 m2 center will employ about 40 people, mostly high-level technical staff who will primarily be recruited from the region. The more than 7,000 technicians at AME Cat dealers have some of the most direct connections with Caterpillar customers as they service and maintain their equipment. The training they’ll receive at the new Center in Dubai will help to enhance their skills and knowledge on both product and the latest product support technologies.

“Our Training Center in Dubai is a key part of our plans for the Middle East and Africa and will ensure Caterpillar and our dealers can be relied upon for providing unsurpassed support to our customers. This is an important region for Caterpillar and we expect to see strong, continued growth for our customers, and we will grow to support that,” commented Nigel Lewis, Vice President with responsibility for Caterpillar’s EAME Distribution Division.

The Center will also feature a lab for Scheduled Oil Sampling analysis that will help meet critical customer required turnaround time of emergency samples and reduce downtime of Caterpillar products in the region. The Center will be located at Caterpillar’s Middle East parts distribution center and Regional Sales and Marketing office in Jebel Ali, Dubai.

The Center is expected to be operational in the last quarter of this year.

For nearly 90 years, Caterpillar Inc. has been making sustainable progress possible and driving positive change on every continent. Customers turn to Caterpillar to help them develop infrastructure, energy and natural resource assets. With 2014 sales and revenues of $55.184 billion, Caterpillar is the world’s leading manufacturer of construction and mining equipment, diesel and natural gas engines, industrial gas turbines and diesel-electric locomotives. The company principally operates through its three product segments – Resource Industries, Construction Industries and Energy & Transportation – and also provides financing and related services through its Financial Products segment. For more information, visit caterpillar.com. To connect with us on social media, visit caterpillar.com/social-media.

What Dubai is doing is small in financial terms, but is huge in terms of undermining Arab rights in the Middle East and strengthening Israel’s government war crimes in the region. It’s shameful that Arabs would support and allow this, and even more shameful that money trumps justice at Caterpillar where profits are more important, apparently, than bringing justice to civilian victims of the destruction driven by their products.