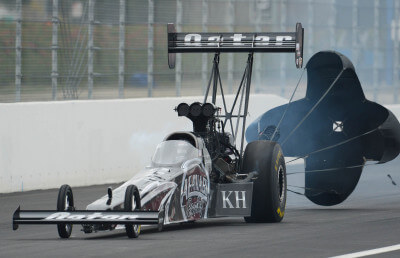 GAINESVILLE, Florida – The 44th annual Amalie Motor Oil Gatornationals, considered “A Major” on the NHRA tour by many, is named for the Florida Gators, the mascot of the nearby University of Florida, and the Qatar Al-Anabi Racing Top Fuel Team is due for a Gatornationals victory.

Drivers Khalid alBalooshi and Shawn Langdon enter the Florida race eager to return the Qatar Al-Anabi Racing Top Fuel Team, the three-time and defending World Championship team owned by His Excellency Sheikh Khalid bin Hamad Al Thani, to the Gainesville winner’s circle for the first time since 2011 at this weekend’s NHRA Gatornationals. It is the third of 24 races making up the United States’ 2014 NHRA Mello Yello Drag Racing Series.  Qualifying is set for Friday and Saturday with eliminations scheduled for Sunday.

The Qatar Al-Anabi Racing Team won the Gatornationals in 2009 and 2011 with drivers Larry Dixon and Del Worsham, respectively.  Neither Langdon nor alBalooshi has won the Gatornationals, but team manager Alan Johnson and crew chiefs Jason McCulloch and Brian Husen have extensive experience and multiple wins in Gainesville.  With both the silver and gold Al-Anabi teams running well, 2014 could be the year the team returns to the Gatornationals winner’s circle.

“I am very excited to go the third race of the season in Gainesville,” alBalooshi said. “It is a big race at good track, and our Al-Anabi team has already shown we can win there; we have a good hot rod this year so I feel good about the race this week. I am looking forward to seeing everyone and getting back in the car.”

“The Gatornationals is always a big event because it’s our first event on the (United States) East coast,” Langdon said. “It’s always an event we enjoy.  Depending on the conditions, you can make some really good laps in Gainesville.  The Al-Anabi team is confident going into the Gatornationals with the setup we have; in the last couple of years, we haven’t had too much success there, but we still feel very confident heading into this weekend.  Our team has won this race a couple of times, and I know Alan, Brian and Jason will have our cars ready to race this weekend.”

AlBalooshi enters the Gatornationals in second place in the NHRA Mello Yello Top Fuel point standings.  He won the Circle K NHRA Winternationals last month, the season’s first race and had a disappointing quarterfinal loss at the second race of the season in Phoenix.  Still, the Dubai native knows the gold Al-Anabi team has massive potential.

“I know exactly what happened with us in the second race (In Phoenix last month),” alBalooshi said.  “I think everything will be OK for our team this week.  I’ve been talking with my crew chief (Jason McCulloch), and I know what happened in our second round with (Doug) Kalitta.  I think we will be good for the next race.  Our Al-Anabi team is going in the right direction this year.  But what I can tell you right now is that our team is doing a very good job, and I am excited to get to the race track and do my job in Florida this week.”

Langdon enters the Gatornationals in seventh place in the NHRA Mello Yello Top Fuel point standings.  The 203 NHRA Mello Yello Top Fuel World Champion has had a great car in each of the season’s first two races but has only two quarterfinal showings to his credit.  He qualified second at the season-opening race in Pomona, Calif. but lost a very close drag race to his teammate, Khalid alBalooshi (3.73 to 3.76 seconds with a .007 margin of victory), and alBalooshi went on to win the race.  In Phoenix, he was the No. 4 qualifier but lost to race winner Antron Brown when the engine on the Al-Anabi dragster dropped a cylinder.  The silver Al-Anabi dragster continues to compete at a very high level despite some unfortunate racing luck.

“I still feel great about the Al-Anabi team and the possibility of winning this weekend in Gainesville,” Langdon said.  “The Al-Anabi car has been strong this year, and it has run well. We just lost a great drag race in Pomona and had an issue when the engine dropped a cylinder in Phoenix. We’re not far off base.  We can still make good runs, and we still have a car worthy of winning races.  It’s not anything we’re down and out about.  We’re seventh in points and 60 points out of the lead, but we still feel very confident that the Al-Anabi team is only a race or two away from getting back to the top of the point standings.”

Al-Anabi Racing operates out of multiple locations in both the United States and Qatar.  In the United States, the Brownsburg, Ind.-based operation is a two-car NHRA Mello Yello Drag Racing Series team that is managed by Alan Johnson Racing. Sheikh Khalid’s initiative has created increased international awareness of the State of Qatar while highlighting the nation’s international sports outreach. Alan Johnson is a 15-time NHRA champion in various capacities including crew chief, team owner and team manager.  For additional information on the Al-Anabi Racing Team, team manager Alan Johnson or drivers Khalid alBalooshi or Shawn Langdon, please visit www.alanabiracing.com.