Arab Radio: The Mideast and the Russia-Ukraine Crisis

Join Dr. Atef Gawad in discussing ” The Mideast and the Russia-Ukraine Crisis: Where does it Stand” with his distinguished guests, on Friday, March 4th, 2022, from 8 to 9 a.m. (EST).

Program will air live on Facebook and on Radio Baladi / US Arab Radio.

Opinions vary as to who to blame for the eruption of war in Ukraine. Some blame President Putin for his choice of military action and his miscalculation.

Others blame President Biden for not doing enough to deter Putin. In fact, Biden may have provided the grounds for Putin’s miscalculation. But focusing on where the Middle East stands we need to first analyse the abstention of the UAE at the UN Security Council. 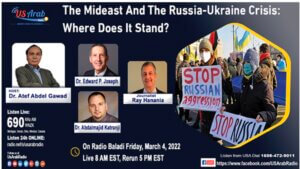 The Russia-Ukraine crisis is pushing oil and gas prices up and that translates into more cash for oil and gas producers including Arab Gulf states. But those countries have been seeking closer relationships with Moscow for sometime now. Other countries in the Middle East have been protesting interference in their domestic affairs.

So how do these countries balance the dilemma and challenges inherent in the Crisis? To find answers to these and other questions we have a group of distinguished guests and experts:

From Michigan, Dr. Abdalmajid Katranji, who is a political analyst and an expert on the Middle East, and from Chicago journalist Ray Hanania, and from Washington, Edward Joseph, a professor at the School of Advanced International Studies (SAIS) at Johns Hopkins University.

Dr. Edward P. Joseph: A Professor at the School of Advanced International Studies (SAIS) at Johns Hopkins University. With fifteen years in conflict zones, Edward P. Joseph brings extensive field experience to his teaching and writing on conflict management at Johns Hopkins School of Advanced International Studies. He is a frequent commentator on political affairs and crises on a range of Middle East networks.

Journalist Ray Hanania: Is an award-winning former Chicago City Hall political reporter. Currently, he writes columns for the Southwest News Newspaper Group in Chicagoland, the Patch Online, and is the US Special Correspondent for the Arab News Newspaper based in Riyadh.

Dr. Abdalmajid Katranji: is a political analyst and an expert on the Middle East, Islam, and Muslim American Politics. He is a board member of Emgage Action USA, one of the leading Muslim American Political Advocacy groups in the United States. He also serves on the national board of the Syrian American Council. He has spoken at the United Nations, European Council, United States Institute for Peace, and the White House.

The Program will be live on WNZK 690 AM, from Michigan to its audience in Michigan, Toledo, Ohio, and Windsor – Canada