“A Beautiful Day In The Neighborhood” starring Tom Hanks as Mr. Rogers based on the 1998 Esquire expose “Can You Say…Hero?” by Tom Junod offers America a Christianity that Jesus would thank God for.

Monday on Fox News Energy Secretary Rick Perry claimed President Trump is “God’s chosen one” and opined, “God uses imperfect people through history. King David wasn’t perfect. Saul wasn’t perfect. Solomon wasn’t perfect. And I actually gave the president a one-pager on those Old Testament kings about a month ago. And I shared it with him and I said, ‘Mr. President, I know there are people who say that you say you were the chosen one.’ And said, ‘You were.’ I said, ‘If you are a believing Christian, you understand God’s plan for the people who rule and judge over us on this planet in our government.’”

Once upon a time “Believing Christians” believed Jesus was God’s chosen. They also understood good and evil cut through every human heart and Free Will means that we get to choose which rules ours. Once upon a time Christians also knew pride precedes falls. Mr. Trump proclaimed “I am the chosen one” while defending his administration’s trade war with China.

Rick Perry’s ideology of Trump and God is common among white conservative religious fundamentalists and Stage One Souls:

Stage one upon this journey -that begins from within-is essentially our infancy in the spiritual life. A stage one soul reflects the inner chaotic and anti-social, unregenerate soul that is interested only in its own self-satisfaction and ego, much like the stereotypical spoiled child. 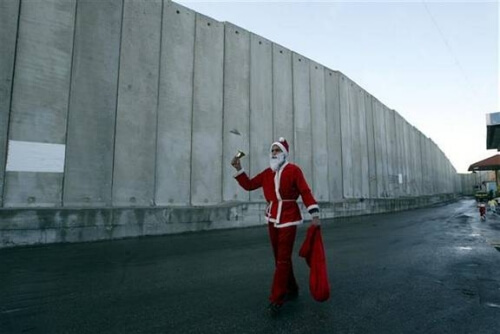 I wonder about the Christians who believe Mr. Trump’s policies are bringing America closer to what they believe is a Christian nation.

I wonder what Jesus would say to them about removing children from their families and warehousing them in cages?

On Thanksgiving Eve my husband and I enjoyed Tom Hanks being Mr. Rogers in “A Beautiful Day In The Neighborhood.”

I was also inspired to learn more about the journalist who wrote the Esquire piece that the movie is based upon and so what follows are excerpts from:

Can You Say…Hero? by Tom Junod

Once upon a time, there was a little boy born blind, and so, defenseless in the world, he suffered the abuses of the defenseless, and when he grew up and became a man, he looked back and realized that he’d had no childhood at all, and that if he were ever to have a childhood, he would have to start having it now, in his forties. So the first thing he did was rechristen himself “Joybubbles”; the second thing he did was declare himself five years old forever; and the third thing he did was make a pilgrimage to Pittsburgh, where the University of Pittsburgh’s Information Sciences Library keeps a Mister Rogers archive. It has all 865 programs, in both color and black and white, and for two months this past spring, Joybubbles went to the library every day for ten hours and watched the Neighborhood’s every episode, plus specials—or, since he is blind, listened to every episode, imagined every episode. Until one night, Mister Rogers came to him, in what he calls a visitation—”I was dreaming, but I was awake”—and offered to teach him how to pray.

“But Mister Rogers, I can’t pray,” Joybubbles said, “because every time I try to pray, I forget the words.”

“I know that,” Mister Rogers said, “and that’s why the prayer I’m going to teach you has only three words.”

“What prayer is that, Mister Rogers? What kind of prayer has only three words?”

He has spent thirty-one years imagining and reimagining those walls—the walls that have both penned him in and set him free. You would think it would be easy by now, being Mister Rogers; you would think that one morning he would wake up and think, Okay, all I have to do is be nice for my allotted half hour today, and then I’ll just take the rest of the day off….But no, Mister Rogers is a stubborn man, and so on the day I ask about the color of his sky, he has already gotten up at five-thirty, already prayed for those who have asked for his prayers, already read, already written, already swum, already weighed himself, already sent out cards for the birthdays he never forgets, already called any number of people who depend on him for comfort, already cried when he read the letter of a mother whose child was buried with a picture of Mister Rogers in his casket, already played for twenty minutes with an autistic boy who has come, with his father, all the way from Boise, Idaho, to meet him. The boy had never spoken, until one day he said, “X the Owl,” which is the name of one of Mister Rogers’s puppets, and he had never looked his father in the eye until one day his father had said, “Let’s go to the Neighborhood of Make-Believe,” and now the boy is speaking and reading, and the father has come to thank Mister Rogers for saving his son’s life….

Once upon a time, a man named Fred Rogers decided that he wanted to live in heaven. Heaven is the place where good people go when they die, but this man, Fred Rogers, didn’t want to go to heaven; he wanted to live in heaven, here, now, in this world, and so one day, when he was talking about all the people he had loved in this life, he looked at me and said, “The connections we make in the course of a life—maybe that’s what heaven is…

She was a minister at Fred Rogers’s church. She spent much of her time tending to the sick and the dying. Fred Rogers loved her very much, and so, out of nowhere, he smiled and put his hand over hers. “Will you be with me when I die?” he asked her, and when she said yes, he said, “Oh, thank you, my dear.” Then, with his hand still over hers and his eyes looking straight into hers, he said, “Deb, do you know what a great prayer you are? Do you know that about yourself? Your prayers are just wonderful.” Then he looked at me. I was sitting in a small chair by the door, and he said, “Tom, would you close the door, please?” I closed the door and sat back down. “Thanks, my dear,” he said to me, then turned back to Deb. “Now, Deb, I’d like to ask you a favor,” he said. “Would you lead us? Would you lead us in prayer?” Deb stiffened for a second, and she let out a breath, and her color got deeper. “Oh, I don’t know, Fred,” she said. “I don’t know if I want to put on a performance….”Fred never stopped looking at her or let go of her hand. “It’s not a performance. It’s just a meeting of friends,” he said. He moved his hand from her wrist to her palm and extended his other hand to me. I took it and then put my hand around her free hand. His hand was warm, hers was cool, and we bowed our heads, and closed our eyes, and I heard Deb’s voice calling out for the grace of God. What is grace? I’m not certain; all I know is that my heart felt like a spike, and then, in that room, it opened and felt like an umbrella. I had never prayed like that before, ever. I had always been a great prayer, a powerful one, but only fitfully, only out of guilt, only when fear and desperation drove me to it…and it hit me, right then, with my eyes closed, that this was the moment Fred Rogers—Mister Rogers—had been leading me to from the moment he answered the door of his apartment in his bathrobe and asked me about Old Rabbit. Once upon a time, you see, I lost something, and prayed to get it back, but when I lost it the second time, I didn’t, and now this was it, the missing word, the unuttered promise, the prayer I’d been waiting to say a very long time.“Thank you, God”… [Can You Say…Hero? by Tom Junod 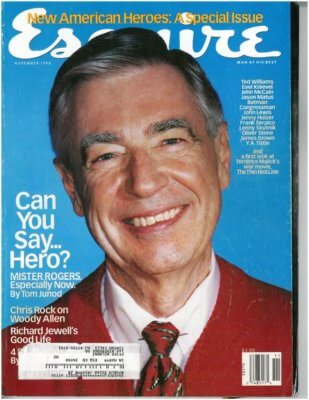 Back in the 1980’s, I appreciated Mr. Rogers for thirty minutes of babysitting and a daily highlight for my toddler, who is now 35 years old.

Today I appreciate Mr. Rogers for reminding us how to “pray without ceasing” is just to remember to say “Thank you, God”.

This grateful American concludes that we need Christians like Mr. Rogers:

Brussels terrorism and Edjteehad in the West Abdennour Toumi