Before Israel became a state in 1948, the indigenous Christians in the Holy Land comprised 20% of the total population. Today approximately 150,000 individuals are known as “the living stones” of the Holy Land.

If the Christian Exodus does not stop soon, Christianity could soon disappear in the land where Jesus taught that whatever one does, or does not do unto the least: one is doing it, or not unto God.

The event “A Night in Bethlehem” is Co-Chaired by Faith Libbe, who is the very same Faith who was the instrument to irrevocably change my life and it happened just prior to my first of eight life-altering experiences in Israel Palestine. I lost touch with Faith but will never forget the day she shared a photo that ran in the Central Florida Catholic in 2000. 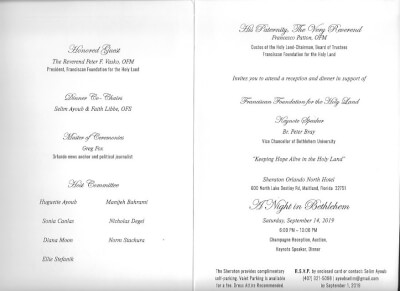 Photographer Debbie Hill had captured Jorge/George of Beit Jala, standing in the rubble of what had been his bedroom until the Israeli forces blew his home apart the night before. 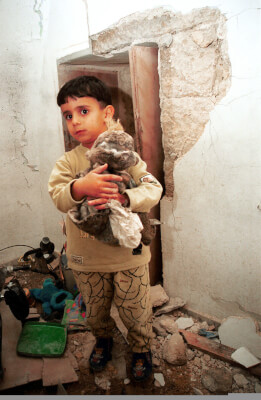 The shrapnel found in George’s bedroom read “MADE IN USA” and if George had been in his bed; he most likely would be dead. As Faith told me his story my heart cried, “Do Something!”

ONE thing I did was meet George in 2005, and as I was writing fiction at the time I told his story through the following fictional characters Jack and Terese from KEEP HOPE ALIVE:

Jack wrestled with asking if any Hamas members were around to talk with, but as nobody else had anything more to say, he kept his mouth shut and watched Terese’s face. She was anxious to leave for Beit Jala, the west side of Bethlehem, to meet a little boy she had first seen in an American Catholic newspaper five years before. George had been captured on film the morning after his bedroom had been destroyed by Israeli gunfire the night before.

The IDF flew American-made Apache helicopters over the peaceful Christian village in retaliation for the action of some militants who had infiltrated to snipe across the stretch of open land a few miles away into the Jewish settlement of Gilo. A four-foot hole was blown into George’s bedroom with shrapnel that read, “MADE IN U.S.A.”

Terese had clipped the photo of George as soon as she saw it, placed it in an antique frame, and set it on her home altar, where she lit candles and then thought about people in need. Every time she looked in George’s eyes, she heard her heart say, “Do something.”

When Khaled had first told Jake and Terese he was planning the Olive Trees for Peace trip to Israel and Palestine, she knew she wanted to go and find George. Through well-placed friends and the Internet, he was located, and the ten descended on the family, who lived in Beit Jala, just before sundown. George was now in the fourth grade, shy, and withdrawn. He, his mother, and sister all still suffered post-traumatic stress syndrome from the night when U.S.-made bombs blew open the wall in front of George’s empty bed. He had been hiding in his parent’s room and fainted when he heard the boom that came from the room he slept in. Terese felt badly for intruding on the family and wished she hadn’t come to them until George looked at her sideways, smiled the smile of an unscathed child, and whispered, “I like you.”

George’s father spoke while fighting back tears. “There was absolutely no gunfire coming from our side of the neighborhood. None at all–it was quiet here. We are not bitter, and although the government never apologized, we forgive, but it is still very hard.”

Jack was miserable as he thought, this is what my government calls collateral damage… [end excerpt]

The principal purpose of the FFHL is to help stem the Christian exodus from the Holy Land by providing programs and projects that will serve as incentives for the Christians to remain as well as safeguarding the basic human rights of the Christian Palestinian minority living in the Holy Land. 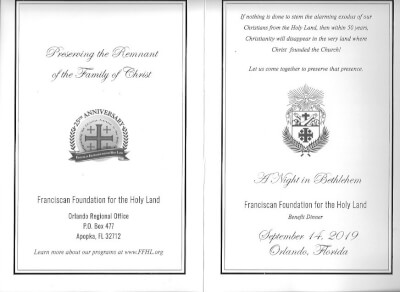 Because the invitation from FFHL put me in mind of a wedding, I recalled the following parable that Jesus told about a Bridegroom and ten Virgins.

In ancient times, weddings went on for days [if not weeks] and anyone who accepted an invitation to a wedding understood it was a commitment of time and money, for jobs were abandoned in order to be at the happening.

The custom was for the Bridegroom to decide when the wedding would take place; it could be on the first day of the festivities or even the ninth!

No one knew when the Groom would appear, and Jesus related how five out of the ten brides were unprepared for their man.

Some were out shopping when he came, and so they were left out of the Bridal Chamber and you can imagine how frustrated they were.

Parables are short stories that invite the reader to decide who they relate to and what it means to them on the heart level.

Jesus didn’t hit his listeners over the head with his message; he led by example not lectures and encouraged people to allow their imaginations to speak to them.

“Imagination is evidence of The Divine.”-William Blake

Jesus was always on about trying to wake up his audience, to stay alert and read the signs of the times.

No one knows when the end of time will come, but “even if the end of the world comes tomorrow. I would plant an olive tree today.”-St. Francis of Assisi

Jesus was never a “Christian” for that term was not even coined until three decades after Jesus walked in the land called Holy.

Jesus was born and died a radically nonviolent Palestinian devout Jewish Road Warrior who told his followers to go out and make disciples; and all a disciple is- is one who does what the Master teaches.

Jesus had very few friends within the Temple Authority for he challenged their job security by teaching the people they didn’t have to pay the priests for ritual baths or sacrificing livestock to be OK with God; for God was already within them and already loved them just as they were: poor, oppressed, diseased, outcasts, widows, orphans and refugees all enduring under a brutal military occupation.

The authority of God, up until 2,000 years ago, was understood to be external.

Jesus placed God in the hearts of his hearers and elevated them to the same level Caesar claimed to hold!

Jesus was a storyteller that presupposed that his listener already knew it all and they didn’t need any outside authority to tell them what was wrong or right.

Jesus’ message was that the Divine authority is already within the heart of every being and so I imagine him smiling at my spin on his Beatitudes/blessings:

When Jesus was about 33, he hiked up a hill and sat down under an olive tree and began to teach the people:

God’s name in ancient Aramaic is Abba, which means Daddy, as much as Mommy and He/She/The Lord has said, “My ways are not your ways. My thoughts are not yours.” -Isaiah 55:8

Jesus proclaimed: “Blessed are the meek, for they shall inherit the earth.”

“For with the measure you measure against another, it will be measured back to you” Jesus warns his disciples as he explains the law of karma in Luke 6:27-38.

In other words: how comforted you will be when you WAKE UP and see God is already within you, within every man, every woman and every child.

The Supreme Being is everywhere, the Alpha and Omega, beginning and end. Beyond The Universe -and yet so small; within the heart of every atom.