Abu Ali was born to a Palestinian American immigrant and an American mother from Kentucky. He started doing comedy at the age of 25 and has been entertaining audiences around the country to break through the stereotypes that the American public often has of Arabs and Palestinians. His father is Mustafa Owaynat, a longtime Chicago area Palestinian activist.

His comedy is both edgy and hilarious, and he’s not afraid to talk about it.

“I am a stand-up comedian with outstanding talents; I was born and raised in Chicago Illinois To a Palestinian Immigrant Father and an American Mother from Kentucky,” Abu Ali said.

“I discovered my unique passion towards comedy at a young age, And over the years, my dedication and love for this craft is what i believe distinguishes me from the rest. I am is best known for my unique way of combining jokes with my real life events in an amusing way that always leave my spectators laughing.”

Abu Ali says he tries to reflect a comedy style of “raw energy” when he performs. And he is not afraid to take on taboo topics often frowned upon among certain conservative segments of the Arab American community.

“My innovative style, raw energy and distinctive voice, gives fans what they want in a comedy show, regardless of what others think, especially in the Arab culture where some words or subjects are considered taboo or forbidden to speak about. In 2018, I have already gained more than 20 million views on my social media platforms,” Abu Ali explained.

But comedy and humor are powerful ways to confront stereotypes, he said.

“The old adage that laughter is the best medicine has been well-proven throughout time–there have even been scientific studies to back up the claim. Comedy is not only a relief in tough times, but it’s also an effective way to get one’s point across in a way that is both fun and informative,” Abu Ali said.

Abu Ali said growing up with a Palestinian father and American mother from Kentucky created an interesting background to his youth, exposing him to different cultures and traditions which helped him develop his unique voice and style of standup comedy performance.

Talking about his life growing up, Abu Ali says, “We would often visit our family in Palestine and travel the Middle East and also visit our Mother’s side of the family in the country. It almost feels like you are living a double life where one side of your family all voted for Trump while the other just got banned from entering the country.”

His big breakthrough came at the age of 25 when he took the advice of friends and family and started doing stand-up comedy. There he found that he truly had a talent for it and has not stopped making audiences laugh since then.

Abu Ali  told Palestine in America (PiA) online, “When I finally did it, I felt very comfortable on stage. You either have it or you don’t and you won’t know unless you try.” PiA sat down with Abu Ali to discuss how he uses his comedic talent to share ideas and spark conversations.

He says that in addition to making audiences laugh and new entertained, he hope that his performance and humor “help make a difference” to make a better world.

Click here to get more information on his comedy performances, and view some of his comedy clips, or look Abu Ali up on Facebook at Abu Ali Comedy. 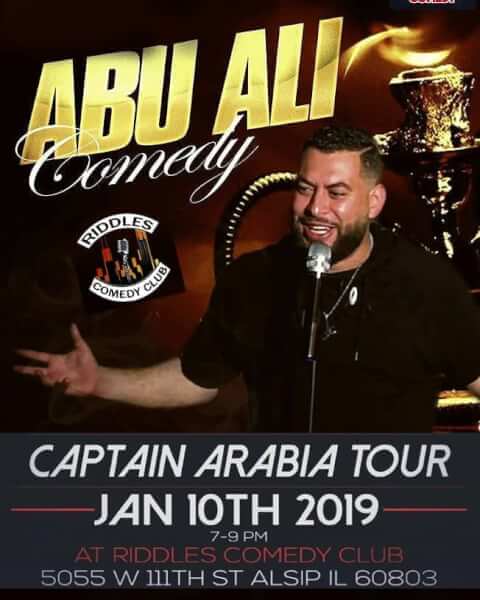