On the 32ndanniversary of his kidnapping, Israel’s nuclear whistle blower Mordechai Vanunu tweeted the image of his inked palm, which led to exposing the Mossad agent who facilitated Vanunu’s kidnapping.

The Center for Israel Education’s “This week in Israeli history” spun Vanunu’s kidnapping as a “return.” 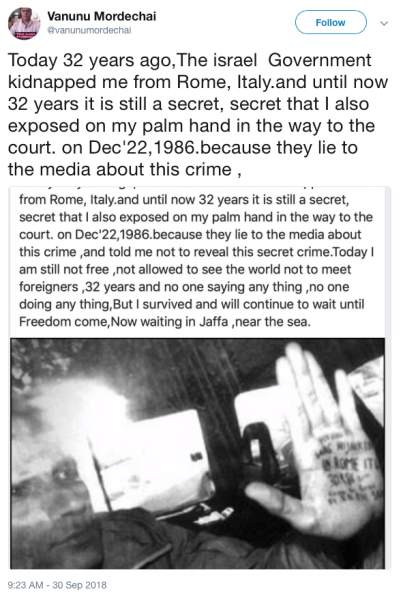 The Center for Israel’s Education website “This week in Israel history” page states:

Sept. 30, 1986: Vanunu Returns: Mordechai Vanunu, a nuclear technician who left Israel in 1985 and leaked details about the country’s nuclear program and the reactor at Dimona, is brought back to Israel to face trial for espionage after being lured from London to Italy by an undercover Mossad agent. He is convicted in 1988 and serves 16 years in prison.

It was 18 years behind bars. On 21 April 2004, Vanunu was released from jail and has lived in Jerusalem, Tel Aviv, and Jaffa under draconian restrictions including he not speak to foreigners. In 2015, the then 60 year old Vanunu wed for the first time to a Norwegian professor and has been granted asylum.

When Vanunu shared his photos from Top-secret locations within the Dimona nuclear facility and told everything he knew as a mid-level technician on the night shift to London’s SUNDAY TIMES; security for Israel’s nuclear reactor was the responsibility of the Shin Bet, the Mossad and a “steering committee.”

…What was called the “prime ministers’ club”… decided the authenticity of the information on Vanunu should be checked, that Vanunu should be tracked down, and that an effort should be made to prevent him from disclosing information. This assignment was given mostly to the Mossad, since it is responsible for secret missions outside the country’s borders…

By studying passenger lists and border crossing information, security officials concluded that Vanunu was in London. A number of consultations were held: officials decided that if Vanunu were found in London, and if there were a need to bring him to Israel against his will, the kidnapping would not be done on British soil… the Mossad decided not to conduct a kidnap operation on British soil, and Shimon Peres welcomed this position due to his desire to avoid another embarrassing entanglement with the “iron lady,” prime minister Margaret Thatcher.

A Mossad team, including Cheryl Bentov, nicknamed “Cindy,” after her brother’s girlfriend (and today his wife), combed through London. With the help of information culled from various sources, the Mossad managed to track down Vanunu. It identified his hotel and kept tabs on his contacts with the Sunday Times.

In Tel Aviv, Shimon Peres was at this point alarmed by the prospect of public disclosure about his “baby” – the Dimona reactor. He convened a meeting of the newspaper editors committee and in an off-the-record talk implored them not to print reports based on stories in the international press about the Dimona plant…

Introduction to the SCREENPLAY:

UNCENSORED “30 Minutes with Vanunu“ was created because The Media failed to report on Israel’s WMD and Vanunu’s human rights struggle.

Why is my TV clogged with election Ads? Commentary