On September 11, “Fear: Trump in the White House” will be released to the public who can already read many damning and depressing details at The Washington Post and New York Times.

One of POTUS Trump’s many twitter responses was but one word: “Treason?”

Treason is a betrayal of trust or “the offense of attempting by overt acts to overthrow the government of the state to which the offender owes allegiance or to kill or personally injure the sovereign or the sovereign’s family.”

This reporter will focus on “the betrayal of a trust” issue vis-a-vis the Mainstreams Media’s response to the events of September 11, 2001 because the MEDIA failed to ask hard questions but took down dictation from fear-filled politicians who were willing to cast blame without any apparent reflection of their complicity.

However it was President George W. Bush’s first televised address to Americans when he told us if we wanted to help we should“GO SHOP!” and that “They hated us because we were free” that inspired this American to research, join a peace building organization, travel and write about my gut wrenching experiences from both sides of Israel’s Wall in Palestine. As I reflected on the events of the last few days I recalled my evening with Helen Thomas.

In this YouTube Helen Thomas tested Obama’s “credibility” regarding Middle East nuclear weapons but he blew her off claiming he didn’t want to “speculate” while her ‘peers’ remained mute regarding USA-Israeli nuclear deceptions:

I asked Ms. Thomas what she thought of reporters who fail to follow the facts and Helen replied, “They have no conscience.”

Others claim the media’s lack of integrity borders on treason!

I was not a reporter when I met Israel’s nuclear whistleblower Mordechai Vanunu for the first time in June 2005, but I became one because Vanunu told me:

I also asked Ms. Thomas what she would advise anyone who wanted to go into the field of journalism and she encouraged:

Go for it! It’s the greatest profession in the world because you are always learning and you are aware of the world, so you just might be able to affect change.

You cannot have a democracy without an informed people.

Information is everything; it enlarges your intellect and that guides you.

The job is to follow the truth and report where it leads you!

Right and wrong is not relative. Empathy is fine but kindness and sympathy do not change the facts and conscience is everything! Leaders are suppose to do the right thing and we should back up the president when he does the right thing; but drop him when he doesn’t.

The WHY is the most important question-not that something happened- but WHY did it happen?

Somewhere along the way America lost its soul. People have to rise up but Americans have become so passive and power overwhelmingly abusive.

I asked, “So how do we fix this situation?”

Then I asked Ms. Thomas if she had always wanted to be a journalist and her persistent smile broadened and the gleam in her eyes sparkled with unshed tears as she replied, “When my first article was published in the high school paper and I saw my byline, I was hooked!”

I shot back, “I had a similar but opposite experience!”

I explained that when I was a child, my dream was to grow up and become a Brenda Starr, the red headed, ace investigative journalist and star reporter for the metropolitan daily, The Flash. The fictional Brenda traveled the world solving mysteries and unearthing scoops and she intuitively knew when somebody was not telling the truth.

But when my first assignment for the high school newspaper was edited beyond my recognition but my name was attached, my Irish temper erupted and I immediately confronted the faculty member on the paper and inquired, “Why did you publish an article with my name but with words I did NOT write?”

I was told that it was just standard procedure for the faculty to edit all of the student’s work and I replied, “Not mine you don’t! I quit!”

Ms. Thomas pointed her finger at me and said, “That’s ethics!”

Ethics are moral principles that govern a person’s behavior and activity.

To the senior official in the Trump administration who wrote the anonymous Oped published on Sept 5, by The New York Times,“I Am Part of the Resistance Inside the Trump Administration”, this reporter replies “quiet resistance” is no different than “silent support” because both lack the ethical integrity to visibly stand up and by one’s own words.

Despite the fact that in 2015, Mordechai Vanunu “fired” me as a supporter and “dismissed” and disrespected me as a reporter, I continue to honor my vow to write the Vanunu saga UNTIL Israel allows their nuclear whistle blower his right to fade into the world instead of having to report on Vanunu’s ‘struggle’ to leave Israel, which he must tweet about because The Media continues to fail to report on Israel’s nuclear weapons. 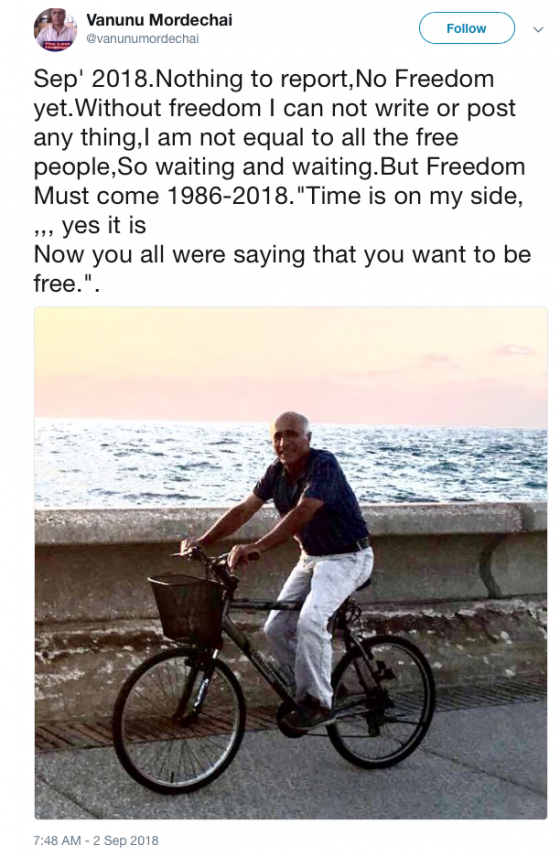 British court ruling: only justice for Arabs is through violence Arab World