Palestinians should reject rejectionism and get out of the way of the Trump train wreck that promises to achieve little except open the door to more dramatic and widespread changes. The Arab World’s and Palestinian strategies of rejectionism has led us to this place of failure. We weren’t brought there by President Trump, Israel or even the Saudis. Instead of fighting against this slide downward, Palestinians and Arabs who seek peace should step out of the way of this train wreck and let it happen. Once Palestine and Middle East peace hits rock bottom, the region will disrupt in total disarray. Then, we can pick up the pieces in an era of a new start

Years ago, the Arab World was defined by one agenda, Palestine. Every leader, either honestly, or dishonestly, focused their rhetoric on the significance of freeing Palestine from the grip of the Israeli occupation.

Israel was never seen as a partner in the evolving regional politics, economic renewal or social reforms. It was always the sinister force that the Arab World used to distract its people away from their own leadership incompetence.

That has changed, although not for the better.

Israel now secretly deals with several Arab countries and has consumed almost all of Palestine, including overseeing the virtual destruction of the Arab and Muslim dominion over the Jerusalem Holy Sites.

Muslims and Christians can continue to look towards the Al-Aqsa Mosque and the Church of the Holy Sepulchre, two of several Muslim and Christian holy sites, but that’s not really the reality. No matter what the rhetoric used to disguise the collapse of Arab and Muslims influence in the religious icons, the Arab and Muslim influences over these and other Holy Land religious sites is all but erased.

The Arabs have no oversight of any Christian or Muslim holy sites, just a moral leverage that today is so weakened one could ask if it even exists anymore.

Israel is no longer the Arab or Muslim World’s priority, the result of 70 years of several, not just one, catastrophes, the vaporization of regional political leadership eroded by continued failure, and the intentional altering of the region’s priority.

Today, the greater threat to the Arab and Muslim World, according to the leadership, is not Israel. It is Iran and Iran’s jurisdiction over a growing network of extreme religious and social dogma.

Unfortunately, the mistake being made by the leadership is that while Iran is truly one of the region’s greatest threats, Israel remains a continued threat to the core affairs of the movement for Arab nationalism and continued Islamic pride.

Iran and Israel continue to be threats. Any effort to confront one without the other will only undermine any small gains that might be achieved. 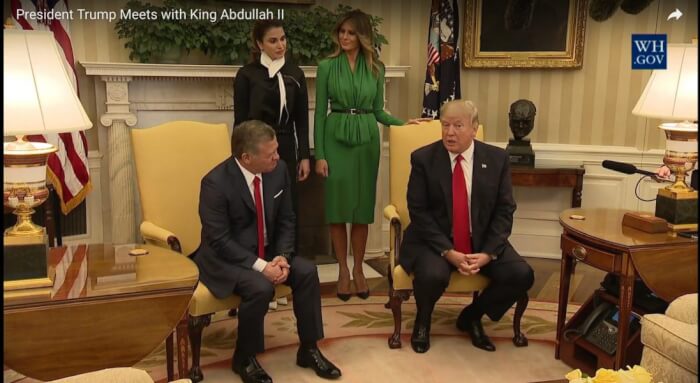 Already, we see that Israel is being pushed aside from the Arab and Muslim World’s lexicon of concerns, replaced by Iran.

The Palestinian peace plan being pushed by President Trump only exists because it has the backing of the anti-Iran forces led by Saudi Arabia. The plan has yet to be released, but according to leaked reports mainly in the Israeli media, it will scrap the 2002 Arab League plan that Saudi Arabia once championed, replaced by a dramatically pared down plan that will throw money into the Israeli besieged Gaza Strip while taking the legs out from under any national aspirations in the West Bank for Palestinians.

Amazingly, the plan would recognize Israel’s sovereignty not only over Occupied West Jerusalem but also Occupied East Jerusalem – the two sections of the Holy City were taken through military force in violation of international agreements Israel embraced at the United Nations.

Trump’s peace plan apparently surrenders much of the Jordan Valley to Israel, approve of all of the Jewish-only settlements Israel has established in violation of international laws over the years, and recognize a new system of government in which only Jews in Israel would have full rights and non-Jews – Christian Palestinians and Muslim Palestinians – would be imprisoned in a new form of Apartheid.

But the worst change is that Jordan, which for years has been the primary obstacle to forcing Israel to make the basics concessions to Palestinian rights, will be replaced by Saudi Arabia. Although Jordan’s monarchs have spent decades backstabbing the Palestinian national movement holding secret talks with Israel’s leaders and surrendering over issues of nationalism in order to be given the nominal recognition as being the custodians of the Jerusalem Holy sites, those betrayals have finally been rewarded. Jordan will be out and Saudi Arabia will take their place as the custodians of the al-Aqsa Mosque, the Dome of the Rock, while the Christian holy sites will be thrown to the curb of an unpaved street of continued suffering.

Why all of this change? So the Arab World can cut the legs out from under Iran.

Iran reigns over a satellite of extremism that includes Syria and Lebanon. Hezbollah is not only an extension of Iranian politics, it is a direct part of Iran’s military strategy in the region. Syrian President Bashar al-Assad only survives today because the growing movement against Iran has outweighed his war crimes and atrocities against civilians. Ironically, by making Iran the region’s primary antagonist, the anti-Iranian forces allowed the more violent extremists, fighters aligned with ISIS, to undermine the moral civil war being waged by rebels seeking freedom and Democracy.

President Trump has consolidated his field of confrontation to focus on Iran, as another short-sighted concession to Israel. And Israel does not want a free Syria. It wants a Syria that remains in the hands of Bashar al-Assad, who in his 30 plus years as president never posed a real threat to Israel’s military domination of the region. Israel doesn’t want the inept and incompetent Assad to be replaced. Israel’s wants Assad to remain in power as Syria’s anemic leader.

Israel can accept Assad’s empty rhetoric. They fear another leader might put punch into that rhetoric and actually do something to recover the Golan Heights, which the Trump administration is planning to formally recognize as a part of Israel, let alone engage in substantive confrontation of Israel in defense of Palestinian rights.

Now, many people may see this analysis as an argument as to why Trump’s peace plan should be rejected. But I disagree.

The truth is that since the passing of President Yasser Arafat, the Palestinians have suffered with poor and dysfunctional leadership that can neither control Hamas nor leverage its righteous moral issues against Israel’s continued atrocities. Saeb Erekat has led the negotiations for nearly three decades, ineptly, arrogantly and incompetently. He knows what to say to explain his failures, but not what needs to be done to correct them.

Mahmoud Abbas is a weak president. Arafat feared the backlash of compromising on the right of return when he was at the table at the only peace deal that might have opened the door to a Two-State Solution and a roadmap to restoration of Palestinian rights, but Abbas is even worse.

Palestine is going to be thrown under the bus soon by the Trump administration and the typical response of rejection and screaming and do-nothing rhetoric will only help make the end result take place faster.

But what foes of the Trump peace plan don’t understand is that given this scenario, the events that follow will so disrupt the region angering Arabs in Jordan, in Egypt, in Lebanon, and in Israel and Palestine itself, that the dynamics will create an environment in which the Trump peace plan not only will fail but the price paid by Israel will be enormous.

It’s amazing how much humiliation the Arab World has been willing to accept at the hands of Israeli hegemony, war crimes and atrocities. The Arabs have responded to this humiliation with empty rhetoric and powerless reaction. They have basically done nothing except become more weakened.

At some point, this Arab World system that accepts humiliation as a price of survival will totally collapse and the region will transform into a powerful force that will throw the Arab and Muslim World into total disarray.

Iran will become more empowered. The Palestinian cause will return to the center of the focus on Israel. Israel’s confidence will be broken as its leaders and people are shunned in the region and its secret deals with the Arab states will be shattered. The historical slide into humiliation by the Arab World because of its incompetent Arab leadership will be allowed to hit rock bottom and stop. And this will allow the region to begin anew with a more successful campaign to expose and check Israel’s flagrant human rights violations, and a more successful effort to re-establish Palestinian rights.

President Trump has one character that should not be forgotten. His erratic shoot-from-the-hip policies make him an unstable and unpredictable government leader. He has already shown that he betrays his allies. Look what he is doing in Europe, NATO and other regions.

He will do the same to Israel. But not if the Arabs do what they always do when faced with pathetic and weak peace plans intended to strengthen Israel. If the Arabs enter into the process replacing rejection as their only strategy and instead define a clear agenda for peace, they will allow Trump and Israel to implode.

Rather than reject this latest round of inadequate peace gestures from Israel and Trump, embraced by a coniving Arab and Muslim world, Palestinians should welcome it and see it for what it really is, their first opportunity to step aside out of the way of a train wreck that will bring the peace process to its lowest point in history and allow for a revival under new terms that respects Palestinian justice.

(Ray Hanania is an award-winning Palestinian American syndicated columnist and author. Reach him at his website www.Hanania.com or by email at rghanania@gmail.com.)