Ron Grantski became internationally known for being Laci Peterson’s step-father who testified at the 2004 blockbuster trial of Laci’s husband, Scott Peterson, who was found guilty of her murder and their unborn child.

In 1967 Grantski became a survivor of Israel’s June 8 attack on the USS Liberty. On Sunday Grantski died at home in his sleep.

In 1967, Ron Grantski was a US Navy intelligence technician onboard the USS Liberty, which was ferociously attacked by Israeli war planes and torpedo boats while navigating in international waters during The Six-Day War.

I had intercepted a message the Israelis were going to attack (a U.S.) base and blame it on the Arabs, or implied so. Unbeknownst to us, it was our ship that was going to be attacked

Grantski’s hands were burned from napalm and shrapnel pierced his buttocks for which he received a Purple Heart. Grantski recalled the torpedo boats that fired five torpedoes but only one hit blowing a huge hole in the side killing twenty-five American service men, “I was down there on my first cruise. If I had still been down there, I’d have been dead. The captain (William L. McGonagle) was wounded. He ran the ship on his back, with an aide holding a megaphone so he could give orders… He said, ‘Gentlemen get to your battle stations. We are not abandoning ship’.”

Jardine concluded that Grantski and others believe the Israeli attack on the USS Liberty was intentional and that the Johnson administration ordered the cover-up.

Grantski’s health prevented him from attending the 50thUSS Liberty Association’s commemorative reunion at Arlington Cemetery and Norfolk, Va., but this American attended and produced We Americans and The USS Liberty

Jardine concluded his article by quoting Grantski, “It’s important that the true story comes out.”

More on that story is coming out thanks to Grantski’s friend and shipmate Donald Pageler’s USS Liberty LOVE Story for which Pageler wrote regarding this photo: 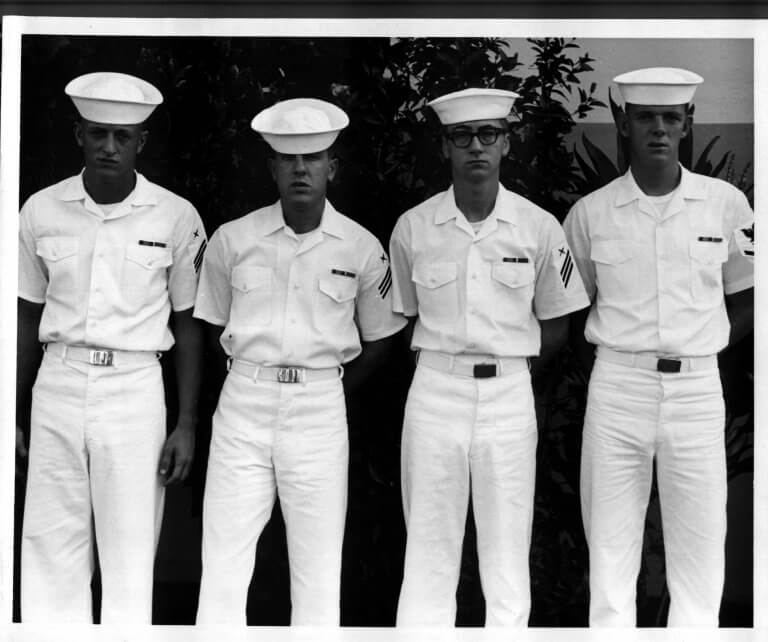 “Four of us were sent to Hawaii after Israel’s attack on the Liberty. From left to right is myself, Ron Grantski, Ken Ecker, and Ron Buck. Grantski lives in Modesto and I saw him last Christmas. Ecker lives in Ill. He and I were in CT school together before the Liberty. Ron Buck was thought of as a mentor. He lives in Redding, CA. and hasn’t as yet attended a Liberty reunion.”