The Holy Land Christian Ecumenical Foundation (HCEF) is organizing for another of its successful annual program bringing Diaspora Palestinians to Palestine for a month-long schedule of education, travel, fun and conferences July 8 through July 23.

The program is called Know Thy Heritage program which empowers Palestinian youth in the Diaspora by strengthening their knowledge of their Palestinian identity, culture, history, traditions, as well as their understanding of the Palestinian economic environment, political landscape, social structures and conditions. “Explore & Live Palestine” provides these youth with the tools and skills necessary to be in continuous connection to their roots, heritage and Homeland.

Anyone can apply by visiting this website: www.kthps.org/join. You can fill out the form online.

The program is for youth of Palestinian descent holding citizenship from any nation in the Americas, Europe, and Australia/New Zealand. We will also consider those from the Middle East who have proof of a visa from Israeli authorities to travel the country. This proof must be sent to kth@hcef.org before we can process the request. We also do NOT accept requests from youth currently living in Palestine since this is a program for reconnecting Palestinian youth of the Diaspora with their homeland and its people, their fellow Palestinians.

The Know Thy Heritage program is one of the most important programs to strengthen the diaspora’s understanding of Palestine and reinforcing their commitment to advocate for Palestinian rights and justice. While at the HCEF conference a few years ago, participants of the Know Thy Heritage trips told me that they learned so much during the trips and it energized their activism to help Americans understand the true issues as they apply to Palestine.

Those who are too old to participate but who have been successful in business and professional life should also explore the possibility of sponsoring and supporting the trip. It is so valuable and your donations to the HCEF would go a long way to help strengthen a better understanding of Palestine.

Don’t we all need that?

Here’s the HCEF report from the 2015 program:

Like past delegations, the youth participants of this year’s KTH program entered Palestine through the King Hussein/Allenby bridge crossing. Despite several hours of waiting and a series of interrogations, the delegates were able to cross the bridge safely, knowing full well that their struggle at the bridge was merely a taste of the harrowing experiences their fellow Palestinians must endure each and everyday. The frustration these delegates felt on the bridge, however, was soon replaced with elation as they made their way to their first stop: Jericho.

Known as the “Gate to Palestine” and the city of the moon, Jericho is the oldest city in the world and the first destination for the delegates upon their long-awaited arrival to Palestine. They were met with a warm welcome at the State of Palestine Border & Passage General Department by Jericho’s Governor H.E. Majed Al-Fitiani, the Mayor Mohamad Jalaita, and the local youth council. 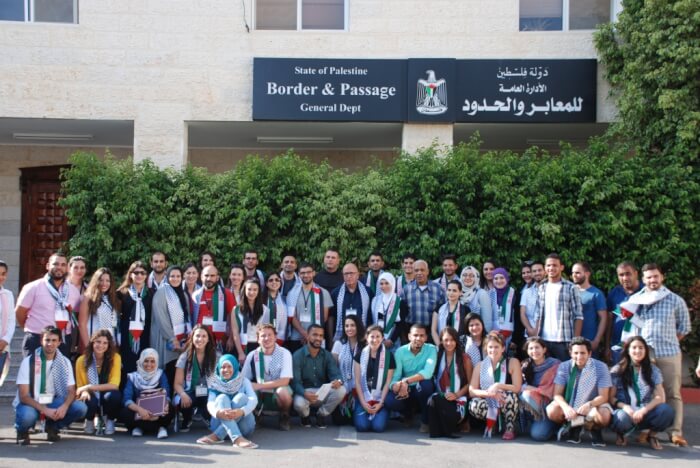 After their time in the Jericho, the delegates set out to Bethlehem, where they were met with a stirring welcoming ceremony organized by the people of the city to formally greet the delegation to Palestine. 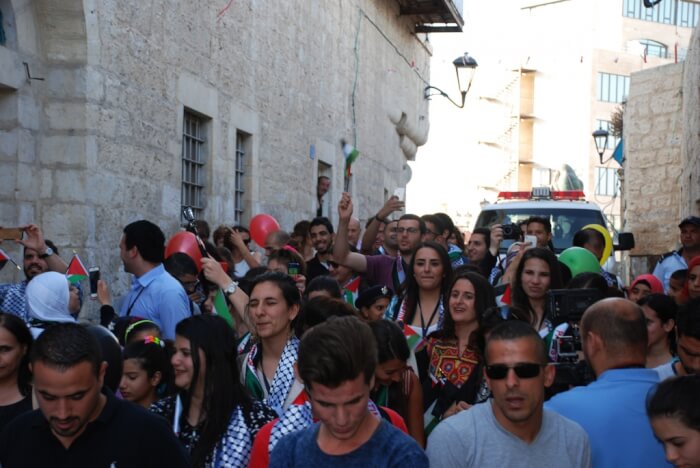 Hundreds were in attendance, including the Salesian scout troupe and marching band, which added a joyful note to the celebrations. The parade was also joined by members of the Palestine’s local youth councils, who have served as long-time partners of the KTH leadership program. The event was also made particularly special by the attendance of the orphans of the SOS Children’s Villages Palestine, who helped receive the delegates and guide them throughout the procession of the parade. Just as these young orphans were reminded that they were not forgotten by the diaspora, the delegates were moved by the experience of walking hand in hand with their young Palestinian brothers and sisters. 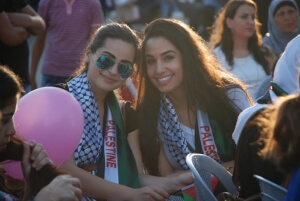 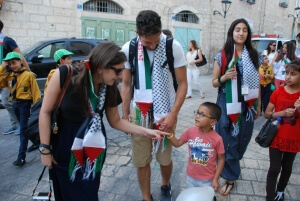 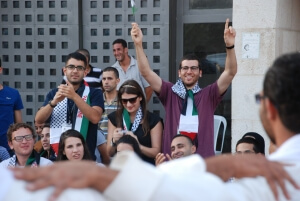 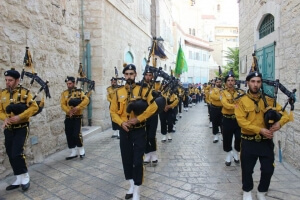 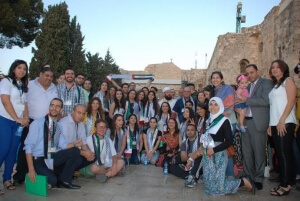 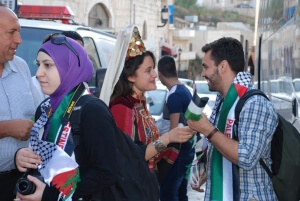 Coincidentally, the parade also fell on the Palestinian National Dress Day. Therefore the delegates had the privilege of being received by Palestinian women showcasing their beautiful traditional embroideries. 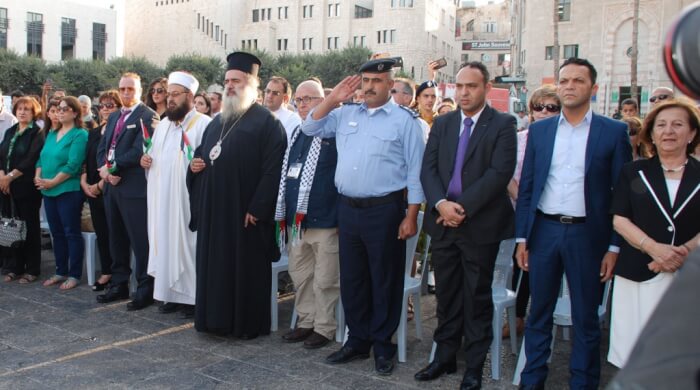 Bethlehem Youth Council President Elias Nassar delivered welcoming remarks, in which he told the delegates, “In addition to welcoming you to Bethlehem, we are here today to welcome you home to Palestine: the Holy Land, the land where your parents, grandparents and ancestors lived and walked. We welcome you to Bethlehem, the city of peace and coexistence and the city where Jesus Christ was born, sending the whole world a message of love and peace.”

Sir Rateb Y. Rabie said in his remarks, “After eight hours of agony and hardship traveling from Amman to Bethlehem, this warm welcome makes me feel happy, joyful and really at home — that I’m a host, not a guest. 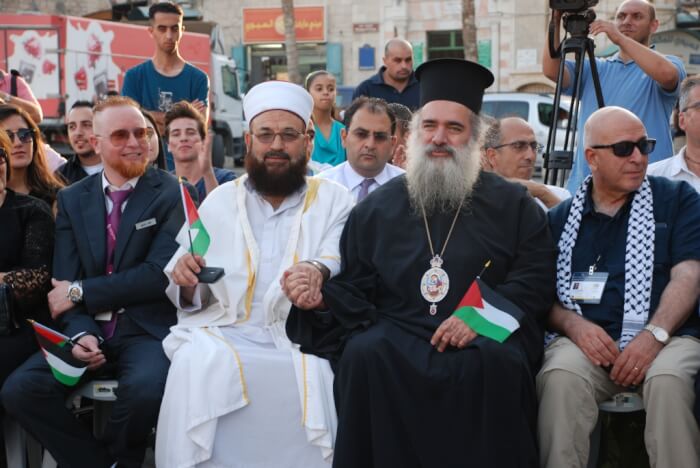 The delegation was also welcomed by Archbishop of Sebastia and HCEF Advisory Board Member Atallah Hanna and Bethlehem Mufti HG Sheikh Abdul Majid Atta. Both leaders raised the Palestinians as a model of interfaith coexistence for the world, confirming that the Palestinian people are one nation, regardless of their beliefs.

As participants of the 2015 KTH program, these delegates will spend the next two weeks having the fruitful and challenging experience of fostering a deep relationship with their ancestral homeland. This will include taking part in the 4th Annual Diaspora Youth Conference, which will take place July 31-August 1, 2015 at the Convention Palace in Bethlehem. The conference will include workshops and lectures to introduce youth attendees to the political, social, cultural and economic situation in Palestine, as well as give Palestinian youth leaders the opportunity to exchange experiences and ideas in order to create a space for innovation and mutual cooperation aimed at serving Palestine and its people. 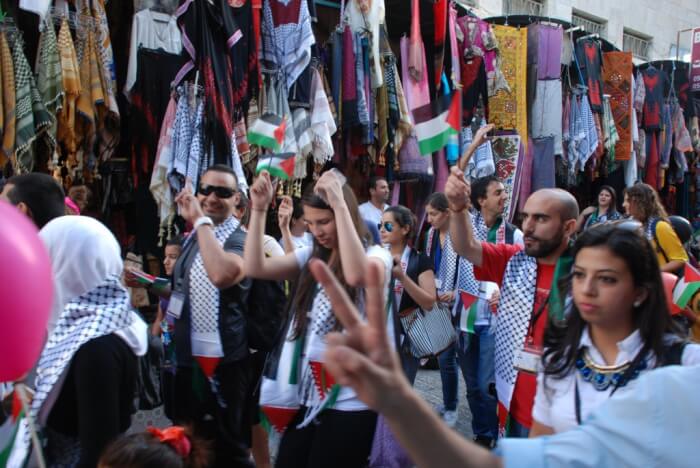 Know Thy Heritage, which launched its first program in the summer of 2011, is a portal through which Palestinian youth in the diaspora can return to Palestine and strengthen their knowledge of both their Palestinian identity as well as Palestine’s economic environment, political landscape, and social structures. For more information about HCEF And its programs, visit our website at HCEF.org. You can also learn more about KTH and follow this year’s delegation on Facebook, Twitter, Instagram and online at kthps.org 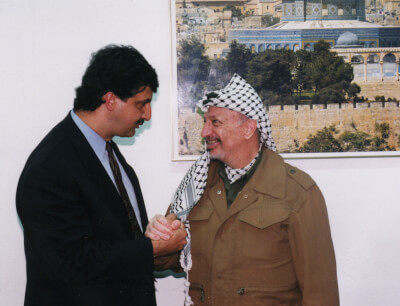