On Monday the Jerusalem Magistrate’s Court gave Israel’s nuclear whistleblower Mordechai Vanunu a two-month suspended jail sentence for violating the draconian restrictions placed upon him on 21 April 2004 when he emerged from 18 yrs. behind bars.

Mordechai Vanunu was also condemned to two more months in prison “if he commits another similar violation [speaking to foreigners] in the next three years. He was also sentenced to 120 hours of community service” The Jerusalem Post reported

Today’s news [July 10, 2017] from Jerusalem regarding Mordechai Vanunu’s ongoing saga coincides with this reporters announcement of a leave of absence from TheArabDailyNews to focus on writing screenplays based on my nine books for a movie and TV series under the title: “This American” 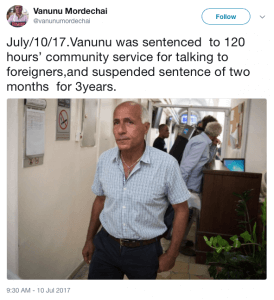 Part One is titled: “This American and Israel’s Nuclear Whistleblower” and was submitted to AmazonStudios last Friday.

TRUE STORY of middle aged American who realizes her childhood dream of being a reporter in 2005, ignited by a serendipitous meeting in Jerusalem with Israel’s Nuclear Whistleblower who had been freed from 18 yrs behind bars to open air captivity under draconian restrictions on 21 April 2004.

Since meeting Mordechai Vanunu in 2005, this American has published thousands of online articles, 9 books, ran for US HOUSE in 2012 and became an Honorary Crew-member of the USS Liberty on 8 June 2017.

Mordechai Vanunu has stated he “wastes time waiting” to leave Israel ever since his release from 18 years behind bars on 21 April 2004.

In 2015, the 60 yr. old Vanunu wed for the first time to a Norwegian Professor who has filed all the paperwork for Vanunu’s asylum, which has been approved. However, Israel continues to deny Vanunu the right to join his wife in Oslo.

Our film begins in a darkened movie theater and we hear Doris Day singing, “Whatever Will Be, Will Be (Que Sera, Sera)” [from the movie THE MAN WHO KNEW TOO MUCH] over the Credits.

As the theater lights come up the camera is focused on the eyes of Mordechai Vanunu, at 8 years old. He is the last to exit the theater that opens onto the same street where a man is stabbed in Marrakesh at the beginning of THE MAN WHO KNEW TOO MUCH.

Mordechai/Morde Vanunu walks in silence to his home: a better than average dwelling in Morocco for his father owns a thriving general store and his mother is a professional seamstress. After ritual prayers the father tells the six siblings the family is moving to the “land of milk and honey.”

Morde is traumatized from the swift uprooting, harrowing journey and being banished to Beersheba despite his parent’s fervent requests to settle in Nazareth where their relatives had been assigned.

Vanunu suffers his first crisis of faith and alienation from God and society simultaneously.

At the same time America is in mourning over the assassination of President John F. Kennedy.

Our American protagonist is nine years old and she learned to read at five entranced by the Sunday Comic strip “BRENDA STARR, REPORTER.” 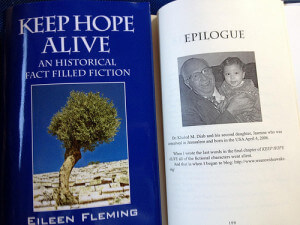