The President of the USS Liberty Veterans Association and others invite POTUS Donald J. Trump, Congressional Reps, The New York Times and YOU to recognize June 8 as USS Liberty Remembrance Day

Because “It’s important that the true story comes out” Mr. Grantski granted an interview to journalist Jeff Jardine of the Modsto Bee who wrote:

In 1982, after the first reunion of the USS Liberty Veterans Association, Ron Grantski returned to his Modesto home and flipped on the phone’s message recorder.

Several played, and then this one: “You’d better stop talking about the USS Liberty and Israel,” Grantski recalls the voice saying. “Something will happen to you.”

Nothing’s happened. Grantski is still here at 70 years old. He believes the best way he can honor 34 shipmates killed when unmarked Israeli fighter planes and torpedo boats attacked the super-secret spy ship on June 8, 1967, in the Mediterranean Sea is to speak his mind about the attack and the cover-up that followed.

Memorial Day, he said, is as good as any to do so after being told for decades to shut up…. 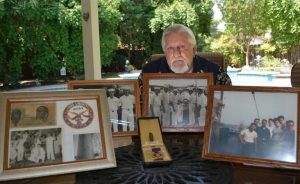 Mr. Grantski recalled that day in infamy when Israel learned they could get away with murdering Americans because President LBJ set the precedent of “not embarrassing an ally” by telling the truth and thus failing the troops and instituting a 50 year case of obstruction of justice.

I had top-secret crypto clearance – the highest you could get. They would change the station in the middle of a message and someone else would say, ‘Ski, he’s on .. ’ whatever station, and I’d switch to that one.

They were using lots of Morse Code, and sending at 50 to 70 words per minute, which is pretty darned fast to be copying in code. I had intercepted a message the Israelis were going to attack (a U.S.) base and blame it on the Arabs, or implied so.

Unbeknownst to us, it was our ship that was going to be attacked.

That message was forwarded as a top-secret communication to the White House.

Mr. Grantski finished his shift and heard the Captain sound the call to general quarters as fighter planes blasted 20 mm cannons spewing napalm all over the USS Liberty.

Napalm ate the flesh on Grantski’s hands and his buttocks were plummeted with shrapnel.

Then the Israeli torpedo boats arrived and Grantski recalled: “The captain had the ship zig-zagging. They fired five torpedoes. One hit…If I had still been down there, I’d have been dead.”

Mr. Grantski concluded, “It was 50 years ago, and its sharp like it was yesterday. It’s important that the true story comes out.” 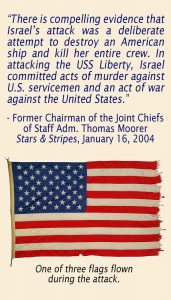 Israel’s attack on the USS Liberty lasted about 80 minutes.

The USA Government Cover-Up and obstruction of justice case has persisted for 50 years.

All evidence points to the Israeli attack on the USS Liberty as intentional.

President Johnson ordered that cover-up and every president since has colluded with it by their SILENCE.

In the era of Trump nothing is certain and so anything is possible and thus Donald J. Trump, congressional reps and The New York Times have been INVITED to the USS LIBERTY Veterans June 8 graveside memorial service.

The following is a screenshot of the letter to POTUS Donald J. Trump from Ernest Gallo current President of the USS Liberty Veterans Association: 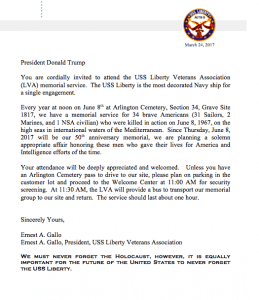 Other than an Auto-Reply from New York Times Editors that this reporters NEWSTIP email was received: SILENCE remains the response from people in power; and thus we raise awareness here:

As a founding member of We Americans and the USS Liberty, I submit my email to POTUS and alert you that President of the USS Liberty Veterans Association, Ernest Gallo has also invited Mr. Trump to the USS LIBERTY’s Arlington Cemetery memorial service at noon on June 8.

Please attend or send a representative to Arlington Cemetery section 34 at noon for the graveside memorial service for the 34 crewmen killed 50 years prior.

Virtually unarmed, the American navy ship was attacked by Israeli planes and torpedo boats on June 8, 1967 leaving 34 US Sailors and Marines dead and 174 more wounded.

The attack on the USS LIBERTY has never received a full investigation as required by law.

The Independent Commission of Inquiry concluded that there was compelling evidence that Israel’s attack on LIBERTY was deliberate and “Israel committed acts of murder against American servicemen and an act of war against the United States” which the LBJ Administration covered up.

Please understand the issue is a USA Government Cover-Up and obstruction of justice!

I will be attending the graveside memorial service at Arlington and through June 11, I will be in Norfolk, VA. at the USS Liberty reunion but spending most of my time on the Riverwalk with paper copies of this petition which We Americans began collecting in Deland, Fl.

On June 8 in Deland, Florida Phil Restino a founding member of We Americans and the USS Liberty is hosting a USS LIBERTY Day event and can be reached at…### 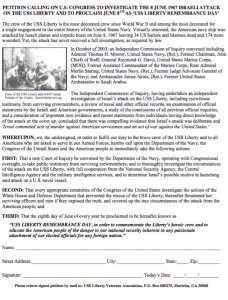 On May 24, I followed up with an email to the same NYT Editors:

The following USS LIBERTY crewmen are available for interviews and all intend to be at the 50th Liberty Reunion in Norfolk, VA

The crew of the USS LIBERTY will never ever forget that day in infamy that set the precedent of a 50 yr. USA Govt. Cover-Up, an obstruction of justice case and a treasonous failure to support the troops.

We Americans are dedicated to ending that cover-up which has steered American Middle East policies into ideologies that are NOT in the best interests of America.

We The People of USA Palestine Israel American Arabs

Hoda Kotb named among Women of Influence for 2014 American Arabs