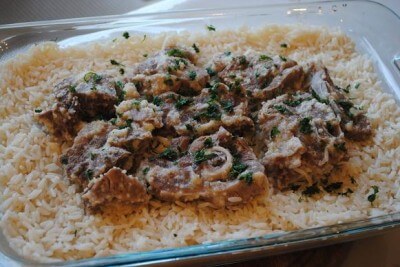 Jareesh (sometimes referred to as Jareesha) is amazing in its simplicity; with just a few ingredients you can enjoy a ridiculous rich taste and a meal large enough to feed a village. It’s easy to prepare, but like many Arab dishes requires a bit of time and Tender Love and Care.

Jareesh could refer to a whole wheat berry and/or to a customary dish made using the crushed wheat. In some parts of the Middle East, Jareesh would be reserved for festive occasions and special gathering such as engagements and weddings.

The meal would be traditionally prepared outside over stone ovens and one person, usually a male, would be the caretaker. That person would then sit and stir, since the Jareesh would require constant attention, dedication and a bit of strength. 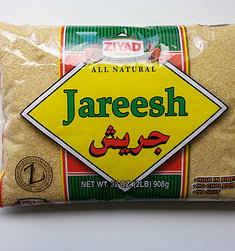 In this recipe, tender pieces of lamb are gently boiled producing a rich and lightly seasoned broth. Ziyad’s Jareesh is then slowly stirred into the stock, combined and then creamed together forming a porridge-like state. (Originally, this dish would require a longer cooking process, since the Jareesh/crushed wheat would need to be blended very well with the other ingredients, however, Ziyad’s Jareesh is finely crushed and calls for less boiling time).

To serve, the Jareesh mixture is poured onto a large serving tray. It is then layered with the cooked rice of choice (Ziyad’s Chef Premium Rice could be used to add an even creamier texture) and topped with the juicy pieces of lamb and garnished with fried onions or fresh parsley. The few ingredients equal a comforting meal to be enjoyed any time of year.

A variety of recipes could be found throughout the Middle East, but always contained the crushed wheat. Since, the main ingredient being wheat, Jareesh is quite filling. It’s said to be popular among Arab tables in the Gulf countries such as Saudi Arabia and the Emirates. Enjoy in great health!

2 lbs of lamb (cleaned and cut into 1 inch pieces)

Salt and pepper to taste

How to prepare recipe 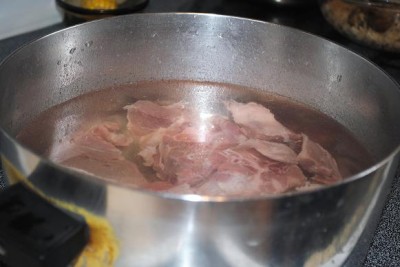 Begin by placing the cut pieces of lamb into a large saucepan and add the 8 cups of water, season with salt and pepper. Bring to a boil and continue to cook over medium-high heat. Meanwhile, carefully watch the water level (avoiding it from getting to low) while cooking remove the foam from top of broth and discard. After a half an hour, add about 2 more cups of water, continue to cook.

Cook rice according to your normal method. Cover and set to the side.

After an hour of time has elapsed and a rich broth is formed, you can do one of the two options: Remove the pieces of lamb from the broth and set to the side or keep the pieces of lamb in the broth, both of which are fine but depends on your preference.

Then slowly stir in a cup of Ziyad’s Jareesh. Continue to mix together until the broth and Jareesh is creamed together evenly about another 15 minutes.

Remove the pieces of lamb (if you haven’t yet) and set to the side.

In a 9X13 casserole dish or large serving tray, pour in the Jareesh mixture. For the next layer, add the rice and spread evenly. Then place the pieces of lamb on top. Garnish with parsley*

(Nijma Darwish is an Ohio based freelance writer, photographer and food enthusiast. You can reach her at nijmadarwish.com or follow her on Twitter @BrnAndBread.)