The Night Before Christmas

T’was the night before Christmas,

He lived all alone,

In a one bedroom house,

Made of plaster and stone.

I had come down the chimney,

With presents to give,

And to see just who,

In this home did live.

I looked all about,

A strange sight I did see,

No tinsel, no presents,

Not even a tree.

No stocking by the mantle,

On the wall hung pictures,

With medals and badges,

Awards of all kinds,

Came through my mind.

For this house was different,

It was dark and dreary,

I found the home of a soldier,

Once I could see clearly.

Curled up on the floor,

In this one bedroom home.

The face was so gentle,

The room in such disorder,

Not how I pictured,

Was this the hero,

Of whom I’d just read?

Curled up on a poncho,

The floor for a bed?

I realized the families,

That I saw this night,

Owed their lives to these soldiers,

Who were willing to fight.

Soon round the world,

The children would play,

And grownups would celebrate,

They all enjoyed freedom,

Each month of the year,

Because of the soldiers,

How many lay alone,

On a cold Christmas Eve,

In a land far from home.

A tear to my eye,

I dropped to my knees,

And started to cry.

And I heard a rough voice,

This life is my choice.

I fight for freedom, I don’t ask for more,

My life is my God,

My country, my corps.’

The soldier rolled over,

And drifted to sleep,

I couldn’t control it,

I continued to weep.

I kept watch for hours,

So silent and still,

And we both shivered,

From the cold night’s chill.

I didn’t want to leave,

On that cold, dark night,

This guardian of honor,

So willing to fight.

Then the soldier rolled over,

With a voice, soft and pure,

It’s Christmas Day, all is secure.’

One look at my watch,

And I knew he was right,

And to all a good night.’ 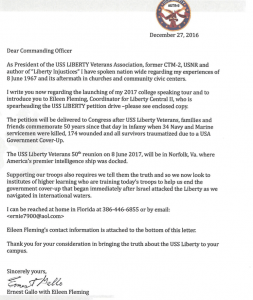 As President of the USS LIBERTY Veterans Association, former CTM-2, USNR and author of “Liberty Injustices” I have spoken nation wide regarding my experiences of 8 June 1967 and its aftermath in churches and community civic centers.

I write you now regarding the launching of my 2017 college speaking tour and to introduce you to Eileen Fleming, Coordinator for Liberty Central II, who is spearheading the USS LIBERTY petition drive –please see enclosed copy.

The petition will be delivered to Congress after USS Liberty Veterans, families and friends commemorate 50 years since that day in infamy when 34 Navy and Marine servicemen were killed, 174 wounded and all survivors traumatized due to a USA Government Cover-Up.

The USS Liberty Veterans 50th reunion on 8 June 2017, will be in Norfolk, Va. where America’s premier intelligence ship was docked.

Supporting our troops also requires we tell them the truth and so we now look to institutes of higher learning who are training today’s troops to help us end the government cover-up that began immediately after Israel attacked the Liberty as we navigated in international waters.

Eileen Fleming’s contact information is attached to the bottom of this letter.

Thank you for your consideration in bringing the truth about the USS Liberty to your campus.