Will controversy follow recent sale of Palos Church to Muslims? The southwest suburbs have a history of community opposition to the building of a mosque or Muslim center, reflecting growing racism and discrimination against Muslims nationwide. Have things changed?

More than 15 years ago, tried to purchase the abandoned Reform Church of Palos Heights for $2.1 million, sparking an unforgettable public debate that quickly turned ugly.

In May 2000, city officials held a public hearing on the sale to the Al Salam Mosque Foundation and residents spoke out in fierce opposition.

The church, the Reformed Church of Palos Heights, one of 19 in the southwest suburban Chicagoland community, had been up for sale for 5 years with no other buyers in sight.

I was there when hundreds of residents packed a community center and complained that the mosque would attract terrorists, violence and insult the Christian faith.

The city blocked the sale and offered the buyers $200,000 to go away but Palos Heights Mayor Dean Koldenhoven, who supported the mosque, said the buyout was wrong.

Haters organizing to block another mosque opening in a closed Christian Church they bought on the open market. In Palos Park Here’s the mosque story:ABC (WLS) Channel 7 Chicago

Elected in 1997, Koldenhoven was thrown out of office in April 2001 by angry Palos Heights voters.

Koldenhoven grew-up as a Dutch Protestant living in an Irish-Catholic neighborhood in Chicago where he “learned diversity real quick.” He was a graduate of Chicago Christian High School at 71st and Racine (which later relocated to Palos Heights) and moved to Palos Heights “because of its strong Christian background.” Koldenhoven received the John F. Kennedy Profiles in Courage Award in 2002.

“They just expressed their hatred straight out. They said they didn’t care they didn’t want Muslims in their neighborhood,” Koldenhoven remembered. Koldenhoven said that he was shocked at the anger, especially since there were so many Christian churches in Palos Heights and not one mosque. He also said that so many of the neighbors of the critics were Muslims and “upstanding citizens.” 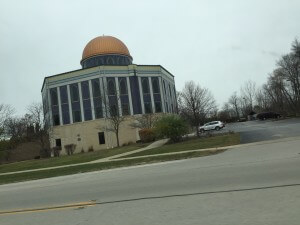 This all happened before the Sept. 11, 2001 terrorist attack that heightened American fears of Muslims and Arabs.

In the days after the terrorist stacks that killed nearly 3,000 Americans, neighbors in Bridgeview gathered to protest against Muslims and Arabs at the Bridgeview Mosque located a few blocks west of 92nd and Harlem Avenue.

Several years later, a similar public outcry occurred when Muslims purchased land at 162nd and 104th Avenue in Orland Park to build a new mosque. Officials in Orland Park held public hearings to allow residents to express their views, but the hearings also turned ugly as many residents opposed to the mosque cried that building the mosque would open the door to Osama Bin Laden “to kill our people.”

The Orland Mosque was build despite the public outcry, which drew more than 600 angry residents at a meeting that I also attended. I produced a documentary on the Orland Mosque controversy.

Anti-Muslim sentiment continues to grow. Wheaton College (of Illinois) recently suspended an African American Christian teacher, Larycia Hawkins, when she put on a Hijab (head covering) and said Christians and Muslims “worship the same God.” Her fate remains uncertain as the school has moved to fire her.

This week, Regional Newspaper Editor Jack Murray got the scoop on the sale of the First Church of Christ, Scientist in Palos Park at 123rd and 80th Avenue to the Muslim American Society.

The property most certainly will be used for some religious activities and probably would have a prayer center, but I was not able to get MAS to respond to my inquiries about what they planned to do with the former church building.

Will there be the same ugly outcry or have we Americans finally learned to be tolerant?

Or, click here to view the Cable TV interview.

Click below to view the documentary on the 2004 Orland Mosque Controversy:

Click here to view Part 1 of “Eyes of the Beholder: The Orland Mosque Controversy.

Click here to view Part 2 of “Eyes of the Beholder: The Orland Mosque Controversy.