On Thursday Mordechai Vanunu’s house arrest in virtual solitary was lifted after 7 days without Internet or phone. Amnesty International’s Middle East and North Africa Programme will “continue to monitor his situation.”

On Thursday The International Atomic Energy Agency’s General Conference voted down a resolution proposed by the Arab nations, which called for international supervision over Israel’s nuclear facilities and for Israel to sign the Nuclear Non-Proliferation Treaty. 61 member countries opposed the proposed resolution, 43 voted for it and 33 abstained.

Those voting against the resolution included the United States, Canada, Australia, New Zealand, Japan, South Korea and all European Union members. Many others abstained, including Brazil and India.

On 10 January 2013, a headline at The Arab Daily News read: Mordechai Vanunu, the Snowden of Israel

Snowden is the best example of what I did 27 years ago – when the government breaks the law and tramples on human rights, people talk. That’s what he did, he speaks for everyone, and that’s what I did – I spoke for everyone.-Vanunu Mordechai, 25 December 2013

Avner Cohen is a Professor of nuclear studies at the Middlebury Institute of International Studies in Monterey, California and the acclaimed author of “Israel and the Bomb.”
In his article for Haaretz, Cohen wrote:

The interview Channel 2 conducted with Mordechai Vanunu earlier this month was fascinating and informative. This was the first time that the Israeli public got a look at the life and the world of the person who in Israel is considered the ultimate traitor.

Up to now, Vanunu had refused to speak to the Israeli public in his own language. Israelis had rejected him, and he rejected them. This interview was also a blatant and defiant violation of the draconian limitations that have been imposed upon him since his 2004 release from prison. 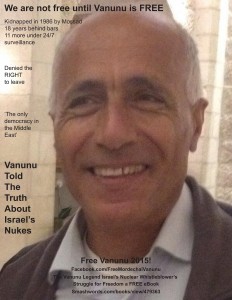 I interject because this reporter has been documenting the Vanunu saga since I met him in 2005, and there has never been any restriction on Vanunu speaking to Israeli Press.

The original restrictions had forbidden Vanunu from speaking to foreigners, and last year Israel even ‘allowed’ Vanunu thirty minutes to speak with foreigners as long as it is not a prearranged meeting!

The ludicrous restrictions could not prevent any of the many UNCENSORED video interviews with Vanunu, which are freely streaming on the WWW.

One of the reasons for taping “30 Minutes with Vanunu” was to document a little of “the life and the world of the person who in Israel is considered the ultimate traitor”;

And all my questions were based on the UN Universal Declaration of Human Rights upon which the Establishment of Israel’s statehood was contingent upon upholding!

Because in the USA, Vanunu remains largely unknown I enshrined everything of importance Vanunu told me about his “life and the world of the person who” thirty-six members of the US House of Representatives signed a letter for in April 1999, calling for his release from prison because they believed “we have a duty to stand up for men and women like Mordechai Vanunu who dare to articulate a brighter vision for humanity.”

My lawyer succeeded to reveal a few very important facts: This General of the Army also was not allowed to see all the secrets that he is required to protect by these restrictions that they claim I know them.

So, he gave orders of restrictions without knowing what he is protecting or that he is also following orders blindly, and Mossad Sheen Bet using its authority for just punishing me.

He testified that it is not a crime for me to talk with foreigners in general anywhere.

He testified that I can speak freely to any Israeli citizens about anything; it is not his concern what I am saying to them. These Israelis can give this information to any foreigners.

It was difficult for the Judge to understand why this dichotomy exits between foreigners and Israelis.

It means that it is not about secrecy but about something else.

A something else is about the money! In 1991, Noam Chomsky wrote:

Israel is the only country in the Mideast with nuclear weapons. But “Israeli nuclear weapons” is a phrase that can’t be written or uttered by an official US government source. That phrase would raise the question of why all aid to Israel is not illegal, since foreign aid legislation from 1977 bars funds to any country that secretly develops nuclear weapons. –“What Uncle Sam Really Wants” p. 65

Cohen continues, True, Vanunu had also violated the restrictions in the past, and was punished for it, but then he did it in a low-profile manner with third-rank foreign media outlets. This time he did it openly and in Hebrew.

This ‘third-rank foreign media outlet’ reporter interjects because Vanunu told me he would not speak to Israeli media because “Israel is only a democracy if you are a Jew.”

But more importantly, on 26 March 2006, just before the taping of what became “30 minutes with Vanunu” he told this ‘third-rank foreign media outlet’:

Many journalists come here to the American Colony, from CNN and NY Times. They all want to cover my story, but their EDITORS say no…

CNN wants to interview me; but they say they can’t do it because they don’t want problems with the Israeli censor. BBC is doing the same thing.

Sixty Minutes from the United States from the beginning they wanted to do a program, but because of the censor situation they decide not to do it. Also big media from Germany, France, Italy, Japan.

None of them wants problems with the Israelis. 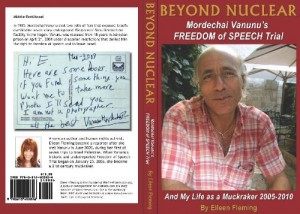 Cohen admits he never “had a serious conversation with” Vanunu yet he accurately concludes:

Vanunu was terribly naïve. While Snowden managed to reveal his secrets to the world and to a certain extent still retain his personal freedom, Vanunu lost his freedom even before his revelations were made public…
Like Snowden, Vanunu was not a spy, but rather someone sounding an alarm…through his revelations, Vanunu betrayed the deepest Israeli conspiracy of silence: the desire not to know what was happening at the secret complex at Dimona…
Vanunu said the following: I was in possession of rare information. I was convinced that it needed to become public, and I had to disclose it to the world because I knew no one else would…

The time has come to leave this brave man alone and let him go where he pleases.

The time has also come for an Americans to take a few seconds and send this message to President Obama:

The United States should not reward Israel with more weapons after Israel and its lobby, AIPAC, attempted to scuttle your administration’s nuclear deal with Iran. The transfer of “massive ordnance penetrators” and other advanced weaponry increases the likelihood of a unilateral Israeli attack against Iran. And a new 10-year deal to provide Israel with up to $45 billion in more US taxpayer-funded weapons will deepen US complicity in Israel’s human rights abuses of Palestinians, in violation of the Arms Export Control and Foreign Assistance Acts. We just avoided a potential war with Iran. Do not give Israel weapons that it can use to start a war with Iran and more weapons to continue oppressing the Palestinians.

The time has also come for Americans to learn about the treasure trove of recently declassified documents regarding Israel’s nuclear weapons.

In the declassified US Army report titled “The Joint Operating Environment 2008” it identifies Israel as a nuclear weapons power and highlights “a growing arc of nuclear powers running from Israel in the west through an emerging Iran to Pakistan, India, and on to China, North Korea, and Russia in the east.”

Governance depends on rule of law– it is imperiled if government openly flouts important laws. It is no longer acceptable for Congress or the President to invoke ‘strategic ambiguity,’ a practice whereby US government officials publicly pretend to the American people that Israel possesses no nuclear weapons.

Jimmy Carter became the first former President to confirm in 2008 that Israel has secretly financed, developed and deployed an undeclared arsenal of nuclear weapons.

The Foreign Assistance Act of 1961 as amended by the Symington Amendment of 1976 and the Glenn Amendment of 1977 prohibit US military assistance to countries that acquire or transfer nuclear reprocessing technology outside of international nonproliferation regimes. Israel, unlike Iran, is not a signatory to the Nuclear Non-Proliferation Treaty…

On 17 September Haaretz reported on Israel’s win at the UN by quoting the losers who also speak for this citizen of the world:

The Qatari envoy, whose country heads the Arab group at the IAEA, presented the resolution proposal titled “Israel’s nuclear capabilities,” calling on Israel to join the Non-Proliferation Treaty and to place its nuclear facilities under UN supervision.

The Syrian envoy said his country is concerned that the international community has done nothing against Israel’s nuclear capabilities, which are expanding daily. Israel cannot be left outside the Non-Proliferation Treaty, and that it must be pressured into acquiescing to the international community’s demand to “dismantle all of its nuclear arsenal.”

I personally talked with more than 30 presidents, prime ministers and foreign ministers. In our conversations I explained that there’s no place for a discussion of this sort while the main problem in the Middle East remains Iran’s attempts to obtain nuclear weapons and its clear declarations of its intent to destroy the State of Israel.

I personally contend every place is a great place to discuss the main problem in the Middle East, which is sustained by USA policies and paid for by American citizens!

“Since the October War in 1973, Washington has provided Israel with a level of support dwarfing the amounts provided to any other state. It has been the largest annual recipient of direct U.S. economic and military assistance since 1976 and the largest total recipient since World War ll. Total direct U.S. aid to Israel amounts to well over $140 billion in 2003 dollars. Israel receives about $3 billion in direct foreign assistance each year, which is roughly one-fifth of America’s entire foreign aid budget. In per capita terms, the United States gives each Israeli a direct subsidy worth about $500 per year. This largesse is especially striking when one realizes that Israel is now a wealthy industrial state with a per capita income roughly equal to South Korea or Spain.”- John J. Mearsheimer and Stephen M. Walt “The Israel Lobby and U.S. Foreign Policy”

During Fiscal Year 2014, the U.S. is providing Israel with at least $10.2 million per day in military aid and $0 in military aid to the Palestinians. (View Sources & More Information)

This Senior Correspondent for a “third-rank foreign media outlet” based in the USA wishes all a good day, good night and good luck!

Will US Campaign to End the Israeli Occupation Respond? American Arabs