I came here today, because I believe from the bottom of my heart that it is vitally important for those of us who hold different views to be able to engage in a civil discourse…

I am motivated by a vision, which exists in all of the great religions, in Christianity, in Judaism, in Islam and Buddhism, and other religions.

And that vision is so beautifully and clearly stated in Matthew 7:12, and it states, “So in everything, do to others what you would have them to do to you, for this sums up the war and the prophets.”

Justice is treating others the way we want to be treated, treating all people, no matter their race, their color, their stature in life, with respect and with dignity…

AGREED and what motivates this public service article seeking to initiate a civil discourse regarding the land where the Bible began, begins with a quote from a Zionist Rabbi:

From Moses to Jeremiah and Isaiah, the Prophets taught…that the Jewish claim on the land of Israel was totally contingent on the moral and spiritual life of the Jews who lived there, and that the land would, as the Torah tells us, ‘vomit you out’ if people did not live according to the highest moral vision of Torah. Over and over again, the Torah repeated its most frequently stated mitzvah [command]:

When you enter your land, do not oppress the stranger; the other, the one who is an outsider of your society, the powerless one and then not only ‘you shall love your neighbor as yourself’ but also ‘you shall love the other.’ -Rabbi Lerner, TIKKUN Magazine, page 35, Sept./Oct. 2007

In my view, there is no justice when, in recent years, we have seen a proliferation of millionaires and billionaires, while at the same time the United States of America has the highest rate of childhood poverty of any major country on Earth…

In my view, there is no justice, and morality suffers when in our wealthy country, millions of children go to bed hungry….

In November 2006, Father Manuel, the parish priest at the Latin Church and school in Gaza wrote:

Gaza cannot sleep! The people are suffering unbelievably. They are hungry, thirsty, have no electricity or clean water. They are suffering constant bombardments and sonic booms from low flying aircraft. They need food: bread and water. Children and babies are hungry…people have no money to buy food. The price of food has doubled and tripled due to the situation.

Without electricity children are afraid. No light at night. No oil or candles…

Many children have been violently thrown from their beds at night from the sonic booms. Many arms and legs have been broken. These planes fly low over Gaza and then reach the speed of sound. This shakes the ground and creates shock waves like an earthquake that causes people to be thrown from their bed. I, myself weigh 120 kilos and was almost thrown from my bed due to the shock wave produced by a low flying jet that made a sonic boom…

Gaza cannot sleep…the cries of hungry children, the sullen faces of broken men and women who are just sitting in their hungry emptiness with no light, no hope, no love.

These actions are War Crimes! 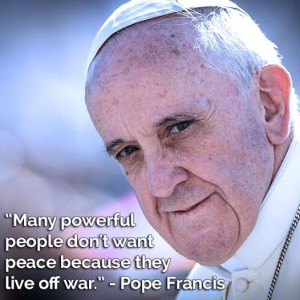 Senator Sanders continues, “I am not a theologian, I am not an expert on the Bible, nor am I a Catholic…But I agree with Pope Francis, who will soon be coming to visit us in the United States and I quote:

The current financial crisis originated in a profound human crisis, the denial of the primacy of the human person.

We have created new idols. The worship of the ancient golden calf has returned in a new and ruthless guise in the idolatry of money and the dictatorship of an impersonal economy lacking a truly human purpose.

Senator Sanders added, “In the pope’s view, and I agree with him, we are living in a nation and in a world, and the Bible speaks to this issue, in a nation and in a world which worships not love of brothers and sisters, not love of the poor and the sick, but worships the acquisition of money and great wealth. I do not believe that is the country we should be living in…” 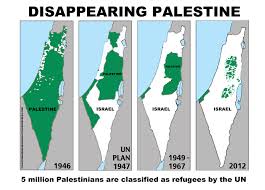 AGREED and all roads do indeed lead to Jerusalem!

Before Dr. Ilan Pappe became a professor with the College of Social Sciences and International Studies at the University of Exeter in the United Kingdom and director of the university’s European Centre for Palestine Studies, I heard him speak in Jerusalem:

The eleven decided to expel one million Palestinians from historical Palestine.

No minutes were taken, but many memoirs were written about that fateful meeting.

A systematic ethnic cleansing of Palestine began and within seven months the Zionists managed to expel one half of all the Palestinian people from their villages and towns.

The New York Times followed Israeli troops and reported the truth of the expulsion and separation of men and women, and of the many massacres.

The world was well informed in 1948, but a year later not a trace was reported in the USA press or books. It was as if nothing ever happened.

From March to October 1948 the USA State Department stated what was happening was a CRIME against humanity and ethnic cleansing.

When ever one ethnic group expels another group they should be treated as War Criminals and the victims should be allowed to return. This is never mentioned in the USA about Palestine.

Israel is so successful in their ethnic cleansing because the world doesn’t care! The ethnic cleansing continues via the apartheid policies of the Israeli government and because of the denial of the truth by the USA media.

To claim Israel is the only democracy in the Middle East is bullshit!

The Six Day War of 1967 escalated the ethnic cleansing and today in Jerusalem every Palestinian who fails to pay taxes, or has a minor infraction will loose their citizenship.

In 1948 the mechanism of denial and ethnic cleansing as an IDEOLOGY, not a policy but a formula began.

When Zionism began in the 19th century it was meant to be a safe haven for Jews and to help redefine Judaism as a national movement, not just a religion. Nothing wrong with either of those goals!

The mind set today is that unless Israel is an exclusive Jewish State, Palestinians will continue to be obstacles. However, there has always been a small vocal minority challenging this.

The only thing that can save Palestinians is for the world to say “ENOUGH is ENOUGH!”

The way to challenge and change the ethnic cleansing is to pursue true democracy and the use of sanctions and divestment, for money talks.

Money is the currency with the loudest voice and what we need are leaders who will address the simple fact that we the people who pay taxes and “The Obama Administration gave Israel $3.1 billion for Fiscal Year 2015 in direct bilateral military aid (also referred to as Foreign Military Financing or FMF). The U.S. government also gave $619.8 million for “joint” U.S.-Israel missile defense programs (designed to protect Israeli territory from potential outside threats), bringing total military aid to Israel to $3.7 billion per year. Put another way, American taxpayers give Israel $10.2 million per day (in 2015).

Senator Sanders concluded “it is imperative that we have the courage to stand with the poor, to stand with working people and when necessary, take on very powerful and wealthy people whose greed, in my view, is doing this country enormous harm.”
I agree and so reiterate that one reason I ran for Congress in 2012 was because I live in a very conservative area but I am liberal;

“If by a liberal you mean someone who looks ahead and not behind, someone who welcomes new ideas without rigid reaction, someone who cares about the welfare of the people — their health, their housing, their schools, their jobs, their civil rights, and their civil liberties, — someone who believes we can break through the stalemate and suspicions that grip us in our policies abroad, if that is what you mean by a liberal, then I’m proud to say I’m a liberal.”- John F. Kennedy 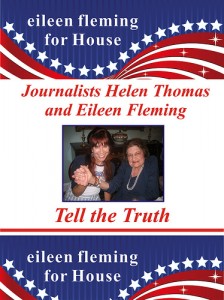 I am also a fiscal conservative, meaning I live within my means.

I know that to whom much is given-much more is required and knowledge brings responsibility.

The ABC affiliate in Orlando, offered all the local 2012 candidates for federal office three minutes of television time.

I used mine to say I would work to end federal regulations on cannabis so as to allow the states the right to legalize [or not] and reap all the profits from cultivation to dissemination of cannabis.

I also said I wanted to establish every June 8th as USS LIBERTY Remembrance Day.

I explained that the LBJ Administration failed to support the USS LIBERTY troops who were attacked by Israel while in international waters during The Six Day War. That day in infamy 34 were killed, over 170 wounded and 48 years later the Liberty Veterans are still calling for to the US Government for justice: an open transparent and thorough investigation to all the events of 8 June 1967, which I claim is the day US policy in the Middle East went from balanced to a pro-Zionist ideology. 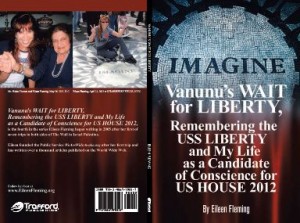 I concluded my three-minutes on TV quoting George Washington’s warning from his farewell address to, “Observe good faith and justice towards all nations; cultivate peace and harmony with all…and passionate attachments for others, should be excluded; and that, in place of them, just and amicable feelings towards all should be cultivated. The nation which indulges towards another a habitual hatred or a habitual fondness is in some degree a slave…a passionate attachment of one nation for another produces a variety of evils.”