Jameed is a critical ingredient to many high quality Middle Eastern and Mediterranean food recipes and it has a fascinating history that is often misunderstood.

Literally translated from Arabic to English to mean “hardened,” Jameed is made from the Ewe, the female goat or sheep milk. It is processed using a fine woven cheesecloth to make a thick yogurt. Salt is added to make the Jameed even thicker, but liquid Jameed is used as a “stew” when cooking popular Middle East dishes such as fatta, mahshi and Mansaf (mensif, mensiff) which is the national dish of Jordan and often served on a large round platter at family gatherings or celebrations.

Sheep and Goat milk, however, is very different from cow milk. In the Middle East, there were no cows until very recently. There were only goats and sheep. While a cow produces milk all year and must be milked regularly, sheep and goats only produce their milk, or ewe, during the first few months of the year just before giving birth to their young.

There is a very distinct taste difference, too, between cow milk and sheep and goat milk. It’s richer, less fatty. Tastier.

During the remainder of the year, sheep and goats do not produce milk so the people of the Middle East came up with a way to preserve it for use later in the year until the milk season arrived again. They turned the milk into a hardened milk-stone.

In the old days, people used to stock up on the Jameed rocks. You stored them at home to last you the whole year. If you didn’t buy them by July, there were very few quality “rocks” available in the market later in the year.

Liquid Jameed is made from the stone of the Goat/Lamb (Ewe) milk called “Jameed.” Ziyad Brothers Importing uses traditional methods to preserve the unique, authentic and great taste of the Jameed product.

First the, milk from the sheep or goat (Ewe — a female lamb/goat) is fermented, strained and then salted. This step is repeated over and over again. It can take between one day to several days to complete this process. In a typical home, you would strain the milk, soak it, salt it and strain it again using fine mesh cotton cloth. And you would repeat it over and over again. Then, you would let it sit overnight hanging in the soft fine mesh white cloth with the moisture dripping from it as it ferments and creates the soft Labna which is later rolled into small golf-ball sized balls.

At this point, the fermented milk takes on a soft cheese form. It can be rolled into balls and then soaked in sealed jars of olive oil to be preserved so it can be eaten at any time. We call it Labna.

But, when you take the sheep and goat milk one more step to harden it, it becomes Jameed.

Lebanese and Syrians would consume it in a soft form in olive oil. They did not go through the process of drying it. Jordanians and Palestinians would take it one extra step to harden it to preserve it for later use.

This was a process that was used in lieu of refrigeration. Hardening it, or converting it to Jameed, was the only way to preserve the goat and sheep milk to be used later in the year.

In the old days, people used to stock up on the Jameed rocks. You stored them at home to last you the whole year. If you didn’t buy them by July, there were no good rocks available in the market in the Fall.

Ziyad Jameed is the first liquid Jameed that was made available in the food market. Ziyad Jameed removes the entire labor of preparing the Jameed while retaining the highest quality and great taste. It makes it easier but authentic and is the preferred Jameed used in quality Middle East and Mediterranean food recipes.

While the work of hardening to preserve the milk in Jameed form was long an arduous, reconverting it for cooking also took a lot of hard work and time, too.

Humrusue – Mallasa humruse – The cook, usually the wife, would soak the stone and then take the soaked stone and put it on a grater and grate it finely just to get it to liquefy. They add it to fresh water and mix it. Now we use a blender. We would take the suspension and use it as a broth with the meat and meals. Some would put the “rocks” in a bag and beat it to crush it. The crushed Jameed would then be soaked and boialed to create the goat or sheep stock sauce for cooking.

Ziyad Liquid Jameed took all that long process of preparation away from the family housewife who did all the cooking and preparation. It took hours and hours and even a day to prepare.

Ziyad uses the best Jameed rocks purchased at the beginning of the year. Tons is purchased and stored and processed into Liquid Jameed for cooking. The rocks are the size a little bit larger than a baseball.

Nowadays, you don’t have to milk the goat or sheep at the beginning of the season and then go through the arduous fermentation process to preserve it for meals made later throughout the year.

Ziyad Liquid Jameed is as authentic tasting as it can be, as if it were made over the past few days.

Some people flavor the Liquid Jameed by adding yogurt or Labna to give it a preferential flavor. Some cooks can add Ghee or cow fat.

The Jameed sauce is fat free and very healthy. It is made from the hardened Jameed balls that can be stored for long periods until cooked.

The Jameed broth is what makes the meal and while some Western recipes use Jameed alternatives, such as Whey, they can never replicate the original and genuine taste that makes mansaf such a special recipe serving. Only Ziyad Brothers Importing Jameed comes close to perfection and taste, helping families and cooks make the perfect Jameed meal.

Jameed is used in many Middle Eastern or Mediterranean recipes including in Mansaf (mensiff).

Mansaf literally means “explosion” in Arabic, but it refers to the habit of eating so much that you feel stuffed or bloated or “about the burst.” Nesefah. Eating too much. It’s not because the Mansaf is a heavy meal. Mansaf is served usually during important feats, holidays or celebrations where eating is encouraged.

Mansaf consists of bone-in-lamb chunks cooked in the Jameed sauce and served on a bed of rice and toasted almonds or toasted pine nuts, all placed on large beds of thin Bedouin flat bread (either Markook or Shrak), or as an alternative, Syrian (Pita) Bread that is cut in half.

Traditionally, Mansaf is served to celebrate occasions including weddings or events honoring family members or festive holidays. Including to celebrate Christian and Muslim religious events. They include the Eid (Eid ul Fitr, or Eid ul Adha) during  the commemoration of Ramadan in Muslim homes, and also during Easter and Christmas in Christian homes. Click here to read more details about the Islamic Muslim religious holiday of Ramadan.

Being served a Mansaf dish of lamb and rice with Jameed sauce is considered the highest honor a family can bestow on a visiting guest or dignitary not just in Jordan but in almost every Arabian home. The labor-intensive recipe makes it quite a project.

In the deserts and tents of the Bedouin Arabs, Mansaf is eaten with the hands. A guest will grab the rice and ball it up in the palm of their hand with a chuck of lamb. That may still be done for tradition or just fun, symbolizing a closeness among the guests, but in most restaurants that offer Mansaf, the meal is eaten with utensils. In proper Bedouin tradition, when eating using your hands, one hand is used and the fingers must not touch the mouth when eating.

A separate bowl of hot Jameed sauce is often served on the side and it is spoon on top of the rice and lamb while eaten.

Here is one popular recipe for Mansaf: 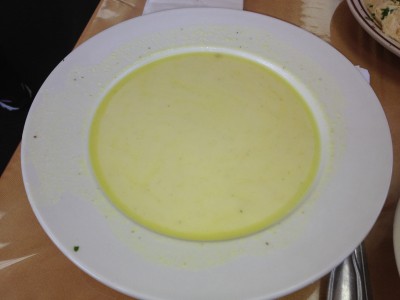 Put the lamb chunks preferably with the bones (have the butcher cut the lamb shoulder into boned chunks) into a pot of water. Make sure the lamb is covered.

Add olive oil and spices. Boil the lamb up to two hours or until the lamb is fork tender.

You can purchase pre-made Jameed from Ziyad Brothers. Put in a pot and stir constantly. Bring to a boil, and then bring the flame down to a low heat and continue stirring. It takes about 60 minutes to properly prepare the Jameed sauce.

Mix the rice, water, olive oil, half the diced onion (with the remainder to be added to the rice after it is cooked). Add turmeric to the rice (gives it its yellow color). Add salt to taste. Add a pinch of Saffron.

When the rice and meal is near completion, add 2 Tblspns olive oil to a small frying pan and grill the pine nuts and/or almond slivers until brown.

Drain stock from lamb (juices from the lamb pot) and mix into the Jameed; add spices. Boil 10 minutes. Remove the cooked lamb and place on the side. 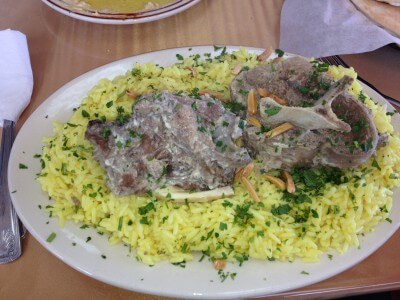 On a large round platter, lay the Pita Bread.

Use some of the Jameed-based stock to soak the bread, which will be the base of the presentation dish. (You want the bread to become soft but not too soupy).

Place the cooked rice on top of the Syrian Bread forming a pyramid. Sprinkle the freshly browned pine nuts and/or almond sliver around on top of the rice. Garnish with chopped parsley.

Place the jameed-based stock, hot, in a side bowl.

Place lamb either in a separate dish or on the side of the rice.

(Ray Hanania is the managing editor of The Arab Daily News www.TheArabDailyNews.com.)