Gracing Arab tables for hundreds of years, Shish Barak is a warm and comforting meal that delights your taste buds with every bite. The stuffed meat dumplings in this traditional Arabic dish are bathed in a creamy and smooth yogurt sauce called, ‘jameed (goats’ milk yogurt)’. The yogurt/soup is healthy and refreshing and could be enjoyed by alone or cooked in dishes to provide just the right amount of ‘tang’.

The art of making jameed, originally found in a hardened/dried ball form, is a tradition that has been practiced by Middle Easterners for years and is said to have been perfected by the Jordanian Bedouins. The ‘harden form’ isn’t easily and readily available in the United States, but Ziyad’s Jameed, ‘ready to use’ soup starter format makes it quite simple to recreate an authentic taste.

The stuffing used in this Shish Barak, is made with ground beef (or lamb) mixed with chopped onions, fresh herbs and seasoned generously with a savory Ziyad Kefta Spice. The dough for the dumplings is delicate and thin and resembles the type used in ravioli. The addition of whole wheat flour to the dough mixture adds a heartier taste, but is only optional.

The dumplings take a bit of time to prepare but is quite easy once you master the concept. Like many Arabic dishes, Shish Barak reaps a tasteful reward your stomach will thank you for.  You can serve them hot or at room temperature; for a bit of zest add a bit of lemon juice to the yogurt sauce while cooking or  to yield a thicker consistency add cornstarch…of course it’s all to your liking!

Note:  It’s important to note that this recipe varies from village to village, and family to family. However, this is authentic and made according to the author’s recipe.

-This recipe can make roughly between 50 and 100 dumplings. Depends on how big you decide to cut the rounds and how thin you roll it.

-Adjust flavor to your taste. This recipe should be used just as a reference. Use your judgment.

Or (if you would like to use whole wheat flour)

Salt and Pepper to adjust to your taste 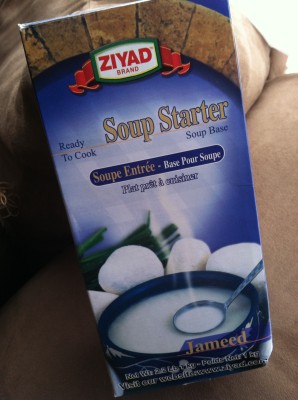 1 box of Ziyad’s Jameed, Soup Starter (cook according to package)

1 cup of cooked rice of your preference

Add flour, salt and sugar into a large bowl and mix. Form a well shape/depression in the middle of the mixture. Drizzle a bit of oil into the well; mix with the dry ingredients and then gradually add the lukewarm water. Continue to knead the mixture until the dough comes together, producing an evenly smooth texture with an elastic-type finish. Add a bit of flour to your hands if the mixture becomes sticky.

Place the dough in a bowl, cover with a towel and place in a warm place for a half an hour/45 minutes. (Another option is to place in a stove that offers a ‘warming’ option, place the bowl covered with a damp towel for about a ½ hr-45 minutes).

In the meantime, combine all the meat stuffing ingredients in a bowl and set aside until ready to use.

When the dough is ready, cut into three or four evenly sized balls. Keep the remaining balls of dough covered with a damp towel. On a lightly floured surface, begin to flatten and roll out one ball at a time until it’s very thin. Cut the dough to produce 1 inch rounds, (this can be done with a cutter or a clean small cap of a bottle)

Place a small amount of meat stuffing on the circle of dough (the amount should not be overflowing). Fold the dough over the mixture and close by pinching the outside edges together. Bring the two ends/corners together, pinch and then tuck under the back of the dumpling or another way would be to roll one edge to the next and tuck the remaining side under the dumpling. However, you manage to produce a small dumpling, should be fine and resemble what’s in the picture.  Place each dumpling on a lightly greased baking sheet. Continue until finished with the remaining dough.

Place the filled cookie sheet[s] in a pre-heated oven of 350F for about 15 to 20 minutes until the dumplings are slightly golden and remove. (You can check the readiness by breaking open a dumpling.) Set aside to cool. You can then continue on with rest of the recipe or freeze the dumplings in a freezer bag, (would suggest no longer than a month, however use your own judgment).

To Complete the Shish Barak:

Prepare the rice of your choice, set to the side. However, if you are making the traditional Arabic pilaf (made with vermicelli noodles), soak the rice for a few hours prior with cold water, rinse then drain. Break a handful of vermicelli noodles into smaller pieces, and then brown in oil over medium heat in a saucepan. Add rice and water (it should come to slightly over the rice), stir together and cook over medium heat and bring to a boil, cover and continue to simmer for another 20 minutes. Set aside and allow water to fully absorb.

Roast two garlic cloves, crush, then set to the side.

To prepare the Ziyad Jameed Yogurt, follow the directions as noted on the box; Shake well before opening. Cut open as illustrated on the box. Mix 1 cup Ziyad soup starter with 1 ½ cups of hot meat broth (In the past I have used both Vegetable broth and Chicken broth). Once finished. Stir in the crushed garlic cloves and add the baked dumplings; (optional) add 1 tbsp of lemon juice or citric acid (for slight sourness) and continue to cook on low heat for about 15-20 minutes until hot and flavors are incorporated. Serve with warm cooked rice. Enjoy!

Note: If you plan to reheat the yogurt sauce, reheat slowly over medium heat to prevent burning.