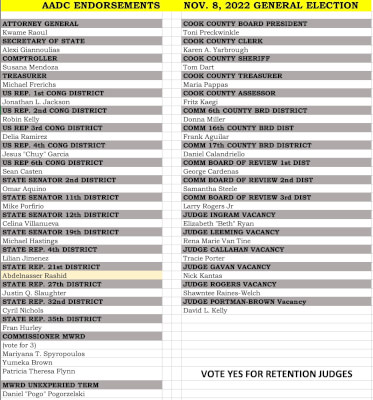 The Arab American Democratic Club released its endorsements for candidates in the November 8, 2022 General Elections.

Those endorsed candidates include a list of the most popular and successful Democrats running for re-electionand for first-time office holder.

The AADC, the largest grassroots Arab American political and government interested organization in Illinois, did not endorse in the Illinois Governor’s race nor in the race for the U.S. Senate, but did endorse all of the major statewide candidates, Cook County candidates and judges.

AADC President Samir Khalil praised all of the endorsed candidates describing them as “the best of the best” and said that each has expressed support for diversity, fairness and inclusion recognizing the rights of the Arab American community. 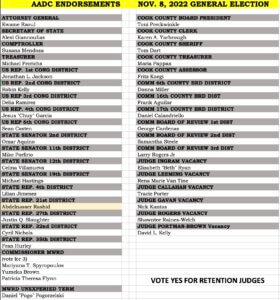 “We are very proud to release this list of endorsed candidates,” Khalil said.

“We urge all Arab Americans and all voters to support these candidates. These candidates have shown respect for our community and recognize that Arab Americans have the same rights as every other person in this state. Of particular attention, we want to showcase the candidacy of a member of our community, Abdelnasser Rashid who is the Democratic Party candidate for the 21st Illinois House District seat.”

Khalil urged voters to vote Yes on all Retention Judges in Cook County.

“There are so many good candidates and every one of them deserves our support,” Hanania said. “But Hastings, Calandriello and Nichols deserve special attention to rebuff extremist challengers and strengthen the voice of moderate Democrats who not only support the Arab American community but who also advocate agendas that serve the needs of all constituents in their respective districts.”

No justice for Americans killed by Israelis American Arabs

Pro-Israel bullying on college campuses is so unAmerican American Arabs

Reviving the Culture of Hamra Street in Lebanon Arab World