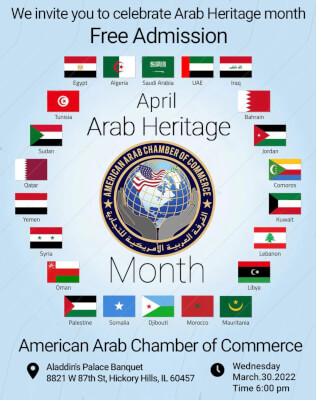 Chamber President Hassan Nijem said that doors will open at 6 PM and the program will begin at 7 PM.

Nijem said that the Arab community and elected officials are invited to attend the event which is being funded by local businesses and sponsors.

There are more than 450,000 Arab American living in the Greater Chicagoland region. The Southwest suburbs have the largest concentration of Palestinian Americans but the community includes Lebanese, Jordanians, Egyptians, Syrians, Yemenis and members of each of the Arab World 22 nations. 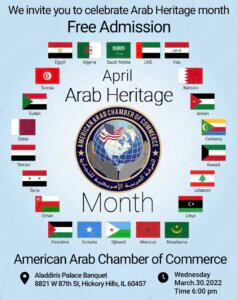 “The theme of the dinner is ‘Unity in our Community’ as an integral part of Arab American Heritage,” Nijem said.

Nijem said that a typical Arabian style dinner will be provided to all the attendees. And while no ticket is required and attendance is free, attendees will be asked to make a donation “if they can and if they wish.”

“We want to thank the community for all that they go through as Arab Americans. Our community is strong. We have pride. We have done so much to help our adopted country as law abiding immigrants and citizens of this great land. We participate in politics, in government in business, in the military, as teachers, as police and firefighters, as engineers, lawyers and as volunteers to help the needy,” Nijem said.

“We have much to be proud about as a community and we want to bring that entire community together.”

During the past year, the American Arab Chamber of Commerce has been on the front line fighting for Arab American rights. The help prevent the closure of more than 22 Arab owned Hookah lounges working with the Chicago City Council to ensure a crackdown on flavored tobacco sales to minors did not close the businesses. City Council members said they had not considered the impact the ordinance would have on the hookah lounges which are only frequented by adult patrons.

In 2018, the American Arab Chamber of Commerce was one of five Illinois Arab organizations to convince the State of Illinois to designate April as Arab American Heritage Month to put it in sync with other Arab community celebrations in other states.

Last year, the American Arab Chamber of Commerce led the fight to stop Chicago Mayor Lori Lightfoot from closing more than 150 Arab owned retail stores in Chicago. After the Chamber organized several press conferences to raise th eissue, Lightfoot backed down and the stores were re-opened.

“When we are unified, we can be successful,” Nijem said. “All it takes is for the community to work together to get things done.”

Nijem thanked the members of the Chamber board for their leadership and their support. They are:

For more information on the American Arab Chamber of Commerce and the Arab Heritage Dinner on March 30, 2022 at Aladdin Banquets in Hickory Hills, visit the chamber’s website at www.AACCUSA.org.