Future Labs develops works authored and directed by Black, Indigenous, Latinx, AAPI and other artists of color, curated by Quenna L. Barrett (Associate Director of Education and Engagement), Jonathan L. Green (Literary and New Works Manager) and Ken-Matt Martin (Associate Producer) and a Goodman Staff Evaluation Team composed of individuals of intersectional identities and in areas across the theater. 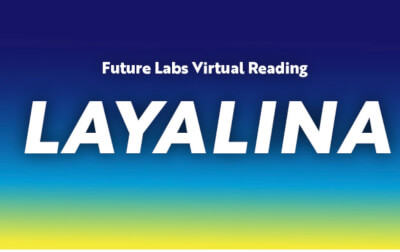 “Layalina is a play about a family’s societal, familial and political survival, and resilience. It’s about the ways in which we help and harm the ones closest to us when our worlds seem to be crashing in on us. It’s fitting that my first workshop as a playwright is happening at the place I frequented as a starry-eyed high school theater student and where I worked my first big professional acting job. I’m so excited for everyone to witness Azar, whom I trust and admire dearly, and this amazing group of humans bring this play to life for the first time.”

In 2003, newlywed Layal plans a future with her family as they prepare to immigrate to the U.S. from Baghdad. Living just outside of Chicago 18 years later, Layal’s life and responsibilities look unimaginably different from what she had envisioned two decades before. Playwright Zebari continues work on Layalina, which was most recently developed with Jackalope Theatre’s Playwrights Lab, led by Calamity West, in late 2020. A ten-minute version of the same play previously appeared in Broken Nose Theatre’s Bechdel Fest at the Den Theatre (2017). As part of Future Labs, Layalina will receive a week-long workshop via Zoom, culminating in this FREE virtual, public reading. This workshop will be led by the playwright and director, with support from Goodman Artistic and Production staff.

Designed primarily for Chicago-based writers who have not had a play produced at the Goodman, Future Labs will feature up to nine workshops and presentations, beginning with Layalina. Selected projects receive rehearsal time, artistic, dramaturgical and casting support and an optional free public reading. This new development series is the latest effort among the Goodman’s programs that support living writers and develop new plays—including New Stages, Playwrights Unit and more than two dozen individual artist commissions.

Playwright Martin Yousif Zebari (he/him) is an Iraqi-born, Assyrian-American multidisciplinary artist based in Chicago. In 2018, he directed Michael Allen Harris’ For the Culture as part of the same festival and costume designed Broken Nose Theatre’s production of The Opportunities of Extinction. As an actor, he has worked with Goodman Theatre (Yasmina’s Necklace and The Winter’s Tale), National Queer Theatre (Mosque4Mosque), The Angle Project (Unpitied/Lost and Guided), Steppenwolf Theatre (Guards at the Taj), Chicago Shakespeare Theater (Mary Stuart), Court Theatre (The Hard Problem), Broken Nose Theatre (Human Terrain), Milwaukee Repertory Theatre (A Christmas Carol), Illinois Shakespeare Festival (Macbeth, Comedy of Errors, Failure: A Love Story and The Magical Mind of Billy Shakespeare) and has appeared on NBC’s Chicago Med. Martin holds a BFA in Acting from the Arts University of Bournemouth, England and is represented by Stewart Talent Chicago.

Director Azar Kazemi (she/her) is first generation Persian-American and the Founding Artistic Director at The Blind Owl, a socially-charged theatre where the political and personal collide. She is thrilled to be working on another new play at the Goodman after directing The Wizards by Ricardo Gamboa as part of the New Stages Festival. Some of Azar’s Chicago directing credits include: the U.S. premiere of debbie tucker green’s dirty butterfly; the Midwest premiere of Jack’s Precious Moment by Samuel D. Hunter, Crave by Sarah Kane and The Coming World by Christopher Shinn. Azar currently serves as the Associate Diversity Advisor at The Theatre School at DePaul where she also teaches classes in Theatre Studies. She is a graduate of DePaul University’s MFA Directing program. Along with the Goodman, Azar has worked at the Oregon Shakespeare Festival, Victory Gardens, Jackalope Theatre, Silk Road Rising, American Theatre Company, Chicago Dramatists and Chicago Shakespeare Theater. In New York City, Azar worked at The New Group where she assistant directed three Off-Broadway productions, two under the direction of her mentor Ethan Hawke.

Chicago’s theater since 1925, Goodman Theatre is a not-for-profit arts and community organization in the heart of the Loop, distinguished by the excellence and scope of its artistic programming and community engagement. Led by Artistic Director Robert Falls and Executive Director Roche Schulfer, the theater’s artistic priorities include new play development (more than 150 world or American premieres), large scale musical theater works and reimagined classics. Artists and productions have earned two Pulitzer Prizes, 22 Tony Awards and more than 160 Jeff Awards, among other accolades. The Goodman is the first theater in the world to produce all 10 plays in August Wilson’s “American Century Cycle.” Its longtime annual holiday tradition A Christmas Carol, now in its fourth decade, has created a new generation of theatergoers in Chicago. The Goodman also frequently serves as a production and program partner with national and international companies and Chicago’s Off-Loop theaters.

As a cultural and community organization invested in quality, diversity and community, Goodman Theatre is committed to using the art of theater for a better Chicago. Using the tools of the theatrical profession, the Goodman’s Education and Engagement programs aim to develop generations of citizens who understand the cultures and stories of diverse voices. The Goodman’s Alice Rapoport Center for Education and Engagement is the home of these programs, which are offered free of charge for Chicago youth—85% of whom come from underserved communities—schools and life-long learners.

Goodman Theatre was founded by William O. Goodman and his family in honor of their son Kenneth, an important figure in Chicago’s cultural renaissance in the early 1900s. The Goodman family’s legacy lives on through the continued work and dedication of Kenneth’s family, including Albert Ivar Goodman, who with his late mother, Edith-Marie Appleton, contributed the necessary funds for the creation of the new Goodman center in 2000.