Saudi King Urges Stronger Partnership with the US to Fight Terrorism

Custodian of the Two Holy Mosques King Salman bin Abdulaziz today urged Arab nations to promote a genuine partnership with the United States of America and fight “the forces of evil and extremism” together. He made the remarks at the historic Arab Islamic American Summit today in Riyadh, where he and U.S. President Donald Trump urged more than 50 leaders from the Arab and Muslim world to cooperate in the fight against terrorism.

King Salman thanked President Trump for visiting Saudi Arabia on his first official trip abroad. He praised the Kingdom’s partnership with the U.S., which he said was aimed at achieving “peace, security and positive development.”

“We are meeting today at this summit to express the seriousness in taking rapid steps to promote a genuine partnership with the friendly United States of America in a way that serves our common interests and contributes to achieving security, peace and development for all mankind, which is confirmed by our Islamic religion,” said King Salman.

“Due to our responsibility before God and then before our peoples and the world, we have to stand united to fight the forces of evil and extremism whatever their source,” said King Salman. 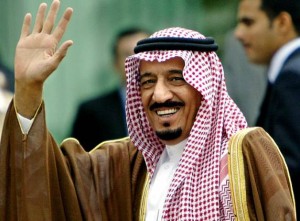 “The Iranian regime has been the spearhead of terrorism since the Khomeini revolution until today,” said King Salman.

Following the Summit, King Salman and President Trump inaugurated the Center for Combating Extremist Ideology. The Center will work to counter and prevent the spread of extremism by promoting moderation, compassion and productive dialogue.

This is distributed by Qorvis MSLGROUP on behalf of the Royal Embassy of Saudi Arabia. Additional information is available at the Department of Justice, Washington, D.C.